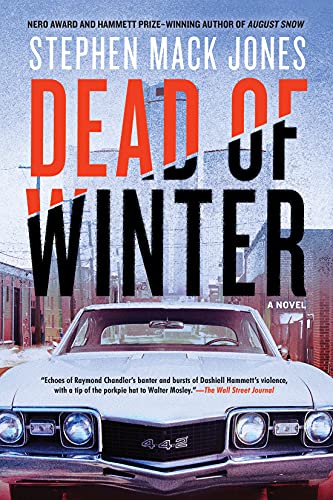 “Dead of Winter is a formulaic hodge-podge that will appeal to readers who like Detroit, Jack Reacher-style violence, and enticing references to local cuisine.”

August Snow, the former Detroit cop who’s now a wealthy factor to be reckoned with in his native Mexicantown neighborhood, is asked to attend a meeting with the owner of a local company, Authentico Foods.

Snow has known Ronaldo Ochoa for years, and he’s saddened that the old man is finally about to succumb to the cancer he’s fought off twice before. More than that, he’s shocked when Ochoa asks him to buy out his business to keep it out of unscrupulous hands.

What follows is a turbulent descent into violence and betrayal as Snow battles messy winter weather, hitmen, and scheming crime lords to unravel the sudden and mysterious interest in Mexicantown as a clandestine real estate development target.

Dead of Winter is the third novel in the August Snow series by Stephen Mack Jones, following his debut August Snow (2017) and Lives Laid Away (2019). A native of Lansing, Michigan, Jones won the prestigious Hammett Prize and the Nero Award for August Snow, and was nominated for the Steel Dagger Award for the second novel. An ABC series is also apparently in development.

While such accolades would suggest the author is one that new readers will certainly want to begin following, it might be best to proceed with caution. Hammett Prize notwithstanding, Jones writes like an amateur chef ransacking his kitchen for ingredients to match a recipe in his head that’s going in six different directions at once.

Snow’s half African American and half Mexican American, half Catholic and half joyous vigilante, half potty mouth and half deep thinker, half ex-cop and half thug. His love interest, Tatina, is half German and half Somali, lives in Norway, has a doctorate in cultural anthropology, and speaks seven languages. Something for everyone, it would seem.

Similarly, the plot is composed of many moving pieces that don’t seem to fit together quite properly. The situation with Authentico Foods and Ochoa’s daughter, a former Snow crush, is interesting to start with, but it soon fades into the background as shootings and beatings lead Snow in another direction altogether, and then another, and then another.

Once the whole idea behind the real estate situation becomes clear, it proves to be a somewhat interesting concept that, unfortunately, Jones does very little to develop. It’s also vaguely reminiscent of the hidden secret in David Baldacci’s novel Redemption, and the idea didn’t work terribly well there, either.

Jones seems to be focusing so intently on Snow and his multifaceted personality and lifestyle that the story comes off as merely a convenient vehicle for more violence, ethnic food, and fun in the snow-filled streets with his classic 1968 Oldsmobile 442.

Dialogue is another element of fiction that doesn’t come naturally to this author. Snow will flip from mean-mouthed garbage to poignant, philosophical insight so fast it’ll give you whiplash. Furthermore, the tough-guy muscularity of his characters is so heavily laden with references to testicles, excrement, and shoving used jockstraps down people’s throats that after a while it just gets a little tiresome.

The ethnic food, though, is rather fun. A third of the way through the story, Snow makes a chili based on his father’s recipe. Featuring jalapeños and Vidalia onions, ground beef and stew beef, molasses, bacon, and beer, it begs to be bookmarked for future reference. Where’s your shopping list? Make sure to grab everything you’ll need to try this one.

At the end of the day, however, Dead of Winter is a formulaic hodge-podge that will appeal to readers who like Detroit, Jack Reacher-style violence, and enticing references to local cuisine. Beyond that, perhaps your money might be better spent elsewhere. By the way, what’s for dinner?