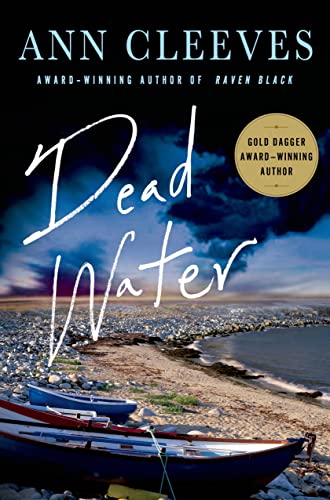 "Dead Water shows these universals through the uniqueness of its setting and characters, adding another award-quality book to Ms. Cleeves’s body of work."

Ann Cleeves’s new entry in her Shetland Island mystery series is very much a novel about place.

The crime rises out of it, as do the characters, taking the reader to an isolated part of the world few of us will ever visit. But by the end of the book, many of us will want to.

This volume is a good point in the ongoing story to introduce new readers to the lead character, Inspector Jimmy Perez. The series was originally designed as a quartet, which came to a harsh closure for Perez at the end of book 4.

Dead Water, book 5, restarts his life in new circumstances, and gently covers his revival from debilitating depression. That makes it a good book for established readers, too, who care about what happened to him and want his story to continue.

He recovers from grief by joining a new Detective Inspector, Willow Reeves, in digging out the truth about a journalist’s murder. Willow is brought in from outside to head the investigation but needs local knowledge to give her a chance at success.

Perez, a reluctant helper at first, slowly eases back into harness with her, unaware for quite a while that he’s actually recovering. His disjointed thoughts and emotions lead him to view the case through a different lens and ultimately to espy a motive everyone else overlooks.

That’s tough to do, because the whole book is a red herring. Each line of investigation follows logically from the last, and leads to a dead end. The puzzle pieces defy a unifying theme, suggesting that the murderer might get away with it.

The narrative changes point of view at chapter breaks, cycling through Perez; Willow; Rhona Laing, the island’s Fiscal; and Sandy Wilson, Perez’s loyal sergeant. Each is deeply drawn, and the transitions between them are smooth and clear, weaving together to build the story.

As the characters move around the islands over the course of investigation, Cleeves also weaves together a picture of that remote place and its culture, clashing old against new.

Her writing style is weaverly, in general, threading details about the light, the rain, the view through the action and dialogue, always setting or enhancing a mood.

Overall, the book’s mood is dark with hopeful shafts of light, alternating with sad and tired. “Shetland didn’t do pretty,” Cleeves writes. “It did wild and bleak and dramatic, but pretty would have been out of place.”

The wild bleakness permeates the tale and leaves behind an aftertaste. For those of us who live thousands of miles away, it’s easy to think someone could get away with murder in such a place.

But people are people everywhere, and murder remains a detestable crime. Dead Water shows these universals through the uniqueness of its setting and characters, adding another award-quality book to Ms. Cleeves’s body of work.