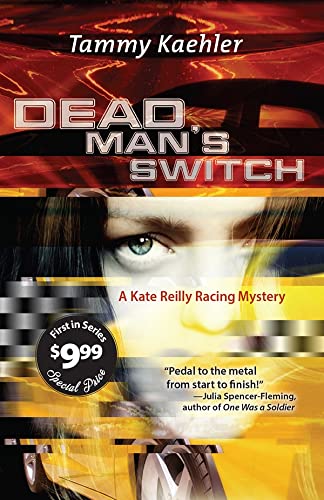 “What could be better than the high-speed, high-stakes, high-danger and testosterone-fueled venue of race car driving filled with competitive men with a spunky Irish girl determined to win in a man’s world? . . . Protagonist Kate has a great deal of potential—and so does Ms Kaehler.”

Mystery readers want a clever plot and a compelling sleuth plus enough suspense and danger to keep the pages turning. They also look for a strong sense of place, a setting that often serves as a character and not merely as backdrop. What could be better than the high-speed, high-stakes, high-danger and testosterone-fueled venue of race car driving filled with competitive men with a spunky Irish girl determined to win in a man’s world?

Debut novelist Tammy Kaehler skillfully brings readers into this assiduously researched locale with such detail that one can smell the fuel and hear the cacophonous roar of the huge engines. We see the flags waving, feel the confinement of the cockpit, and sense the Gs pressing our spines into the seats around every turn. We learn a great deal about safety equipment, fire-resistant suits, pit crew procedure, track design, classifications of race cars, the function of ECUs (engine control units, the engine’s computer), steering and braking techniques, and so on. And on. The descriptive details of setting frequently threaten to put the brakes on the story and overshadow the heroine who becomes less interesting than the explosive setting.

Even so, there is a lot to like in this entertaining cozy in which aspiring driver Kate Reilly hopes to get a position in the American Le Mans Series and only receives it after stumbling over a dead driver, thereafter replacing him in the race. This coincidence makes her a prime suspect, motivating her to find the killer and clear her name while preparing to race a Corvette at Lime Rock Park.

While under suspicion, Kate works to blend into the all-male race car team, know her car, and conduct her own investigation. She meets plenty of other suspects with a strong enough motive to bump off the unlikeable victim. She also discovers the dead man’s blackmail list with mysterious markings, observes unexplained and potentially fatal performance problems in trial runs, interviews a jealous husband and adulterous wife, and notices how corporate sponsors, drivers, and even crew members are all glad the victim is gone.

With the big race approaching fast, Kate must sort through the alibis, lies, rumors, and resentments to find out who was really driven to kill.

The big race itself is the climax of the story, and it is rendered in pulse-pounding authenticity. Yet there is no danger in it apart from the hazards of the race itself, and Kate is never truly in jeopardy from being killed before discovering the truth.

The climax of the mystery, then, comes as an anticlimax to the climax of what seems the real story: the story of the big race. The “race” to identify the killer becomes the “B” story to the “A” story of the Le Mans race.

Dick Francis took readers into the world of horse racing, offering enough local color to motivate characters and to spur the story forward, not drum it out. One might hope that Ms. Kaehler, formerly a technical documentation writer, can learn from this. Now that so much of the technical documentation of the auto racing world has been spilled in the opening book of this projected series, one might look for a deepening of Kate’s character, a more distinctive voice for her, and a layered backstory of her family in the sequels.

Protagonist Kate has a great deal of potential—and so does Ms Kaehler.