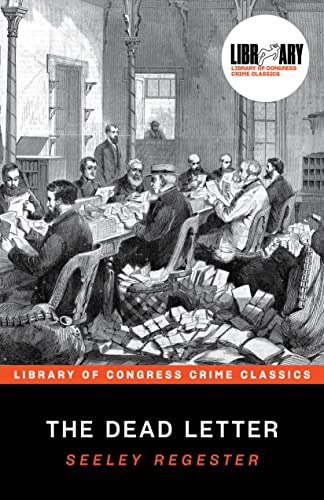 “The Dead Letter is worthy of your attention, not only as an interesting landmark in the history of American crime fiction, but also as an enjoyable, entertaining reading experience.”

On a stormy autumn evening, young Henry Moreland struggles through the wind and rain from the Blankville, New York, train station to the home of his fiancée, Eleanor Argyll. Along the way, someone emerges from the darkness and fatally stabs him in the back, leaving his body to be found the next morning when the storm has subsided.

Richard Redfield, a friend of the Argyll family, is devastated by the murder. Although secretly in love with Eleanor, he admired Moreland and vows to find the killer and bring them to justice.

When suspicion falls on him, Richard leaves Blankville for Washington, DC, where he finds a job in a government office processing lost and undelivered postal items. However, when he finds a dead letter that clearly relates to Moreland’s murder, he undertakes to clear his name and solve the mystery once and for all.

The Dead Letter was published more than 150 years ago by Metta Victoria Fuller Victor writing as Seeley Regester, and the story of its place in the history of American crime fiction is as interesting in its own right as the tale of Richard Redfield itself.

While Englishman Wilkie Collins is generally regarded as having written the first mystery novels, including The Woman in White (1859) and The Moonstone (1868), his work was predated by the short stories of the American writer Edgar Allan Poe, specifically “The Murders in the Rue Morgue” (1841), “The Mystery of Marie Rogêt” (1842), and “The Purloined Letter” (1844).

Its relative obscurity over the years may be explained in part by the fact that it was published by Beadle and Company, whose general editor, the tireless Orville J. Victor, was Metta’s husband. Beadle was well known in the 1860s as a publisher of dime novels—popular fiction aimed at a working-class audience thirsty for reading material at an affordable price.

Metta herself contributed to the large volume of dime fiction poured into the market by Beadle with dozens of titles under various pseudonyms, of which Seeley Regester was but one. Given Beadle’s reputation for churning out romanticized and sensationalized stories with minimal literary quality, it’s understandable that The Dead Letter ended up experiencing the same fate as the fictional correspondence from which this novel took its title—out of circulation and essentially forgotten.

Nevertheless, this latest addition to the Library of Congress Crime Classics series is interesting not only as a historical document that deserves renewed attention but also for the character of Mr. Burton, a full-fledged police detective who leads the Moreland investigation.

Formerly a forwarding-merchant, Mr. Burton was the victim of a warehouse arson that set him on the path to a new career in criminal investigation with the city’s “detective-police.” Portrayed as an intelligent man of high integrity, his favorite motto is “learn to labor, and to wait.”

Richard describes him as being “one of those minds that would have kept silence seven years, rather than speak a moment too soon.” Which would likely explain why the investigation takes so long to conclude.

Mr. Burton is interesting for other reasons as well. He’s a devoted graphologist, experienced in handwriting analysis as a means to assess personality, long before it became accepted in criminal investigation, as editor Klinger explains in a footnote.

“Call it instinct, magnetism, clairvoyancy, or remarkable nervous and mental perception. Whatever it is, it enables me, often, to feel the presence of criminals.”

Furthermore, Mr. Burton is a widower whose young daughter, Lenore, is gifted with even more advanced powers of clairvoyance. The detective hypnotizes her twice to discover the whereabouts of suspects in the Moreland case, and in both instances her information is quite accurate.

Supplementing her detective story with a layer that moves beyond the straightforward “ratiocination” of Dupin, the author invokes Poe’s dark, meditative tendencies as well, not only through the girl’s power and her name (“the lost Lenore”!), but also through passages that carry a heavy metaphysical charge. Consider Richard’s gloomy contemplation of the cemetery in which Moreland lies buried:

“Beautiful and silent city! There the costly and gleaming portals, raised at the entrance of those mansions, tell us the name and age of the inhabitants, but the inhabitants themselves we never behold. Knock as loud and long as we may at those marble doors, cry, entreat, implore, they hold themselves invisible. . . . City of the dead—to which that city of the living must soon remove—who is there that can walk thy silent streets without a prescience of the time when he, too, will take up his abode in thee forever?”

One example among many in which the author works diligently to develop a somber, Poe-like atmosphere within her detective story, raising the level of literary quality somewhat above what one might expect in a dime novel.

As a result, this reissue of The Dead Letter is worthy of your attention, not only as an interesting landmark in the history of American crime fiction, but also as an enjoyable, entertaining reading experience.