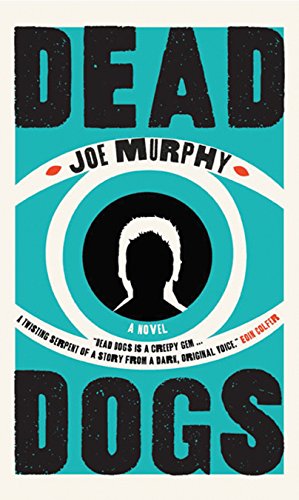 “Where I am now doesn’t really matter. What matters is how I got here. How we, how me and Seán, saw that girl getting killed and all the stuff that happened after. And all the stuff that happened before. I saw her getting killed—I know I saw. Seán and me grew up in a town the rest of the world has closed its eyes to. The town we grew up in is a cartoon. A cartoon where we’re the butt of every joke, the cloud of dust at the end of every falling anvil. Seán wasn’t like the rest of us. Seán isn’t like anyone. Seán does stuff to things, things like cats and dogs and guinea pigs. Bad stuff; he can’t help it. Dead dogs and a murder. This is how I got here. I saw it happen. I really, really saw it.”

The sixteen-year-old nameless narrator of Dead Dogs is best friend to Seán Galvin, a troubled teenager for whom trouble seems a second skin.

Not that Seán means to bring trouble into his life; it just seems to follow everywhere he goes. Sometimes he kills things accidentally, like dogs and puppies; sometimes he hurts people when playing sport and games.

Sometimes he hurts on purpose.

Most times, however, he’s fine—provided he keeps taking his pills, the little red ones that sort of glisten, like they’re moist, the ones the highly respected Dr. Thorpe continues to recommend.

The boys are united in most things they do, be it sport or just horsing about in school. But the bond doesn’t stop there. There are no mothers in their households, and their fathers are barely able to cope with their present situation or the hand that fate has seemingly given them.

Both the narrator and Seán live in a small town in rural Wexford, Ireland, and to say everyone knows everyone else’s business would be an understatement. Most of the townsfolk regard the boys as troublemakers or freaks, the community they live in literally shunning them.

The friends’ past behavior labels them not to be trusted in anything they say or do—and this comes back to haunt them later in the story.

Perhaps a more revealing aspect of their initial friendship comes from an anecdote disclosed to the reader by the narrator early on in the story during a ball game:

“One thing that always stands out like a wart in my memory is that Seán would only give the ball back to me. No matter who owned it, he would never, ever, give it back to them. Not ever. Not even when next summer the lads start to beat him. Not even next summer with tears in his eyes and blood climbing the cracks between his teeth and he has to hide in the coal shed, would he give them back the ball.

“Ever since that day, I have to get the ball back on my own. The lads make me because of the sound of Seán’s big fist breaking Jamie Anderson’s nose, I think, makes everyone afraid. Not me though. I’ve never been afraid of Seán. Not even when the bad things start to happen.

The “now” becomes the catalyst for all hell to break loose. Seán sees a pregnant dog being hit by a car and left to die on the roadside. He decides naively to cut open the dog and play with the puppies inside, before realizing the puppies are as dead as their mother.

Panicking, he then proceeds to put the dead pups back in the once warm and fat belly, before turning to the only person he trusts in his bloody and nightmarish world: the narrator.

Any other person would have given up on Seán a long time ago, but the narrator is a true friend and recommends to Seán that he now needs to see Dr. Thorpe to either increase the medication or perhaps get something different. Agreeing, Seán accompanies the narrator to the opulent and high-walled home of Dr. Thorpe.

Despite all the lights being on in the house, no one answers the bell at the front gates at which Seán and the narrator seem to be standing forever. A nervous Seán wants to go home, but the narrator is having none of it, eventually coming up with a plan to scale the mighty walls.

Once inside the grounds, they proceed directly to the house. Just as they get to the front door, a terrifying scream is heard, making Seán even more nervous.

The narrator lifts the letterbox and is horrified to see highly respected Dr. Thorpe, naked, beating a red-haired woman, also naked. Within seconds the woman is dead, murdered by Thorpe.

But is everything as it seems? Did Thorpe actually murder anyone? Or was it imagined by the narrator, brought on by the stress of the last few hours with Seán?

Dark and unsettling, Dead Dogs is a modern-day gothic story powered by scenes of horror and comedy, masterfully created by Mr. Murphy’s hauntingly beautiful prose. It is evident from the very first page that the reader is in for something special—and what a special something it turns out to be. Extraordinary.