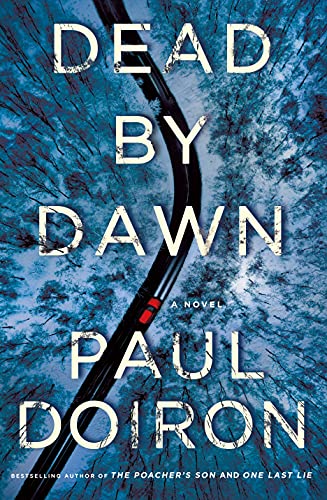 Most people who live in hilly terrain with a cold season, anywhere around the world, know the fear of sliding off an icy road into a ravine or river. In Dead by Dawn, book 12 of the Mike Bowditch crime series, that’s exactly what happens to the protagonist on a nasty winter night right before Christmas.

Two important differences from our ordinary fear of this disaster: (1) Somebody forces Mike off the road by throwing tire-exploding spikes across it, and (2) he has a half-wild wolf in a cage in the back of his truck.

Another important difference: Mike Bowditch, investigator for the Maine Warden Service, has been trained in wilderness survival and is physically fit and fast thinking. The rest of us would die as soon as our vehicle broke through the ice into the fatally frigid water.

The novel opens with the shocking plunge. Then it immediately bifurcates into two storylines. One is Mike’s ordeal to stay alive when everything he needs to do so is at the bottom of the river in his truck (except the wolf). The other is what led up to his nightmare and its outcome.

These are conveyed in alternating chapters switching between the present-tense narrative of his struggle and the past-tense narrative of who, why, and how. They steadily converge into a violent climax. En route, readers are treated to a harrowing survival drama and a bewildering mystery arising from a case in Mike’s past.

That backstory comprises an earlier volume, so readers who have been following the series will likely recognize it, before or after the reveal, whereas those who entered the series later won’t get the connection. However, enough information is provided to satisfy both groups without slowing down the plot.

The survival half of the story is not only harrowing but educational. It could be that a life is saved down the line because someone learned a crucial fact, or at least the correct approach to a crisis that makes the difference between life, death, or injury. We’ll probably never know if such a thing happens, but the information built into the novel provides a bonus element that warrants paying close attention to the logistics.

The crime half of the story offers a different type of terror. Bad enough being helpless against Nature’s power; add in human evil, and there’s hardly a moment without fear. Mike confronts it and works through it, keeping his emotions from sabotaging him, though they boil inside and spike through to the surface in his most torturous moments.

He knows he’s his own worst enemy, admitting, “Curiosity would always trump my petty resentments, let alone my better judgment” and “The tomcat who climbs to the top of a tree with no plan on returning safely to the ground—that would always be me.”

But he can reverse that into strength: “I am in pain and I am afraid. Mostly though, I am mad as hell for getting myself into this predicament. . . . Rage can be a poison, but it can also be fuel.”

It keeps his brain in gear, which is his only way out of the situation. And here’s where Mike’s relationship with his environment—the series’ signature quality—comes into play. He knows the Maine wilderness and its denizens intimately, and he remembers all he’s been taught by his training, his mentor, and his own bruising experience. These give him an edge over the people hunting him through the night relying on high-tech equipment and gear.

While everything seems to be stacked against Mike, he can see and use the tiniest advantage, which keeps him one step ahead even when all seems lost. His misadventures feel plausible because of his specialized knowledge. In its absence, he might appear like a cartoon superhero instead of a realistic, credible man.

Kudos to the author for doing his homework—here, and throughout the series. Not just on the technical side but in studying and portraying character. Indeed, sometimes it’s uncertain whether the author has immersed himself totally into Mike’s head or vice versa. Doesn’t matter, because the result is compelling. We Are There with Mike, every word, paragraph, and scene.

The book’s only weak point, perhaps, comes in its tempo. As an action thriller, it is and should be lean, crisp, and fast. This volume feels almost too fast, owing to the constant flip-flop between past and present. Each chapter is brief, capturing one scene or aspect of a larger scene in progress, barely giving the reader time to orient to the viewpoint change before it changes back again.

The super-staccato effect gets wearying and may discourage readers from plowing through in one session like thrillers are designed to do. Okay, so you just read in shorter installments until you recover your breath. You won’t want to stay away long, because Dead by Dawn gives all the action, danger, excruciating choices, high stakes, and original dilemmas you could ask for in a crime thriller. At the same time, you get the character insight and growth that make this one of the strongest series in the genre.