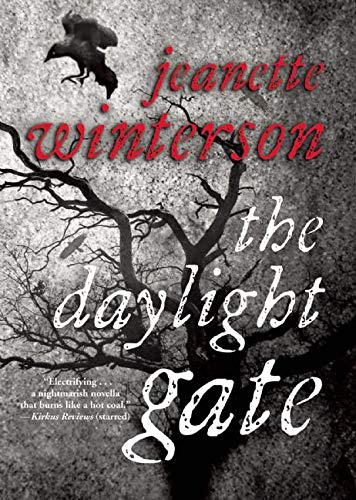 “Doom hangs over this book, but doesn’t inhabit it.”

This novella is Jeanette Winterson’s take on the 1612 Pendle Hill witch trials in the north of England. It’s easy to see why this subject matter interests her—touching upon religion, social inequity, homophobia, and gender roles— but it’s not woven together to provide a compelling read.

King James and his minions (it is just five years after the Guy Fawkes gunpowder plot, in which Catholics hatched a failed assassination attempt) are trying to stamp out all traces of “popery.” They want a unified England under the Church of England. It’s easy to see why both Catholics and witches were dangerous to the crown. Who can control fanatics?

Maybe the eleven citizens who went to trial—nine women and two men—were Catholics, albeit practicing in secret. Perhaps they were scapegoats killed in order to show what would happen to Catholics or anyone else who questioned the Crown.

Maybe they were really witches.

As source material Jeanette Winterson uses transcripts of the official trial The Wonderfull Discoverie of Witches in the Countie of Lancaster written by eyewitness Thomas Potts, clerk to the court. He has every reason to be loyal to the King. But the author shows him as a buffoon; why not imbue him with some serious concerns that reflect the general populace’s concerns?

But she doesn’t wholeheartedly support the other side either. It would be easy, showing the horror of being unjustly accused, of merely being poor and possibly Catholic. But Ms. Winterson, as is her wont, takes it one step further and gives the accused magical powers. Why else, she seems to reason, could accused witch Alice Nutter acquire land and stay youthful year after year?

But by blurring fact and fiction, Catholic or witch, rich or poor, the narrative becomes so jumbled the book comes off as more confusing than enlightening.
What is more exasperating is that the author has shown, and it happens in flashes here, she can really write. The Daylight Gate contains some beautiful descriptions.

“The hill itself is low and massy, flat-topped brooding disappeared in the mists treacherous with bogs, run through with fast flowing streams plunging into waterfalls crashing down into unknown pools.”

Doom hangs over the book, but doesn’t inhabit it.

It seems one can be beautiful and have power but can’t get out of jail. And all the witchcraft power in the world can’t stop some men from performing awful acts, including child abuse and rape.

And maybe that’s the point—power, even from another realm can’t fix what’s wrong in this one.