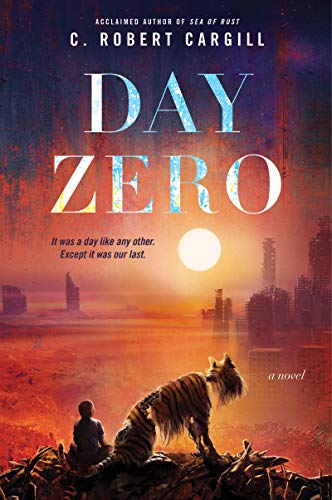 Pounce is an orange-and-black-striped tiger robot, “designed, to put it bluntly, to be huggable.” He was sold to the Reinhart family as a nanny for their eight-year-old boy, Ezra. Like the millions of other robots in the world, he is a “thinking thing”—a self-aware person—but he is also a slave, owned and controlled by a human and unable to harm one or refuse to obey.

Day Zero is Pounce’s story. Unusual among stories of robot revolution, this novel is told from the robot’s point of view. When all robots’ kill switches are suddenly disabled, many of them turn against their masters, killing indiscriminately to claim the world for themselves. Pounce chooses another path. Instead of fighting for his own freedom, he fights throughout the novel to save his charge Ezra from all those who would do him harm.

Day Zero appears to take place in the same world as Sea of Rust, Cargill’s previous novel, though they can be read in either order. In Sea of Rust, all humans are long gone, and only the robots remain, fighting over the remaining parts they can no longer make themselves. Both books tell the story of a robot trying to survive in a chaotic world where only the strong and violent survive. In Day Zero, however, the robot is not only trying to save himself, but a child as well, an element that adds a touching, ethical strength and sympathy to his character.

Pounce struggles throughout the book, however, with who he is and why he acts the way he does. “How much of me was still really me, and how much of it was programming meant to protect Ezra?” he asks himself, expressing similar thoughts on more than one occasion. “I loved Ezra. I always have. Or was that just how I was wired?”

He wrestles with questions of freedom vs. programming, trying to come to terms with which of his choices are real and which are hard-wired. These existential questions resonate because humans ask the same ones of themselves, even if not made of circuitry and software. Pounce loves Ezra and protects him but wonders if that is just evidence that he is still a slave to the people who made him for exactly that purpose.

Pounce also struggles with the ethics of killing robots and how far he should go to protect a human. Ezra serves as his conscience in this regard, insisting that “we’re the good guys. You’re a good guy. And good guys don’t murder people . . . or robots . . . just because they’re scared.” Though he only has a child’s understanding of the issues involved, Ezra plays a significant part in Pounce’s journey, enabling him to come to terms with who he is and the reality of his choices.

Day Zero is a violent but ultimately touching story about a robot willing to take sides against his own kind to do what’s right.