The Day of the Lie: A Father Anselm Thriller 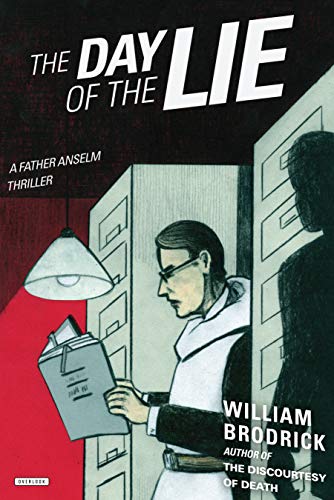 William Brodrick was an Augustinian friar before leaving the order to become a lawyer and a novelist. His protagonist, Father Anselm Duffy, was a lawyer before leaving practice to become a Gilbertine monk. In The Day of the Lie, the fourth thriller in the series, Brodrick sends Father Anselm to Warsaw, Poland to delve into the mystery of Róża Mojewska, a long-time member of the underground resistance seeking help to resolve a difficult problem from her past.

Betrayed twice to the SB, the Communist Secret Police in Poland, Róża endured two different periods of incarceration, one in the 1950s and another in the 1980s, both brought about by her SB tormenter Otto Brack’s obsession with learning the identity of The Shoemaker, a brilliant dissident pamphleteer to whom Róża has been linked. Drawn into the mystery by a friend and former journalist who was present when Róża was captured, Father Anselm travels to Warsaw to learn the identity of the mysterious informer who betrayed Róża, and to reveal the secret she has carried all these years.

Father Anselm’s investigative methods typically involve a great deal of documentary research, and such is the case once again in The Day of the Lie as he pores over files and government records preserved by the Institute of National Remembrance from the former Communist regime. Piece by piece he assembles a fragmentary understanding of what happened to Róża in both time periods. Early in the novel Brodrick describes Father Anselm’s research technique:

“Anselm read the document three times with increasing attentiveness—a monastic practice vaguely similar to deep sea diving without the benefit of lead boots, each appraisal an attempt to break beneath the surface tension of the page. The objective: to descend into the dark and find the strange light not always visible from the side of the boat. He lingered here and there on individual phrases, letting his mind sink and swim where it willed.”

A better description could not be found for the experience of reading a Brodrick novel. The Day of the Lie is not a page-turner. The reader does not race toward the finish line in breathless anticipation of the final solution of the mystery. One reads slowly, enjoying Brodrick’s elegant prose style, his thoughtful insights into the human mind and the human condition, and his careful consideration of the themes of regret, guilt, and moral fortitude.

Brodrick’s characters likewise deserve our time. Father Anselm would perhaps prefer to adhere to his Prior’s “monastery walls” policy, which emphasizes “the importance of the enclosure, and . . . the withdrawn nature of Larkwood’s communal life, its witness of recollection and stability to people forever on the move.” And yet once again he’s drawn away from Larkwood and his bees and gardens into someone else’s mystery. This push and pull between the monastery and the outer world, and its effects on Father Anselm, form a key part of what makes his character so endearing.

A problem with The Day of the Lie, however, lies in the fact that Brodrick’s plot constantly moves back and forth along the timeline. At one point the reader is pulled deep into Róża’s arrest and imprisonment in the 1950s, then one surfaces to Father Anselm’s present-day investigation before dropping back down again, but this time into her second incarceration in the 1980s. By the time the reader has made it two-thirds of the way through the novel, it has become difficult to remember which events happened during which imprisonment.

Despite this somewhat convoluted recitation of the past and the overall slowness of the story, The Day of the Lie is a highly-rewarding novel to read. Its ancillary characters are engaging, and Father Anselm is not to be missed.

Brodrick is an expressive writer who displays a steady voice and a sure hand with his characters, his sense of history, and his exploration of powerful themes. The Father Anselm thriller series is highly recommended. Also recommended, however, is that readers set aside adequate time to do his novels justice.