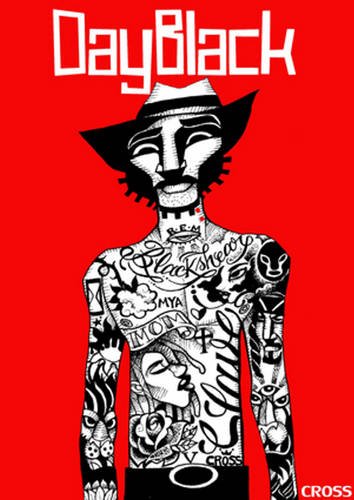 Keef Cross’ DayBlack is not your typical graphic novel in terms of images or plot.  Trained as both a tattoo artist and painter, Cross creates drawings reminiscent of tattoos, and the storyline of a former slave turned vampire brings to mind African American speculative fiction, such as Jewelle Gomez’ The Gilda Stories.

DayBlack is the name of a fictional post-industrial city in Georgia with pollution so thick that “there is no night or day, only DayBlack.” This is an ideal home for Merce, a 400-year-old vampire.

Merce describes the immortality of vampirism as both being dead and living forever. Just before climbing out of his coffin, he momentarily forgets that he is dead—that is dead to his old life, before he was “turned.” He describes his life after being bit by a vampire as a life sentence “like playing a video game with all the cheat codes.”

Over his many years, Merce tries his hands at a number of professions in an attempt to find fulfillment, but for the moment he is working as a tattoo artist.  This may seem less exciting than his previous employment as a mercenary or astronaut, but it is actually an ideal profession for someone with a predilection for blood.

Merce is a technologically savvy vampire, so he does not have to resort to bites to suck his blood. He uses a special tattoo gun that extracts blood and sends it to his coffee maker to keep it warm. Merce seems to be managing his condition well with the exception of his narcolepsy which has him falling asleep at the most inconvenient times.

Cross takes the reader through the difficulties associated with Merce’s narcolepsy, while also unfolding his past through clues in his dreams about his life before he was bitten. And of course the story would not be complete without the threat of vampire hunters who converge on DayBlack in search of Merce.

Cross includes many of the typical vampire tale tropes, but he also takes liberties with vampire lore. For example, Merce does not have a reflection so he cannot send selfies to his fans, but he is not bothered by the sight of crosses because he was irreligious prior to being turned into a vampire. Horror fans and non-Horror fans alike can appreciate Cross’ humorous rendition of the vampire tale.

The images are particularly well suited to the text in that they are primarily in black and white with periodic pops of red. The simple color design calls attention to the importance of blood as well as the lack of light in DayBlack.

The illustrations also contribute to the urban mood of the story suggested by subtle references in the images such as a Mos Def tank top and the collage of images on Merce’s coffin featuring Django, Outkast, Dead Prez, and The Chronic among other film and music allusions. Cross has given readers a hip-hop inspired vampire tired of killing but still battling his own demons.