The Dawn of Everything: A New History of Humanity 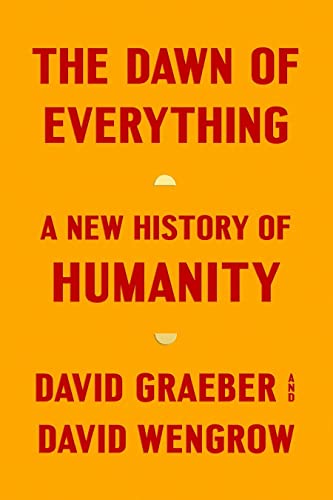 “This sweeping and novel synthesis exploring the arc of the human condition— its highly diverse forms of political organizing, and the future that lays in store for us—may well prove to be the most important book of the decade. For it explodes deeply held myths about the inevitability of our social lives dominated by the state.”

Graeber and Wengrow have the incredible gift of asking big questions while addressing them in new and novel ways that challenge common wisdom narratives. For example, they ask whether we are doomed to live in hierarchical and highly unequal sovereign states as the pinnacle of civilization or are there better, more humane alternatives?

As they engage those questions they sift through their philosophical foundations, how those foundations inform contemporary intellectual thought, as well as how those foundations shape everyday public opinion and discourse. Against that large canvas, they insert storied ethnographic, historical, and archaeological examples that form counterweights to the dominant narrative that maps humanity’s arc from bands to tribes to chiefdoms to kingdoms and, finally, states.

What is at the heart of that master narrative? It is a linear social evolutionary model established by the work of such philosophical luminaries as Jean-Jacques Rousseau (1712–1778), Thomas Hobbes (1588–1679), Adam Smith (1723–1790), Herbert Spencer (1820–1903), and Karl Marx (1818–1883). This evolutionary model informs many recent broad-brush histories of humanity including Jared Diamond, Yuval Harari, and Steven Pinker. That evolutionary thought is also deeply embedded in the language we use to describe our social worlds: primitive / modern; simple / complex; first world / third world; developed / undeveloped; industrial / pre-industrial; egalitarian / hierarchical.

It is that final binary set that is foundational to the evolutionary consideration of human origins and the origins of inequality. Were our ancient and historical ancestors fundamentally egalitarian or were they always hierarchical? Graeber and Wengrow argue that framing the question in terms of origins sets philosophers and social scientists down a failed intellectual path, for they argue that early human societies tack back and forth between those two extremes, sometimes organizing and reorganizing based on seasonality or other sets of shifting dynamics. That is, our earliest political formations were dynamic and flexible rather than singular and fixed.

Though they do not use this example, a relevant one comes from the classic work by anthropologist Edmund Leach (1954) on the gumlau and gumsa systems of socio-political organization found among the mountain Kachin and valley Shan of then-Burma. Gumlau was comprised of a relatively egalitarian confederation of villages without much hereditary class stratification, most often associated with the Kachin. Gumsa was distinctly hierarchical, class-based, and associated with the Shan. As the Shan state fell in the 19th century, Shan-Kachin relations reversed, and the Kachin leaders reshaped themselves as Shan princes as they then commanded new forms of political and economic resources. Leach contended that these two systems oscillated back and forth depending on how external political-economic forces were affecting landlord-tenant relations that shift from one emphasizing kinship and reciprocity to one treating tenants as serfs to be exploited.

In Graeber and Wengrow’s counter-narrative to the dominant paradigm, the past emerges as a highly diverse series of socio-political experiments with little evidence of much hierarchy at least as a permanent form of organization, control, and subjugation. Indeed, the agricultural revolution of the Neolithic is more of crawl and a capitulation to diminished-foraging opportunities than it is a mad dash to grow cereal crops and build early states.

As they note, foragers mostly stayed foragers perhaps with some supplemental agriculture on the side when it was easy—flood-recession agriculture and the like. So it’s best to think of the shift to agriculture as a slow process on the ecological margins where foraging was less productive and predictable. It was a patchwork affair in places like the Middle East’s Fertile Crescent rather than a uniform process marching inevitably toward early authoritarian states with religious-political leaders, administrative bureaucracies, and subjugated citizens.

With that, we turn to the state (whatever that is). Graeber and Wengrow contend that there are three major dimensions to the state and its dominion over its subjects: sovereignty / violence, administration / knowledge, and competitive politics / charisma. Looking back into the archaeological record, they ponder how these elements uniquely crystallize into political forms that have some resemblance to a state.

The takeaway, whether we are exploring state-like forms in Mesoamerica (e.g., Teotihuacán, Ancient Maya, Aztec) or South America (e.g., Inca) or elsewhere, it’s clear that were very different from today’s prototype of the modern nation-state no matter how hard we try to ethnocentrically project it back into the past. (And, of course, modern nation-states are themselves highly diverse and comparatively recent.) Much like the exploration of the origins of inequality, the search for the Social Contract or Hobbesian origin of the state is a fool’s errand and another example of asking exactly the wrong question. (Or, alternatively, these questions are more of a reflection of current ideological preoccupations and blinders than any serious truth-seeking inquiry.)

Indeed, when they start pulling apart the development of these supposed early states, most of them have, at most, two of the three main elements they lay out as defining states. In fact, they contend that the only case that really holds up as an uncontested early state with all three elements is Pharaonic Egypt with its impressive armies, secular and religious knowledge, and deep cults of political personality in the form of kin-based dynasties.

Nevertheless, their point holds that complexity and scale does not automatically translate into hierarchies that inevitably lead to the state as the evolutionary paradigm would suggest. We could find numerous cases of complex hydraulic systems that require no state-level system of bureaucratic management—e.g., the rice terraces of Ifugao, Balinese water temples, or the massive system of irrigation canals operated by the Ancient Hohokam in the Arizona desert.

Bookending this volume is a discussion of indigenous critiques—especially from North America—of early European culture and society. This consideration serves various ends including upending the idea that those indigenous people were somehow simple and childlike as mythologized by unilinear evolutionary models of human social development that stem from the Enlightenment.

It also underscores the consciousness, sophistication, and agency inherent in indigenous political thought as it confronted the European “other.” Graeber and Wengrow highlight how indigenous political ideas and forms of organization made their way back to Europe and became influential. For example, elements of the American system of government was likely shaped, in part, through Benjamin Franklin’s embrace of the Iroquois notions of unity, federalism, and balance of power.

In the end, the authors contend that it is a profound error to assume that the authoritarian or the bureaucratic, hierarchical state is our only inevitable modern form of governance. After all, there have been in the archaeological and historical past numerous examples where dense populations, urban centers, and sophisticated technologies have not resulted in political organization requiring state-like, top-down, command-control systems of authority and management. When we do see the apparatus of the state emerge, it always infringes upon, or eradicates altogether, human freedoms.

This sweeping and novel synthesis exploring the arc of the human condition—its highly diverse forms of socio-political organizing, and the future that lays in store for us—may well prove to be the most important book of the decade, for it explodes deeply held myths about the inevitability of our social lives dominated by the state. It is at once a sophisticated analysis packaged in accessible prose that moves briskly in the unfolding tale of humanity’s many forms of being and becoming. In keeping with Graeber’s own ideas about the humanistic, productive potentials of political anarchism, it is not surprising that societies—even quite complex ones—can operate quite well without the state’s overlords dictating how we organize and govern ourselves.