The Dawn Country: A People of the Longhouse Novel (North America's Forgotten Past) 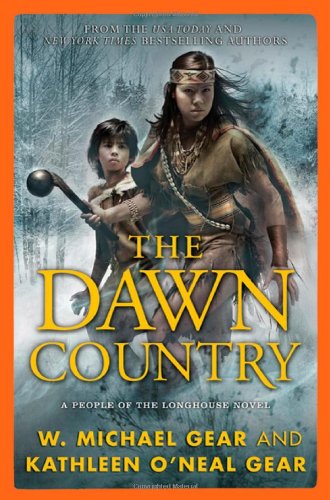 Once in a while authors don’t just master a genre, they take effective ownership of it. Think Louis L’Amour when it comes to westerns or John Le Carré with spy novels, maybe even Tom Clancy and techno-thrillers. Kathleen and Michael Gear’s works covering America’s Native American history go all of those one better. The Gears haven’t just created a seminal series, they have also brought the past to life in a vibrant, accessible way that stands out as one of the greatest achievements in modern American fiction. And their latest, The Dawn Country, emerges as a masterpiece of storytelling, an astonishing accomplishment in every respect.

“Sonon pulled his black cape more tightly around him and studied the frozen ground. The warriors’ feet had hewn a dark swath through the frost that glittered in the gaudy orange halo. His gaze followed their trail to the burning village.”

That burning village holds the product of a terrible massacre thanks to warring Iroquois Indian tribes circa 1430. Before Columbus, before the pilgrims, before any outside civilization ever reached an America that was hardly a utopian paradise by any standards. Indeed, among the terrible realities presented in The Dawn Country, is the exploitation of children who, once taken prisoner by a warring tribe, are sold or traded off.

In that respect, one of the things that make this and all the Gears’ work so stunning is the allegorical implications these historical tales hold for our own tortured modern sensibilities. Children being sold off as sex slaves is all over the news these days. And the way the Gears present the rationales and moral justifications for their battling tribes is eerily reminiscent of today’s imploding Arab world that’s going up in flames right before our hapless eyes.

Some of the characters faced with the terrible violence of The Dawn Country seem similarly hapless, though not the brave group of children led by young Wrass who are being held captive by Gannejero, an especially evil would-be witch intent in trading in their flesh. It’s here that the Gears’ latest tale becomes exceptionally personal and gut-wrenching: a kind of Native American Lord of the Flies where young boys and girls are forced to grow up much too fast in order to deal with the terrible realities into which they were born. Something else that feels oddly modern, if not prescient.

The unique stylistic approach has alternating chapters told from different viewpoints, which also appear in different fonts. In this, as in their having the courage and knowledge to tread in subjects the rest of us can’t or won’t, the Gears create confidently. They are true trailblazers, negotiating literary trails with the same skill and aplomb as their characters approach frozen ones.

Watching the brave Koracoo and Gonda race to save the captive children before it’s too late makes for the ultimate noble quest that defines both the simplicity and complexity of the era at the same time. That would be a tough dichotomy to handle in lesser hands. But Katherine and Michael Gears’ grasp is firm and unwavering. They are wordsmith magicians, conjuring up a world from long ago every bit as a real and relevant as our own.

Thanks to timeless books like The Dawn Country, the Gears will go down as the very best at what they do.