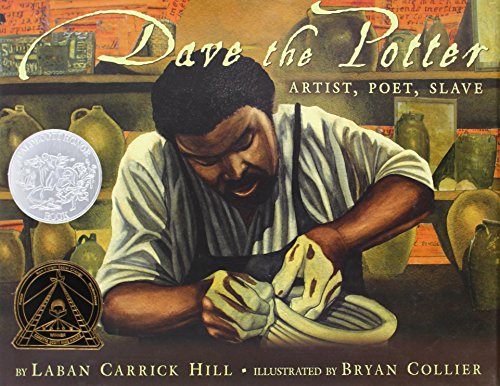 When you think about slavery, pottery is probably not the first thing that comes to mind. Yet slaves helped make the functional items needed on plantations.

Dave the Potter: Artist, Poet, Slave, by Laban Carrick Hill, is a poetic nonfiction picture book about an enslaved worker known only as Dave.

The book is incredible.

“To us,” says the narrator on the first page, “it is just dirt,/ the ground we walk on. . . . . But to Dave/ it was clay,/ the plain and basic stuff/ upon which he learned to/ form a life/ as a slave nearly/ two hundred years ago.”

Next, the narrator focuses on creative action. With direct and lyrical language, he describes the sixty pounds of clay, the rising of the shape, the swell of the curve, and the threat of collapse.

The size of the emerging pot is amazing.

“The jar grew so large/ Dave could no longer/ wrap his strong arms around it./ If he climbed into the jar/ and curled into a ball,/ he would have been embraced.”

Yet the truly unique part of Dave’s art appears at the end of the process. Before the clay is hardened, Dave uses a stick to inscribe a short poem: “I wonder where is all my relations/ Friendship to all—and every nation.” The illustration shows Dave at work, dating it as “Aug 16, 1859.”

The book concludes with an endnote that includes photographs of Dave’s pots, seven samples of his poetry, and fascinating information about Dave.

According to the author, some of Dave’s pots could hold as much as 40 gallons. Not only that, he lost a leg in the middle of his life. Another man, who had crippled arms, kicked the wheel for him.

The book has one, tiny shortcoming. Readers may be troubled by one omission: how Dave learned to read and write. In the endnote, Hill simply writes: “How Dave learned may never be known.” Reading this statement leads to the assumption that the history of Dave’s literacy is unknown. After all, Hill has included an extensive bibliography. And while one of the sources—the website of Leonard Todd, the author of Carolina Clay (Dave’s full biography)—speculates that apparently, there is more known about Dave’s background, there is no concrete evidence to support the claim that Dave’s master (the owner of a pottery factory) was deeply religious and may have put Dave on the road to literacy by allowing him access to the Bible.

But in defense of Hill, the focus of Dave the Potter is not the history of one man’s road to literacy, but the determination of the human spirit to leave a mark upon the world.