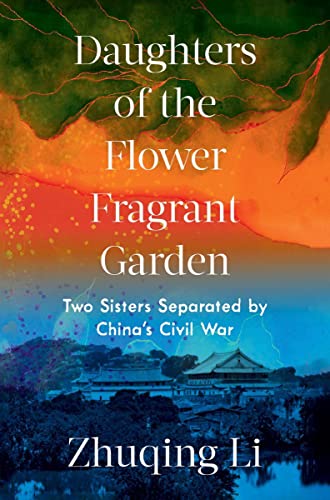 “Zhuqing Li’s Daughters of the Flower Fragrant Garden tells the heartrending, beautifully written, remarkable story of two sisters—Li’s aunts, inseparable as young girls—that circumstances forced to live separate lives for more than 30 years on opposite ends of the Taiwan Strait.”

The Chinese Civil War was an historic event of enduring global significance and repercussions, but sometimes the global view of an event obscures its effect on individual lives caught up in the geopolitical maelstrom. Brown University Professor Zhuqing Li’s Daughters of the Flower Fragrant Garden tells the heartrending, beautifully written, remarkable story of two sisters—Li’s aunts, inseparable as young girls—that circumstances forced to live separate lives for more than 30 years on opposite ends of the Taiwan Strait.

The book’s title is taken from the name of the sisters’ childhood home located near the city of Fuzhou. There, the Chen family, including sisters Jun and Hong (the latter is a pseudonym used by the author at her aunt’s request) first endured Japan’s invasion of China in the late 1930s—when the family went into internal exile—and later suffered adversities caused by the communists’ victory in China’s civil war in October 1949.

The Chen compound on the Flower Fragrant Garden was built by Li’s grandfather and housed the Chen’s large, extended family. It was there, Li writes, that the family shaped the values of Jun and Hong. Both sisters studied at a missionary school that taught a mix of Christian and Confucian values, along with history, geography, English, and the sciences. The sisters were very close.

The war against Japan, Li writes, “was like a big wave that lifted the entire family up and then smashed it to pieces on a distant shore.” The family moved to Nanping, where the sisters’ education continued. And when that war ended, the struggle for power between the Nationalists and the Communists literally tore the family apart.

By 1949, with the communists on the road to victory in the civil war, Jun had accepted a teaching position on Jinman Island. Hong, meanwhile, was studying to be a physician. After Jun arrived on Jinman, the Nationalist government of Chiang Kai-shek fled to Taiwan and converted Jinman into a defensive fortress to prevent a communist invasion of Taiwan. Communist forces bombarded Jinman and attacked the island, but Nationalist forces prevailed. (The author in 2008 visited the scene of a battle on Jinman where she observed bullet holes, abandoned tanks and pillboxes from the fighting in 1949.)

Back on the mainland, the communists imposed their repressive apparatus on the citizens, launching a campaign for “suppressing counterrevolutionaries.” It was, Li writes, “Chairman Mao’s first stabs at purge and ideological purification.” There would be several more in the future, and each time China was engulfed by turmoil and savagery on an unprecedented scale.

When the Korean War broke out, the U.S. 7th Fleet sailed to the Taiwan Strait, preventing a communist invasion of Taiwan and, in Li’s words, sealing “the separation of Taiwan from the Mainland, Jun from Hong.” The sisters would not see one another again for 30 years.

Living under a paranoid and suspicious communist regime forced Hong to make what Li calls a “tough, unsentimental” decision to cut all ties to Jun, who was writing articles on Taiwan critical of the communists. “Anyone with connections, even the most seemingly innocuous connections, to the former Nationalist government . . .” Li writes, “was suspected of being a ‘counterrevolutionary.’”

Jun married a Nationalist military officer and that, plus her writings in Taiwan journals, placed her sister Hong under suspicion. Hong by then was working at a hospital, but she was ordered by Party officials to undergo “weekly self-criticism sessions,” after which she had to write reports on her progress that aligned with Mao Zedong thought. Li notes that throughout this time and during later communist political convulsions, “Hong tried to stay in lockstep with the Party, and she never wavered.”

Li explains that Hong made a conscious decision for the well-being of her career and her family to “cast off her older sister” and toe the Party line. Hong became a respected physician who helped care for rural families, especially women. During the Great Leap Forward—the catastrophic state-induced famine that cost the lives of an estimated 30 million people in China between 1958 and 1962—Hong witnessed first-hand the consequences of famine, yet “chose, as always, to focus on what she saw as the positive side of the Party’s leadership and the inspiration she felt in serving the people.”

Hong’s loyalty to the Party, however, did not save her from the turmoil of the Cultural Revolution that convulsed the mainland between 1966 and 1976. Young Red Guards inspired by Mao denounced her, tore up her medical license, spat on her as she stood silently at a hospital gate, and subjected her to “re-education.” She was ordered into rural villages to work with the peasants during the day and study Mao Zedong thought in the evenings. Yet even here under such dreadful conditions, Hong managed to help medically treat villagers.

Meanwhile, Jun and her husband formed an import-export company on Taiwan, not knowing what Hong was undergoing on the mainland. Yet her extended family in China—her mother, father, sister, brother, grandparents, cousins—was never far from her thoughts. Jun longed to return to the Flower Fragrant Garden when circumstances permitted it.

Hong was eventually rehabilitated by the Party. Her medical license was restored. She became involved in China’s efforts to impose population control, and she approached that task with apprehension because she was aware that women were being forced to have abortions and undergo sterilizations. Li writes that “Hong looked away at these practices” and remained loyal to the Party. Eventually, she became a formal Party member.

Jun suffered health problems and became a devout Christian. Geopolitical developments made a reunion of the sisters possible. Nixon’s opening to China started an entente between the U.S. and China that grew stronger after Mao’s death in 1976. Jun longed to return to China to reattach to her old home and family. She relocated to the United States (living in Maryland) and traveled to China to see her sister, mother, and other family members in 1979.

Li describes the emotional reunion of the sisters, but notes that the 30-year separation with sisters living very different lives under very different circumstances meant that there would be no “restoration” of her place in the family. “The world that Jun had fought all her life to return to,” Li explains, “had slipped into a new reality.” She never got to see the Flower Fragrant Garden, which the family had lost many years before.