Darwin Comes to Town: How the Urban Jungle Drives Evolution 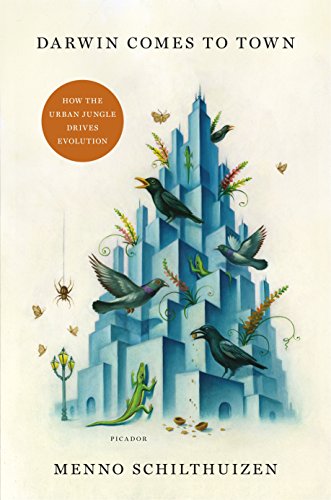 “an enthralling account that stands out from the pack of environmental literature.”

These strains could only mix genes if they changed trains at Oxford Circus station, Schilthuizen notes, which suggests Culex molestus evolved very recently, perhaps around the same time the Underground was built. This whimsical approach—and the revolutionary science that undergirds it—suffuses Darwin Comes to Town, a dead-serious argument that floats on currents of enchanting detail and wit, reminiscent of Ed Yong’s I Contain Multitudes and a win-win for readers.

Far from viewing large cities—London, New York, Tokyo, Singapore—as the enemies of nature, Schilthuizen, a Dutch biologist, advances the idea that many species are adapting to the contingencies of urban life, creating a fresh wealth of biodiversity.

In some contexts, evolution unfolds at a glacier’s pace; but in others it can move at lightning speed. Nowhere is this more evident than in cities, where even blackbirds answer the questions posed by the finches Darwin discovered in the Galápagos Islands.

Schilthuizen fleshes out his thesis with vivid examples. In Britain: the peppered moth, who, during the advent of industrialization in Manchester, swapped its gray mottled wings for black so as to blend in with the soot that blanketed streets and foliage (and to avoid the keen gaze of hawks and other predators).

In Paris: groups of parrots that differ genetically, depending on their neighborhoods.

In New York City: populations of common white-footed mice, cut off from each other in parks such as Manhattan’s Central and Brooklyn’s Prospect, and that reveal genetic adaptations to their environments, especially a toleration for fast-food scraps and pollution.

In Bridgeport, Connecticut: a mummichong (Fundulus heteroclitus), a finger-sized fish who thrives in the PCB-clouded harbor, water so toxic it would kill most other marine life.

And in Albi, a city that straddles the Tarn river in southern France: pigeons flock to the Pont Vieux, bathing and preening along the shoreline, unwitting victims to Silurus Glanis, the continent’s largest freshwater fish. (Some specimens run over six feet long.) These catfish are not native to western Europe and were only introduced to the Tarn by anglers in 1983.

In 35 years they’ve evolved an unusual predatory behavior: they will beach themselves to nab unsuspecting pigeons, drag them underwater, and swallow them whole. As Schilthuizen notes, “Eating birds. Beaching themselves to catch them, for crying out loud! . . . Humans brought rock pigeons and catfish into their cities, introduced them to each other, and thus created an ecological opportunity that never existed before.”

We may shudder at this miniature version of Jaws, but Schilthuizen sees urban evolution as a glass half full: amid our skyscrapers and cracked sidewalks we can observe nature’s resiliency as it responds to the brutal domination of a single “cornerstone” species, Homo sapiens sapiens.

Each day we pillage habitats of myriad animals and plants—think of all the miles of Brazilian rain forest maimed each year—and yet nature somehow bounces back with plan B, on our own turf. Darwin Comes to Town brims with absorbing, evocative stories, but it’s also cutting-edge science; Schilthuizen, along with only a handful of biologists around the world, is plumbing the genomic mutations and natural selection erupting around us.

Some research indicates that the ecologies of cities are more similar to each other than to those in nearby rural patches: “What all this means is that the ecosystems of the cities around the world are growing more and more alike; their communities of plants and animals, fungi, single-celled organisms, and viruses are inching toward a single globalized, multi-purpose urban biodiversity . . . In the unspoiled forests, deserts, swamps, and dunes far from human interference, evolutionary change is driven by age-old natural forces . . . in cities . . . it is the other way around.”

Darwin Comes to Town, then, is surprisingly optimistic as it dives deep into the data of HIREC, or Human-Induced Rapid Evolutionary Change. As our world grows increasingly urbanized, as we design “green” buildings among our congested downtowns, Schilthuizen’s book makes for essential reading. But don’t expect a dry textbook: he’s written an enthralling account that stands out from the pack of environmental literature.