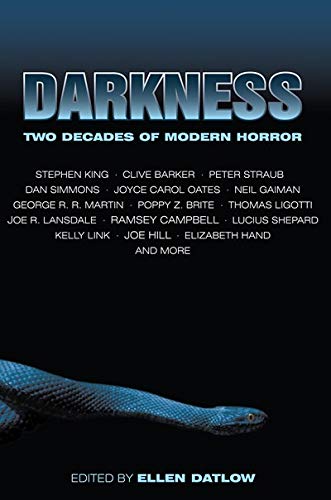 What is terrifying? What makes you feel the hairs on the back of your neck stand up? What makes you repeatedly look over your shoulder? Good horror fiction should do these things, but each reader has her own personal criteria for what is frightening. While some anthologies may claim to offer the best of horror, Darkness only claims to present those stories that editor Ellen Datlow found lingering in her mind long after she published them.

In all there are 25 stories representing the work of 6 female and 19 male authors, all of them well known in horror fiction and sometimes well known in science fiction, fantasy, and other genres. They are presented in chronological fashion starting in 1984 and ending in 2005. The foreword from Stefan Dziemianowicz, horror author and editor, suggests that this collection might tackle the stable and new trends in horror including splatterpunk, dark fantasy, zombies, serial killers, and vampires. Surprisingly, the stories in this collection do not fit neatly into these categories. Vampires are not the true subjects of any of the stories here.

Instead we have a wide range of subjects and forms from these 25 authors, enough variety to please almost any horror fan but also to disappoint almost any horror fan. This is not a “best of” collection and some of the stories may not linger in your memory once you venture into the next shadowy corner of the world revealed in the next story.

Clive Barker, credited with creating what is called splatterpunk is the very first author we meet. If you are unfamiliar with his writing but have seen his films frankly there isn’t much difference in this story, “Jacqueline Ess: Her Will and Testament,” which this reviewer could easily picture as she read. Of a similar sexual and violent nature is the poem, “Eaten (Scenes from a Moving Picture)” from Neil Gaiman and it, too, could be easily adapted to the screen as the title suggests.

Zombies are featured in two excellent and unique ways from Lucius Shepard’s “A Little Night Music” and Poppy Z. Brite’s “Calcutta, Lord of Nerves.” Both make you want to keep turning the pages as you feel the hair on the back of your neck stand up from the idea that zombies might be far more than merely mindless brain eaters.

Sometimes the horrific comes in small doses, poisoning our minds with its mundanity in subtle ways. “Dancing Chickens” by Edward Bryant does this with a slight dose of science fiction. Insight into the fears of bar patrons is the subject of Michael Marshall Smith’s “Rain Falls.” Kathe Koja’s “Teratisms” tackles family duty in a truly terrifying fashion with an ending both shocking and reassuring.

Serial killers may be interesting because the most prolific of them look just like the guy next door. This is certainly the case in “The Phone Woman” where Joe R. Landsdales takes us into those moments when a normal man becomes a monster. Vampires do show up as minor characters in the other serial killer study from Pat Cadigan whose viewpoint narrator of “The Power and the Passion” confirms our fears about secret missions being run by powerful organizations world-wide.

Meanwhile government “good guys” are the real monsters in David J. Schow’s “Refrigerator Heaven” where insanity is a method of survival. Less satisfying is the confusing mind of another insane narrator from Steve Rasnic Tem’s “Heat” which leaves us hanging.

Explanations are not always necessary for good horror, and this is most true when the subject is a mysterious, terrifying event neither the reader nor the characters can escape. Two authors, Thom Ligotti in “The Greater Festival of Masks” and Joe Hill in “My Father’s Mask” do a decent job of drawing us into the viewpoint character’s fears and actions. But “Stitch” by Terry Dowling not only offers us mysterious events and horrific memories but a satisfying ending as well.

Horror as a horrific twist of real life builds slowly in four authors’ work. Stephen King’s “Chattery Teeth” is classic for him and should please his fans. Kelly Link’s “The Specialist’s Hat” takes bratty kids and ghosts to a different level. Ramsey Campbell’s “No Strings” shows us an investigation gone horribly wrong. Elizabeth Hand had a complex story that combines family secrets and the fame monsters into one narrative whose ending felt unnecessarily tacked on.

Horror in real life settings doesn’t need to build up slowly for a good story. Both George R. R. Martin’s “The Pear-Shaped Man” and Joyce Carol Oates’ story jump right into events and memories that will make you shiver with their creepiness. Sadly, two other stories in this collection need to speed up their action because both Peter Straub’s “The Juniper Tree” and Gene Wolfe’s “The Tree Is My Hat” were just too detailed and slow paced to really terrify this reviewer.

Finally three stories simply confused this reviewer because they didn’t make her worry, cause her hair to stand up, or even linger very long in her memory. Sadly this included Dan Simmons’ “Two Minutes Forty-Five Seconds,” Dennis Etchison’s “The Dog Park,” and Glen Hirshberg’s “Dancing Men.”

Quality horror must give us the creeps on at least one level. Great horror can affect you at the physical, emotional, and intellectual level for a very long time. The best of the genre will continue to do that—no matter how many times you read it. This collection’s range of subjects and forms of storytelling gives us enough quality to be added to your summer reading list—as long as you make sure you are in a safe place before you open it up.