Darkness to Light: A Memoir 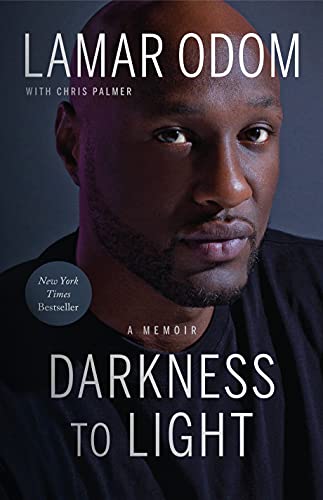 “What you do in the darkness comes out in the light.”

A little boy—an only child growing up in Queens, NY, with a hard-working mother and an abusive, absentee, drug-addicted father—can become haunted by demons, especially when your mom dies of cancer when you are only 12. Who knows what might have happened to Lamar Odom had he not had his grandmother, Mildred, by his side?

Lamar Joseph Odom was born in 1979 and while he didn’t have much of an academic inclination, the one thing he always excelled at—from the time he was a little boy—was basketball. He ran to the courts at Lincoln Park after his mother’s death, and played every day for two years.

At Christ the King Regional High School in Queens he met the future mother of his children, Liza Morales, when he was only 14. “I loved the ladies and they loved me, which is probably why Liza kept her distance.”

By the time Odom was 16, he became a star of the courts. College coaches attended his games. Sneaker brand wars ensued between Nike and Adidas though Odom wore Air Jordan 8s. All heady stuff for a boy not yet even of college age.

In 1995, Odom broke Kareem Abdul Jabbar’s record for the Catholic High School Athletic Association. Yet he continued to suffer from unaddressed depression.

For his senior year of high school, he was shuffled off to an “unheated, awful” boarding school in Troy, NY. He began to smoke weed and confessed to never having ever paid for it. In his senior year, Liza gave birth to his daughter, Destiny, in 1998 when Odom was just 18.

With top college coaches vying for Odom, he chose UNLV, but they rescinded his scholarship because someone else took his SATs; so, he headed to Kingston, RI, for university. Unable to retain a 2.4 GPA that was required for the scholarship, Odom sank further into depression and was treated with Prozac.

Though he was unable to finish college, he went pro in 1999 for the NBA, with the LA Clippers. He settled on the west coast at barely 19, with Liza and baby Destiny.

Odom was offered a $63 million contract with the Miami Heat.

He was eventually traded to the LA Lakers, with a $7.4 million bonus and was named to the 2004 U.S. Men’s Olympic basketball team. The catch was, however, he had to be drug tested. So he used someone else’s urine. He barely continued to get by as drug use escalated when he took to cocaine.

“I’ve been looking for my mother ever since she died. I looked for her in the women I took home . . . I am a sex addict.” At one point, Odom confessed to having had sex with over 2,000 women—mostly unprotected sex; he paid for many abortions over the years.

Liza and Odom’s third child, Jayden, was born in 2005 but he died at six months from SIDS. Liza and Odom drifted further apart.

Odom continued to find ways to avoid drug tests, to pass them, or to have others take them for him. While living in LA, he had a relationship with Taraji P. Henson.

In 2009 he met Khloé Kardashian and they married almost immediately. “Nothing could prepare me for the spotlight that came with being a member of the Kardashian family.” This pressure led to even further drug use, with a bad trip on coke and ecstasy.

The LA Lakers traded Odom to the Dallas Mavericks, owned by Mark Cuban—but Odom could not get along with him, so he was moved to the LA Clippers.

A quote from his beloved grandmother entered his thoughts during this low point in his life when he was facing divorce from Kardashian. “What you do in the darkness comes out in the light.”

Depression drove Odom to near death in 2015 when he suffered six strokes and 12 seizures at the Love Ranch, a brothel outside of Las Vegas. While his divorce from Kardashian was pending, she oversaw a media circus until he was well enough to be on his own.

His family and children arranged an intervention, and he was shortly thereafter off to a rehab facility in San Diego, leaving him with hope.

All the money in the world means nothing if you cannot stop chasing those demons. Darkness to Light by Lamar Odom with Chris Palmer is a real and gritty memoir of pain, truths, and lessons learned as well as of the politics, protocol, and pressures of pro basketball.