Into the Darkest Corner: A Novel 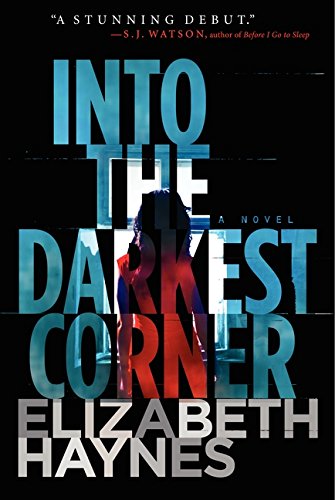 “. . . a tour de force début novel that is both creepily disturbing and beautifully rendered.”

The brutal, in-your-face beginning of Into the Darkest Corner by Elizabeth Haynes takes no prisoners, offering little shelter for the squeamish:

As far as days to die were concerned, the longest day of the year was as good a day as any.

Naomi Bennett lay with her eyes open at the bottom of a ditch while the blood that had kept her alive for all of her twenty-four years pulsed away into the grit and rubble beneath her.

As she drifted in and out of awareness, she contemplated the irony of it all: how she was going to die now—having survived so much, and thinking that freedom was so close—at the hands of the only man who had ever really loved her and shown her kindness. He stood at the edge of the ditch above her, his face in shadow as the sun shone through the bright green leaves and cast dappled light over him, his hair halo bright. Waiting.

The blood filled her lungs and she coughed, blowing scarlet bubbles that foamed over her chin.

He stood motionless, one hand on the shovel, watching the blood flow out of her and marvelling at its glorious colour, a liquid jewel, and at how even at the moment of death she was still the most beautiful woman he’d ever seen.

Once the flow slowed to a mere trickle he turned away, casting a glance across the derelict no-man’s-land between the back of the industrial estate and the beginnings of farmland. Nobody came here, not even dog-walkers; the ground was rough and scarred with manufacturing rubbish accumulated over decades, weeds growing through empty cable reels, brown fluid leaking out of rusted oil drums, and at the edge, beneath a long row of lime trees, a six-foot ditch that brought dirty water when it rained, draining a mile away into the river.

The wind had started to pick up and he looked up through the canopy of leaves to the clouds chasing each other across the sky.

He scrambled carefully down the rough slope into the bottom of the ditch, using the shovel for support, and then without hesitation drove it into her skull, bouncing roughly off the first time, then with a dull crack breaking the bone and splintering it into her flesh. Again and again, gasping with the effort, smashing her face away, breaking teeth, bone and flesh into one ghastly mixture.

After that, she wasn’t his Naomi any more.

He used the knife again to slice away at each of her fingers in turn, her palms, until nothing identifiable was left. Finally, he used the bloody shovel to cover her over with the rubble, sand and rubbish that had collected in the ditch. It wasn’t a very good job. The blood was everywhere.

But as he finished—wiping away the tears that he’d been shedding from the moment she’d said his name in surprise, just as he’d sliced her throat—the first spots of rain fell from the darkening sky.

Catherine Bailey, the protagonist of Into The Darkest Corner, has been enjoying the single life long enough to know a catch when she sees one. Gorgeous, charismatic, and spontaneous, Lee seems almost too perfect to be true. And her friends clearly agree, as each in turn falls under his spell.

But what begins as flattering attentiveness and passionate sex turns into raging jealousy, and Catherine soon learns there is a darker side to Lee. His increasingly erratic, controlling behavior becomes frightening, but no one believes her when she shares her fears.

Increasingly isolated and driven into the darkest corner of her world, a desperate Catherine plans a meticulous escape.

Four years later, Lee is behind bars and Catherine—now Cathy—is a deeply scarred and changed woman. Burdened with OCD (Obsessive Compulsive Disorder), she compulsively checks the locks, windows, and doors in her apartment, trusting no one, and fearing everything.

When an attractive upstairs neighbor, Stuart, comes into her life, Cathy dares to hope that happiness and love may still be possible. Stuart, who also happens to be a psychiatrist, soon points her in the direction of therapy, and she begins to make steps down the road to recovery.

But all that is about to change, once again, when she receives a phone call from the police informing her of Lee’s impending release after having served his three years in prison.

Soon after, Cathy thinks she catches a glimpse of the former best friend who testified against her in the trial; she begins to return home to find objects subtly rearranged in her apartment, one of Lee’s old tricks.

Convinced she is back in her former lover’s sights, Cathy prepares to wrestle with the demons of her past for the last time. . . .

She has given us a tour de force début novel that is both creepily disturbing and beautifully rendered.