Dark Witch: Book One of The Cousins O'Dwyer Trilogy 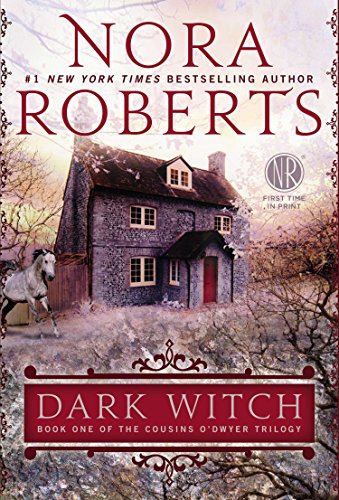 In the winter of 1263 a cottage in the woods has survived hundreds of years, but it’s home and needs to be. The Dark Witch, Sorcha, lives there with her three children, all possessing their mother's inherent magick.

Cabhan, a black sorcerer, wants to unite their powers—but mostly wants hers to help him rule the world. Cabhan screams with anger, more so with rage as Sorcha hurls her magic at his evil heart. Refusing to give up, he attacks her daughter Teagan in her dreams, but her stallion Alastar protects her, even as Eamon’s hawk, Roibeard protects him.

The demon tries to molest the oldest girl, Brannaugh, but her innate powers burn him severely, as her huge dog Kathel comes to her rescue. It's in their dreams that the sorcerer works his magick.

Sorcha, suffering an unknown ailment, weaves her powerful spells to keep her beloved children safe—creating a circle of safety from all harm and protecting them with a magic amulet for each child. She casts strong magic, making the three of them one power, perhaps strong enough to destroy the evil. Will it be enough to hold off the determined Cabhan? The Dark Witch takes no chances and hurries to teach her gifted children how to use their powers as her own steadily fade away.

It's the year 2013 when Iona Sheehan arrives at County Mayo, Ireland, in cold and freezing rain, yet happy, for here lies her ancestry, the land of her forebears. Stories bred into her by her grandmother manifest as she stands in an actual castle over 750 years old, waiting to release its secrets.

Her grandmother, Nan, has told her tales, given her a map to start her on her way. It leads her to a lovely cottage where stands a sign on aged wood—The Dark Witch. The cottage door opens, releasing smells of herbs on shelves with pestles; and perhaps a cauldron.

Iona introduces herself to her cousin, Branna O’ Dwyer, and meets the massive dog who’d barked at her on her way through foggy woods, a dog named Kathel. Iona tells Branna her Nan has spoken of her and her brother Connor as she chatters nonstop with the dark lovely Branna adding a word or two when she can. She sparks quick interest when Iona speaks of her strange dream: a nightmare in which a sorcerer named Cabhan wants to kill her.

Branna asks if she possesses any magick powers so Iona shows off a few things her Nan had taught her. It soon becomes evident that the cousins are the Dark Witch, three in one, chosen through generations to confront and destroy the evil sorcerer. Iona's bloodline carriesTeagan’s power and her love of horses.

Branna tells her of a job working in stables and insists that she live with her and Connor who carries Eamon’s blood and love of hawks. Branna is naturally descended from Brannagh and loves dogs—the three are together, joined as one in power to avenge their ancestral mother—the prophecy has begun.

Iona meets Boyle McGrath who runs the stable, and his partner Finbar Burke, whose bloodlines lead back to the sorcerer. Fin brings a new stallion to the stables, named Alastar, Teagan’s horse in another time. Iona is attracted to Boyle, rough and temperamental he may be, his eyes boring into hers suggesting he feels the same.

Ms. Roberts’s character’s Irish dialect is subtle in this book but no less charming. Readers who know the Boonsboro Trilogy set in her own town will be thrilled to read another story in a series set in her favorite place: Ireland. There is some cursing in the book, not related to witchcraft, which adds realism but detracts from the beauty of the story.