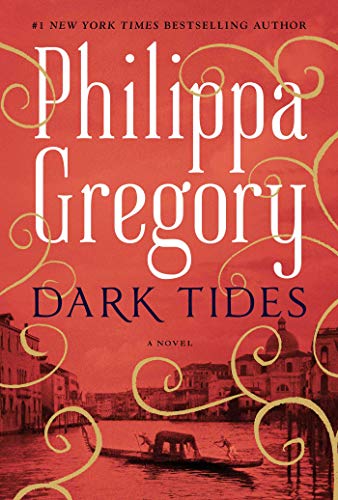 “an entrancing family story and a surprising adventure. Gregory’s female characters are, as always, clearly human, deeply thoughtful, and driven by their own desires and agency. Their stories are terrifying and funny, utterly readable.”

Dark Tides is the second book in Philippa Gregory’s Fairmile Series, but like much of her other work, it’s entirely comprehensible on its own terms. The novel begins in June of 1670, a few years into the Restoration, and a little more than 20 years after Tidelands ends. Two visitors arrive separately at a small warehouse on the Thames, just outside London proper. One is Sir James Avery, former lover of proprietress Alinor Reekie. The other is a mysterious woman who claims to the widow of Alinor’s son Rob, who recently drowned in the Venice lagoon.

Avery wants his son. He was Alinor’s lover, and knows she was pregnant when he abandoned her to witch-ducking. Alinor’s daughter Alys wants none of him. He’s an outsider who has brought her family nothing but trouble. A single mother to now-adult twins, Alys runs the daily business of the family warehouse and wharf, while her mother Alinor is disabled and works mostly as an herbalist.

Rob’s widow, Livia, Nobildonna di Ricci, arrives with her son, in deep mourning, and with apparently no money or assets. She’s disappointed to discover that the family aren’t wealthy traders but only marginal figures at the edge of an expanding global British empire. Her tragic poses alternate with ecstatic joys and enthusiasms, and there’s little doubt that her tale of woe conceals some lurid history.

Philippa Gregory is a master of historical fiction, and Dark Tides is a lovely example of her work. She’s best known for her novels of the Tudor courts and of royal women, but this narrative of working-class people almost a century later is as rich and emotionally resonant as her accounts of the wives of Henry VIII. In fact, by abandoning well-known characters, Gregory allows herself more room to explore the complexities of women’s lives within societies that restrict their agency and humanity.

Dark Tides follows three generations of English women at the beginning of the Early Modern period. The Restoration is in full swing, but other than James Avery, these characters don’t move in glittering circles. None of the three expects to rise socially, either through marriage or her own labor.

Sarah, the youngest of these women, at least has contact with the elite when she carefully trims their hats as an apprentice milliner, and she’s understandably a little discontent. She loves her work, but sees its limits: “Thruppence a day for a junior, tenpence a day for a senior. . . . The only hope for any of us is that a man sees us and proposes marriage and takes us away from here. There’s no way to make a living out of feathers and glass and straw unless you open your own shop.” Sarah is certain that she’d “rather be in a real business and not women’s trade. For some reason they’re always paid cheap. But I won’t get stuck here, hoping for a man to rescue me.”

Livia di Ricci, by contrast, is very much on the make, and if no man is coming to rescue her, she’ll rearrange his path to ensure he arrives on schedule. Livia’s plan to import her inheritance from a previous marriage, an enormous collection of Italian marbles, provides insight into the Restoration court’s fascination with ancient Rome, and into the complexities of pan-European trade.

Dark Tides interweaves multiple points of view, most of which combine to form a single tapestry of London. The loose thread follows Alinor’s brother Ned, who has fled England for the New World, where he seeks to live without masters, guided by his own conscience.

However, Ned is, in spite of himself, entangled in the politics of his new country, and caught between the outraged and increasingly marginalized indigenous population and the colonial authorities. This section is generally well-done, and it ties back to Alinor’s family through the shipments of plants and odd objects that Ned sends her, but its events don’t bear on the larger plot.

Ned’s inclusion seems largely a result of his presence in Tidelands. Here, Dark Tides’ status as the second book in a series may be its weakness. It’s a story strong enough to stand on its own, but Gregory consistently seeks to resolve story elements that belong to the earlier volume, and that a casual reader might not recognize.

That weakness aside, Dark Tides is an entrancing family story and a surprising adventure. Gregory’s female characters are, as always, clearly human, deeply thoughtful, and driven by their own desires and agency. Their stories are terrifying and funny, utterly readable.