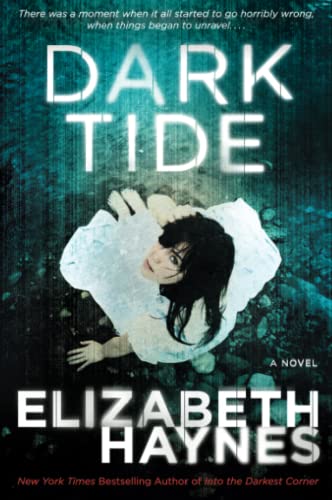 “Thrillers don’t get much better.”

Elizabeth Haynes’ debut novel, Into The Darkest Corner, was a powerful psychological novel of obsession and its consequences. It quickly became a critically acclaimed bestseller on the New York Times bestseller list and was voted Amazon U.K.’s Best Book of 2011.

Her new novel, Dark Tide, takes us on an entirely different journey of terror, this time semi-nautical. Told in the first person of Genevieve, Dark Tide is about a young woman who has saved all her hard-earned money as a London salesperson by day and exotic pole dancer by night to buy her dream: a houseboat.

From the very first moment Genevieve sets eyes on the boat in Kent, she knows it was the one she has always wanted. Despite its odd and rather ominous sounding name, Revenge of the Tide, she decides to keep the boat’s title. The Revenge has character after all, and living in a marina aboard her floating sanctuary has made her feel a bit safer, a little less lonely—almost as if the boat were looking after her, hiding her away from preying eyes.

But her dreams are quickly shattered. The night of her boat warming party a body washes up, and to Genevieve’s horror, she recognizes the victim as a close friend from nights dancing onstage as at a private members’ club, the Barclay. She isn’t about to tell the police, though; next to no one knew what she did every Friday and Saturday night to save money for her escape, and she sees no reason to reveal her past in case it infringes on her future.

Anyway, the death can’t have anything to do with her. Or can it?

Soon the lull of waves against the Revenge feels anything but soothing as Genevieve begins to receive mysterious calls and can’t reach the one person who links the present danger with her history at the club.

And then there’s the mysterious parcel on her boat she’s meant to be safeguarding for friend, Dylan, which seems to be putting her in jeopardy. She has the package stashed in a false-bottom box marked Kitchen Utensils. He gave her the package, paying her to hide it. He also gave her a mobile phone with the instructions never to contact him, that he would be first to call telling her what to do next; however, she’s quickly losing patience and is beginning to feel uneasy about what the package may contain.

As Genevieve begins to fear for her safety, she recalls the moment when it all started to go horribly wrong: the night she recognized her sleazy daytime boss in the crowd of customers at the Barclay. But will remembering now save her for what fate might have in store? Or did she remember just a little bit too late? Dark Tide is an ingeniously plotted tale of murder and intrigue as we witness the unfolding events through the eyes and fear of Genevieve, a tough young woman now seemingly out of her depth despite her immersion in the seedier side of life. Ms. Haynes has once again come up trumps and will delight her growing legions of fans.

Thrillers don’t get much better.