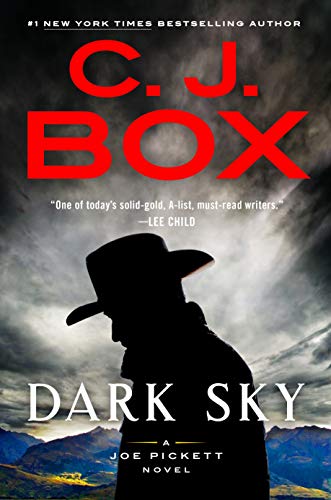 “By all means, don’t hesitate—grab Dark Sky and don’t put it down until it’s done.”

Wyoming game warden Joe Pickett finds himself in a bit of a bind when the governor orders him to serve as a guide for high tech billionaire wunderkind Steve Price, who’s coming to the state from Silicon Valley to experience first-hand the thrill of big-game elk hunting.

Joe’s not a guide, and it irks him that his obligations as a public servant require him to knuckle under and play along, particularly when a large-scale investment in Wyoming might be at stake, not to mention his own job.

Worse, their guest, known to his fans online as Steve-2 (Steve Jobs was Steve-1), is a self-centered prima donna with a small but annoying entourage Joe must also take under his wing.

But when trouble stalks them into the mountains and people begin to die, Steve-2 must face the reality that Joe Pickett is his only hope of getting back to civilization alive.

Dark Sky is the 21st Joe Pickett novel by C. J. Box, a native of Casper, Wyoming. The series has had a remarkable run, beginning with Open Season in 2001, which won the Anthony, Macavity, Gumshoe, and Barry awards as best first novel.

It’s Joe Pickett, however, who rides point in Box’s imaginative world. A family man whose wife, Marybeth, runs the local library, Joe’s the kind of square-jawed, calm-and-collected type of hero we love, a man who deals head-on with whatever trouble comes his way while at the same time trying to respect the parameters of his governmental responsibilities.

The subplot in this story once again features Joe’s best friend, Nate Romanowski. An iconoclast if there ever was one, Nate’s an accomplished master falconer who goes on the warpath when a poacher encroaches on his territory and begins capturing and transporting birds without regard for their welfare or the protocols involved in the business.

Complicating the situation is the fact that Joe’s daughter Sheridan is apprenticing with Nate, and his campaign to hunt down the poacher and lay some serious hurt on him is drawing Sheridan into the conflict. Good job, we figure, that Joe doesn’t know what’s going on.

Box is an accomplished storyteller, and Dark Sky is an effortless read. His use of setting, in this case the fictional Twelve Sleep Valley and its attendant mountains, is very effective.

As we’ve sees in the novels of Craig Johnson, also set in Wyoming, the landscape almost functions for Box as another character, at odds with Joe and his efforts to keep Steve-2 vertical and breathing. He must contend with snow, the deep cold, a constant threat of bears, and, unexpectedly, wolverines. There’s a remarkably strong sense of place here that centers the story and anchors us firmly in the action.

The similarities to Craig Johnson don’t end with the Wyoming landscape. Joe Pickett is cut from the same cloth as Walt Longmire, possessed of a stoic disregard for physical hardship and a dogged sense of duty that’s old-fashioned and quite admirable. Walt’s seen his share of gunfire, and here in Dark Sky Joe’s still recovering from wounds he received in the previous story.

As his daughter April has said, “You need to quit getting shot.” Unsurprisingly, this adventure isn’t moving him any closer to meeting that objective.

If you’re a reader who’s new to C. J. Box and you think you might be interested in a crime novel with a western setting and strong characters, by all means, don’t hesitate—grab Dark Sky and don’t put it down until it’s done.

And the best part? You can go back to the beginning and read 20 more just like it, with future installments, no doubt, just over the horizon.