Dark, Salt, Clear: The Life of a Fishing Town 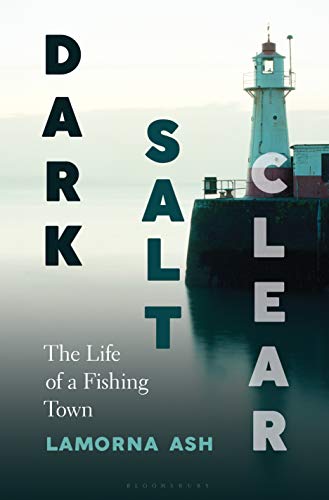 “Ash’s gift for observation and love of people make this first book memorable.”

In writing a book about a particular area, it helps to be named after a town there. Lamorna Ash revisits Cornwall, the wild area in the southwest of England, which is her mother’s ancestral home, in this accomplished and vividly written first book.

From the moment she leaves her London apartment to come to the picturesque fishing village of Newlyn, near Lamorna and Lands’ End in Cornwall, Lamorna is taken in both by her college-age contemporaries and the fishermen she joins for memorable weeks on the waters of the English Channel. One can see why: she unites keen interest in the place and its people with intrinsic kindness and open-hearted trust in others.

Ash’s gifts of observation illuminate many aspects of the community, from the way people interact in the pub to the geology of the area. She describes life on board a fishing boat with attention both to its ennui and its moments of surprise and strangeness. The haul of fish, which happens with great swiftness and suddenness as the “cod end” of the catch tumbles on board, brings out her lyrical gifts as she describes the iridescence of the fish scales.

The sight of the unbounded sky and sea in the morning inspires her: “It is all out there—not just a patch of sky framed by the interstices of skyscrapers; this is what the whole sky looks like, boundless in all directions. The sight still surprises me every time as if during the night my mind has unwrapped the sea’s clasp from my memory. Sometimes I wake to find us in a flat, cool desert; other days amongst yawning black waves like caves; others still to arctic scenes, the entirety of the sea white, as if overexposed, and the sky revealing further snowcaps.”

Like Melville in Moby-Dick, she teases out symbolic meaning from the brute facts of the fishery, finding in the depths of the sea clues to the meaning of human life. While gutting fish, she reflects on the mysteries of time and space: “As I gut, I slide between times: my own past, present, future, those of the men around me and of the fish themselves—all of us existing in this precarious world above the water, only a thin metal hull dividing us from the chasm underneath.”

For a young person, Ash has an uncommon appreciation for the elderly, as she learns much of the town’s history from one of its oldest inhabitants. Her experiences at sea give her insight into mortality. Alluding to a poem by Marianne Moore, “A Graveyard,” Ash notes that “If a body brought up from the water breathes or gasps, it is neither with volition nor consciousness, . . . but that does not stop man from believing there is some mystery, some regenerative power of the seas that might bring lost things back to life for us.”

The only flaw, though slight, is in the structure of the book. The chapters are linked by the common subject of the Cornwall town and its fishermen, but as a whole the book lacks narrative tension. Each individual chapter does have a strong narrative line, however. Indeed, many chapters could have been expanded, especially her alternately humorous and sublime description of the week she spent on one fishing boat, the Filadelfia.

Ash’s gift for observation and love of people make this first book memorable. Readers can look forward to more from this already successful writer (she is only in her twenties). Whether she ventures next into science writing, fiction, or memoir (it  would be interesting to learn more about her family, whom she mentions only briefly in this book), in the further works of Lamorna Ash readers can anticipate being initiated into a humane and richly realized world, as they are in Dark, Salt, Clear.