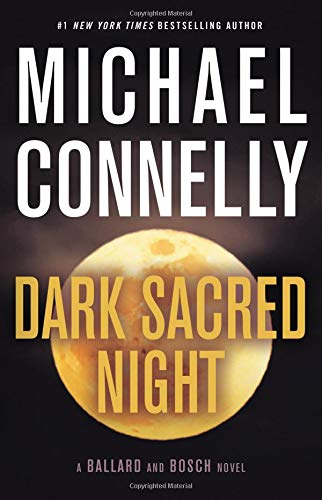 A new Michael Connelly crime novel is always a distinct pleasure to read.

Dark Sacred Night, Connelly’s 32nd offering, opens with Detective Renée Ballard once again working the Late Show, the midnight shift in Hollywood Division of the Los Angeles Police Department. After clearing a death investigation scene she returns to the station to find someone she doesn’t know searching through a filing cabinet. Hand on the grip of her Glock, she confronts him.

This stranger with gray hair and a mustache is, of course, Harry Bosch, and their relationship is off to a chippy start. When Ballard figures out that Bosch is following up on an old cold case involving the brutal murder of a 15-year-old girl whose body was left in a dumpster, she insists on being involved.

Meanwhile, Bosch is also working a cold case through his position as a reserve officer of the San Fernando Police Department. This one concerns the murder of a veteran gang member with “a Godfather-like presence” in the community who was gunned down in the street while walking his dog to the park.

Splitting his time between the two cases, Bosch finds himself caught up in gang-related violence and must hope that Renée Ballard knows enough to be in the right place at the right time to bail him out of trouble.

Dark Sacred Night is subtitled A Ballard and Bosch Novel because Connelly presumably intends his readers to understand that Ballard should be considered the lead protagonist in this pairing. Bosch we already know exceedingly well; Ballard, we’re still going to be learning about.

Both detectives are law enforcement lifers with a shared intensity and dedication to the mission. One would think this like-mindedness would overlap and blur the two characters, but Connelly successfully maintains Ballard’s individuality by fleshing out details of her life that were introduced in The Late Show. He keeps us interested in her as a newly minted character with plenty of room for further development.

One of the advantages of pairing the two is that it allows us to study Ballard from Bosch’s point of view. Since we’ve learned as readers to trust his judgment through the course of his series, Bosch’s gradual, grudging acceptance of Ballard as an investigative “partner” helps our overall comfort level with her as someone who will be sharing Bosch’s limelight.

Beyond character, though, it’s Connelly’s absolute command of his narrative that makes his work so special. No doubt drawing on his early experience as a journalist, he always maintains a steady pace with no distractions. His prose is consistently clean and crisp. Point of view is controlled with confidence. His descriptions are minimal, modifiers are deployed judiciously, and every scene contributes to the advancement of his entwined storylines in one way or another.

The only questionable note in Dark Sacred Night is sounded when Connelly resorts to what could be described as police vigilantism as a plot resolution device. Given today’s taut atmosphere in America with regard to the behavior of police in carrying out their duties, one could wish that he would have reconsidered his choices in this regard.

Nevertheless, Michael Connelly remains the reigning heavyweight champion of police procedurals, and Dark Sacred Night is another knockout victory. It’s the latest in a long string of excellent crime novels that proves Connelly deserves the title of bestseller perhaps more than any other veteran author writing today.