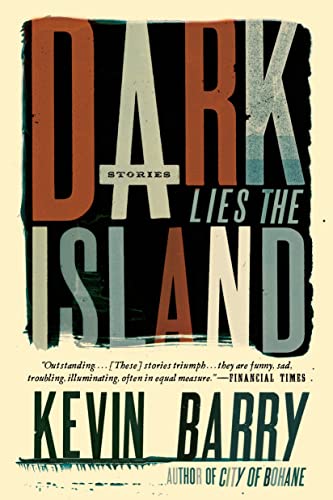 According to the publisher, Dark Lies the Island “is a collection of unpredictable stories about love and cruelty, crimes, desperation, and hope from the man Irvine Welsh has described as 'the most arresting and original writer to emerge from these islands in years.’ Every page is shot through with the riotous humour, sympathy, and blistering language that mark Kevin Barry as a pure entertainer and a unique teller of tales.”

Every word of this is true.

If anyone can do dark humor better than the English, it’s the Irish, and Mr Barry pulls no punches. Dark Lies the Island manages to be very dark at times, more so than some works offered as horror, yet humor is always there just below the surface waiting to squeeze a laugh from the reader at the most unexpected moments.

The prose and humor is unabashedly Irish—even British readers may need to check a word or two—but most readers will have come across characters like these who demand affection even if they are intrinsically evil.

The two old ladies traveling in their compact Toyota to the country house for tea and scones are archetypal maiden aunts—until they snatch a young girl from the crowd. What about those innocent-looking maiden aunts?

The short stories in this collection are not bound by any particular theme. Each stands on its own, from the kiddie snatching old ladies to the drug dealer who becomes involved in a bizarre sex ménage; and the alcoholic general practitioner (have they really vanished from England?) who finds solace with a group of travellers; to the father struggling to cope with his daughter’s sexual awakening and a wife who swigs Pinot Grigio from the bottle before lunch.

With so many short stories the conclusion is obvious long before the last page. Not so with Mr. Barry’s work. The only certainty is that the end will be a surprise—and most probably a shock.

Dark Lies the Island is a terrific little book that demands a follow-up very soon.