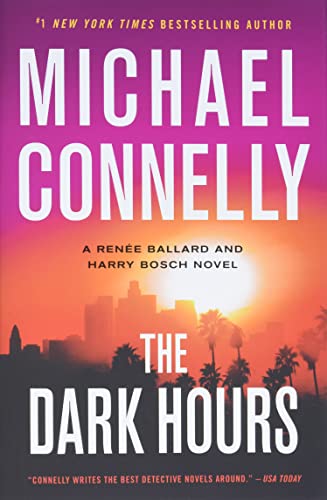 “Relentless pursuit of justice is the iron rod that runs through every Connelly procedural, and The Dark Hours is no exception.”

It’s New Year’s Eve, and Los Angeles Police Department detective Renée Ballard is once again working the late show, the midnight shift that will see more than its share of crazy behavior as another year begins.

Taking shelter beneath an overpass as thousands of revelers fire guns in the air in the “annual rain of lead,” Ballard is called to the scene of a shooting. It appears that an auto repair shop owner has been accidentally struck by a celebratory bullet in the middle of a crowded street party.

When she realizes that the victim was in fact murdered, and that he was a former gang member who bought his way out of the life many years ago, Ballard fights to hang onto the investigation as she also works a serial sexual assault case involving a pair of brutal rapists known as the Midnight Men.

Once again, she must look to retired LAPD homicide detective Harry Bosch for advice, guidance, and a helping hand.

The Dark Hours is Michael Connelly’s 36th novel, and it’s the fourth in the series featuring the Ballard and Bosch combination. It’s a typical Ballard story, as she struggles against the marginalization that comes with working the “dark hours” while at the same time resisting any attempt to move her to the day shift.

By now we’re familiar with her as a Connelly character. The pandemic has forced her off the beach and into a condo, where she chafes at the various rules and regulations her new neighbors expect her to follow. Her beloved dog Lola is gone, a cancer victim, but she’s looking for a replacement.

Interestingly, though, it seems that much of Bosch’s personality has bled into hers. She can’t suppress her impatience and frustration at the laziness or obstructionism of colleagues and supervisors, she pursues her suspects with a dogged persistence that costs her a lot of sleep and makes a lot of waves, and she doesn’t hesitate when the time comes to step outside the lines to bring justice to those who have it coming to them.

Is it a problem that there’s less and less of a distinction between Bosch and Ballard as her story continues to unfold? Nah, not really. Bosch is one of the best fictional detectives ever to hit the printed page, and if his author wants him to be superseded by another like-minded character, many readers will gladly hop on board. Continuity is most welcome as Bosch recedes into the background.

It hits home, though, when Ballard asks Bosch if he ever sees himself stopping detective work and he replies: “I guess when I stop, it all stops, you know?” Hopefully Ballard is a safeguard against this eventuality. She’ll keep him in the game as long as possible and carry his values and work ethic forward.

Connelly has chosen to root this story deep in contemporary events. The Dark Hours is a pandemic novel, taking place as the first COVID-19 vaccinations become available. Masks are worn or not worn, precautions are taken or ignored, and Ballard, who caught the virus and recovered, takes Bosch to Dodger Stadium to get his shot.

It also covers the January 2021 insurrection in Washington, DC, as Ballard and Bosch watch events unfold on television with disbelief and frustration. More immediately relevant to the story, though, is the ongoing movement to defund the police, which Connelly repeatedly draws on to explain the low morale currently infecting the LAPD and hampering Ballard’s efforts to pursue her investigations.

Is this the new LAPD? Officers “stripped of the mandate of proactive enforcement and waiting to be reactive, to hit the streets only when it was requested and required, and only then doing the minimum so as not to engender a complaint or controversy”? What Ballard thinks of as the “why-should-we-care disease” affecting the whole department?

Connelly is clearly concerned at the direction it all might be taking.

Overall, nonetheless, The Dark Hours is a typically well-told Connelly effort. He interweaves the murder and sexual assault investigations effectively, never allowing us to confuse the details of the cases, and Ballard continues to work as a character who maintains our interest. We want her to succeed, to do well, even as we hold our breath at her questionable decisions.

Relentless pursuit of justice is the iron rod that runs through every Connelly procedural, and The Dark Hours is no exception. As long as he keeps writing them, we’ll keep reading them.