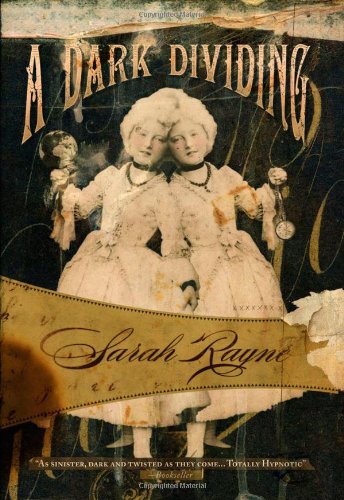 “A Dark Dividing is well worth a read. Sarah Rayne is indeed a talented writer.”

Harry Fitzglen is a formerly respected reporter now trying to work his back to the top and regain his former reputation. At the moment, he’s stuck working for The Bellman, a yellow journalism rag, and his assignment is to revive an approximately 20-year-old story about conjoined twins. When, some time back, their father died in quicksand, they disappeared. Then one twin, Simone, is rediscovered, reappearing in the world as a photographer. So Harry goes to Simone’s opening show.

They meet. He notices that she seems a bit fey; but the attraction between them is apparent. For reasons unapparent, Harry instead has an affair with Simone’s partner in the gallery, a rich party girl rather past her prime.

The story in A Dark Dividing is built out of parallels: in plots, characters, places. The first parallel is about Melissa Anderson and her conjoined twins, Simone and Sonia. Their father doesn’t want them separated, even though as such operations go, this is a fairly simple one. Why? Because he’s a politician, and he feels the sympathy garnered by the love he demonstrates to the public for his disabled children will further his career. He’s a bastard of the worst kind. Melissa and the twins escape Joe, but Sonia is kidnapped by a madwoman and Elizabeth believes Sonia dead.

The second plot concerns conjoined twins born around the fin de siècle, Viola and Sorrel. Their story is told through the diary of Charlotte Quinton, their mother. She lives a privileged life with her husband, Edward. He considers the twins a source of shame, tells Charlotte they’re dead, and sells them to a man who runs a false foundation for the poor in a house called Mortmain—“The Dead Hand.” When children at Mortmaine reach not quite pubescent age, they’re usually sold into prostitution. In the case of Viola and Sorrel, they were put in a humiliating freak show. However, they weren’t truly Edward’s children, but were fathered by Charlotte’s lover at the time, a man usually known as Floy. Floy’s home was a meeting place of The Bloomsbury Group, of which he was a member.

Here is where the book’s major flaw comes in: The Bloomsbury Group consisted of various members over time, but originally included such luminaries as writers Virginia Woolf and E. M. Forster; the painters Duncan Grant, Vanessa Bell, and Roger Fry; essayist Lytton Strachey; economist John Maynard Keynes; and critics of literature, art, and politics, Strachey, Fry, Desmond MacCarthy, Clive Bell, and Leonard Woolf. Only one or two these talented and influential people are even mentioned in the book, much less introduced. Why bother placing Floy among them?

A Dark Dividing includes lots of twinning—both literal and figurative, places full of evil and full of angry spirits, a psychotic kidnapper . . . And that’s is as far as we may go without tossing in spoilers.

This is a book with plenty of atmosphere, and the parallel structures work. It’s a complicated book in terms of craft and took skill to make it work—which it does. It may be that the psychic and psychotic blend were at times a little much, a bit ponderous, especially as the connections between the twins are by far the more fascinating than the explorations of psychoses. Nonetheless, A Dark Dividing is well worth a read. Sarah Rayne is indeed a talented writer.