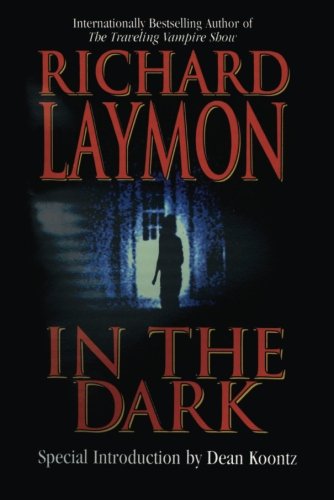 Do you believe that man can be as terrifying as any unnatural creation an author can invent? Proof, if it were needed, lies in the pages of In the Dark, a story that will have your heart racing.

Mr. Laymon plays relentlessly with the reader as he tells the story of Jane, a very ordinary librarian, whose dull existence is turned into a living nightmare. It all begins with the mysterious appearance of an envelope bearing her name. She has no idea how it was delivered, or by whom, and her colleagues are as in the dark as she is.

At the end of an otherwise uneventful day, Jane is drawn upstairs to the library stacks to turn off a forgotten light. Readers will be reminded of the ghost stories of M. R. James as the neck hairs begin to rise. She is suspicious of the man she finds lingering among the books but the man, Brace, a lecturer at the university, turns out to be quite innocent—or is he?

The contents of the envelope begin a perilous game in which Jane is promised ever increasing amounts of cash for following the instructions contained within. Just the manner in which she receives the envelopes is disturbing enough; the tasks she is given will have the reader calling out to stop her.

Tempted by the financial rewards and titillated by the danger, Jane gets dragged deeper and deeper into a terrifying series of events. At times, her resourcefulness almost makes her seem like Lara Croft, but it is only a minor irritation.

As Jane and Brace teeter on the edge of a relationship, Jane’s nighttime adventures collide with the doubts she has about him. Is he the mysterious Master of the Game? Richard Laymon’s cleverness is that he keeps the reader in the dark and only reveals the answer right at the end—after a frightening, supersonic, roller coaster ride.

This is the way to create horror without resorting to the supernatural, and author Laymon succeeds. Some of the writing comes over as a bit sloppy, but the book is ten years old and styles change. It would benefit from tighter editing—there are several errors that jar a bit—but, perhaps only pedants and editors will notice them.