The Daniel Plan: 40 Days to a Healthier Life 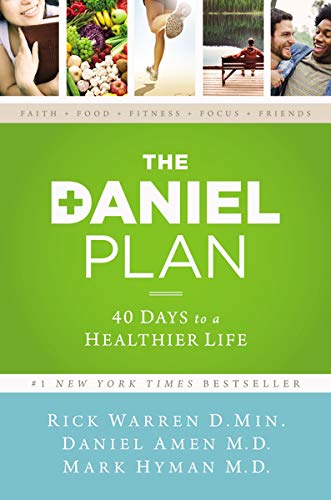 “The theology underlying the diet is fairly vanilla; it boils down to the message that ‘God wants you to be thin.’ Hard to argue with that. . . . For Pastor Warren’s massive audience, the weight is over. Those excess pounds won’t have a prayer.”

When Saddleback Church Pastor Rick Warren publishes a new book, it’s a little like Wal-Mart opening stores at four in the morning on Black Friday. The smartest thing you can do is avoid getting run over by the stampede.

Warren is the author of The Purpose-Driven Life, the bestselling book aside from the Bible in American history, having sold upwards of 30 million copies in its first five years of publication. Now Warren, along with rock star M.D. co-authors Daniel Amen and Mark Hyman, want to save not your immortal soul but your all-too-mortal body. The book is called The Daniel Plan: 40 Days to a Healthier Life because it purports to offer readers a path to the health and fitness of the biblical prophet Daniel.

Perhaps a better title would have been The Solomon Plan, in honor of the biblical king who cynically wrote that “there is nothing new under the sun.” That’s because The Daniel Plan pulls together useful information on diet, exercise, and brain health, but doesn’t break much new ground.

In all fairness, it’s hard for any diet book to bring something new to the dining room table because everybody knows what it takes to lose weight: eat less; eat better; move more. The uniqueness of the Daniel plan is the way it ties Christian faith and the benefit of community to the neverending struggle to lose weight.

Warren takes the position that your body may be a temple, but it’s not your temple—it actually belongs to your creator and is just on loan to you. As a result, people have an obligation to take care of their human form to at least the same degree that they take care of their spiritual lives. Warren and his physician coauthors tie Christian faith to proper eating: If you can gain faith, you can lose weight.

The Bible doesn’t exactly provide a lot of biographical detail about its personages, so Warren can offer only slender evidence that Daniel was any healthier than his peers—or you or I, for that matter. The good news is that when you choose a long-dead Biblical figure as your role model, you won’t be seeing him on TMZ rolling his car on Pacific Coast Highway, violating NCAA rules, or carrying a handgun into a crowded disco.

Five elements, all conveniently starting with the letter F, comprise the Daniel plan: faith, food, fitness, focus, and friends. The theology underlying the diet is fairly vanilla; it boils down to the message that “God wants you to be thin.” Hard to argue with that.

The food choices will engender a little more argument. Basically, anyone eating the standard American diet consisting of lots of processed foods, sugar, salt, and fat will benefit greatly from the recommendations that Warren and his co-authors offer. The tone is perfect for Warren’s presumed middle American, Velveeta-dipping readership. If you’re looking for passionate arguments against eating meat, you won’t find them here. Even coffee and alcohol, two verboten beverages for the purist eaters among us, can be enjoyed in moderation on the plan. The key benefit of the book is that it gets important concepts about nutrition into the hands of readers who may be unlikely to read or believe any diet book that doesn’t come with the stamp of a trustworthy figure like Pastor Warren.

You won’t find a lot of other diet books advising ten minutes of Bible reading or referring to insulin, cortisol, and two other substances as the “four hormones of the apocalypse.” Gotta love it.

The fitness section of the book follows the same lines as the diet—you most likely won’t be able to complete an ultra-marathon anytime soon, but you may just be able to drop those 30 pounds and run a 5K. The ties between faith and fitness seem a tiny bit strained, with advice like, “Squat up and down five to ten times while thinking about how you are becoming Daniel Strong. With each repetition, thank God for a strong, healthy body and the ability to move.”

Daniel Strong? Is that either an homage to or rip-off of Boston Strong? You be the judge.

The most exceptional part of the book comes when Pastor Warren shares Daniel Amen’s research on brain health, because Warren’s readers are not likely to pick up one of Amen’s books and gain access to this guidance. This will probably be new news to Warren’s readers who are already familiar with the Good News.

In that section we learn that “people who pray or read the Bible every day are forty percent less likely to suffer from hypertension than others.” The authors drop a footnote referring to a study that “proves” this fact, but most of the rest of us will have to take this one on faith.

The best story in the book comes in the Lifestyle section, and involves an African marathoner who came in dead last in the 1968 Mexico City Olympics because his body responded so painfully to the high altitude. When asked why he didn’t quit, he responded, “My country did not send me 5,000 miles to start the race; they sent me 5,000 miles to finish the race.”

If Pastor Warren’s prior publication history is an accurate guide, you can expect The Daniel Plan to fly off the shelves. There’s an old spiritual that asks, “Didn’t my Lord deliver Daniel?” Now Amazon will deliver Daniel to you. For Pastor Warren’s massive audience, the weight is over. Those excess pounds won’t have a prayer.