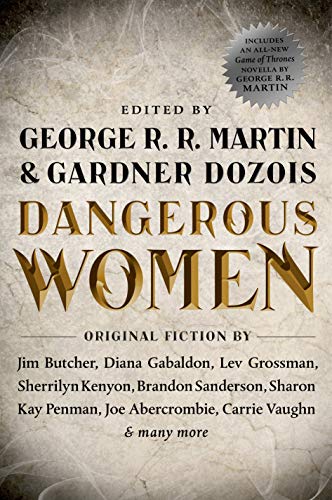 “. . . no doubt it will please the loyal fan market to which it is directed.”

This massive tome of nearly 800 pages appears to be tapping into at least a couple of recent trends with varying success. The first of these is the new fashion for enormous hardback books a characteristic to which sci-fi and fantasy fiction may be particularly prone; and the second is the surge in interest over the past year in women and gender issues.

While the editors and some of the other authors are “giants in their field(s)” a number of the others are relatively unknown. It seems likely that prospective buyers of this book will be attracted by one or more of the “big names” and may find new authors to please them if they persist in dipping into this frankly rather unwieldy volume, which has to be read lying down or at a lectern—neither of which may always be convenient.

Co-editor George R. R. Martin contributes a short story of 81 pages set in Westeros, nearly 200 years before his bestselling A Game of Thrones begins. This is actually a rather disappointing exercise for the non-fan and awkwardly written in a mixture of casual speech and Olde Englishe, the latter characterized by random capitalization and a plethora of “nigh unto” and “must needs.” Indeed several of the stories with historical or quasi-historical contexts—which channel Tolkien and Harry Potter to varying degrees—seem to be among the least successful.

What would we like to see in a short story that purports to talk about Dangerous Women? And which of these 21 stories seem best to fulfill the brief?

First of all a short story should have a beginning, middle, and an end.  Several of these contributions appear to have been sliced from or roughly excerpted from longer works.

Secondly, even if set in a sci-fi, dystopian, or paranormal world the actions should have the psychological credibility and resonance to keep the reader hooked; and the “dangerous women” element should be integral throughout. It is very unfortunate if an author has to take the last few paragraphs or an author’s note to explain how he or she has actually fulfilled the “dangerous women” brief despite appearance to the contrary (see for example A Queen in Exile by Sharon Kay Penman; Caretakers by Pat Cadigan, and Sherrilyn Kenyon’s Hell Hath No Fury).

The short story by Megan Abbott “My Heart is Either Broken” takes the prize in being, yes, short, at 22 pages; having a start, a middle section, and a convincing dénouement; and a truly chilling dangerous woman—without resorting to any paranormal or sci-fi special effects to get its story across.

Overall however the stories in this anthology are rather tame, the themes repetitive and banal, and most of them distinctively rooted in Middle America even where the trappings try to suggest otherwise.

There is a plethora of old ladies losing their faculties, beleaguered queens and princesses, an occasional loose woman cruising in a bar without her wedding ring, and a few witches.

Humor is unfortunately not a feature of this genre. Couldn’t someone have done a remake of the story of Eve for example, the most dangerous woman of them all? Or some egg-freezing experiment that went awry with scary consequences?

Nonetheless, there is little point in criticizing this anthology for what it is not for no doubt it will please the loyal fan market to which it is directed.