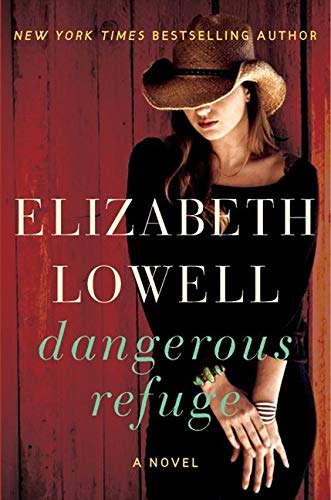 Elizabeth Lowell has mastered the art of writing romantic suspense. In a modern and edgy style, she takes a feisty heroine and a lion-hearted hero (both gorgeous, of course) through jeopardy in a dramatic setting, igniting sparks between them that burst into romantic flames.

For those who love this formula, the book is a grabber. For those who find it tiresome, either skip it or at least first sample Ms. Lowell’s accomplished prose before writing off Dangerous Refuge. There’s a wryness between the lines that give a sense of author presence, as if she knows she’s satisfying readership demand and doing her best to make it worthwhile, offering delightful one-line zingers and fresh descriptions.

“[She] burned like a carmine flame beneath a spotlight. The tousled, flaxen fall of her hair gleamed in silent testimony to the best shade of blond ever made in a chemistry lab.”

“Perfume slid around him like a jungle night, alive with primitive possibilities.”

“You could kill scorpions with that tone.”

“[A man frowned] over the phone system like a spaniel confronting a page of quadratic equations.”

“He walked up to and loomed over the desk like the Sierras over the valley, threatening to slide down at any moment.”

“Without the stage lighting of the . . . gala, [the Sheriff] had the command presence of dryer lint.”

“The Ground & Pound gym sulked in the corner of a mostly abandoned strip mall, notable only for its swath of dirty white stucco and black glass windows. A ragged assortment of pickup trucks beaten into varying colors of submission by dirt and sun were parked out front.”

All these salted between dialogue, which carries most of the story.

As for story itself: The hero, Tanner—a cop—is the most engaging character. The narrative swaps between his point of view and the heroine’s, and grows more interesting each time it cycles back to him.

Shaye, his amour, is a good soul and darn resourceful but otherwise less credible and likable than her romantic counterpart. They do work well together, however, and when the going gets tough—and the book gets exciting—they help each other out of a really sticky jam.

They meet when Tanner comes home to Nevada to settle his uncle’s estate. Shaye, meanwhile, had been working with the uncle to gain his ranch for the conservancy she works for. It doesn’t take long for them to realize that the uncle was murdered for this land, and to step hip deep into the trouble he left behind.

Tanner’s cop training and instincts coupled with Shaye’s social graces make them perfect for unearthing secrets. It also makes them conspicuous targets for the killer while they wait for seeds planted to bear fruit. “Investigation,” Tanner says, “is another word for patience.”

The case finally breaks when Shaye is snatched by the killer under Tanner’s nose.

It gives nothing away to say Dangerous Refuge has an upbeat ending: the genre requires it. What Ms. Lowell does is take an original zigzagging journey to that point in enjoyable language, earning her the popular following that she has.