The Dangerous Divide: Peril and Promise on the US-Mexico Border 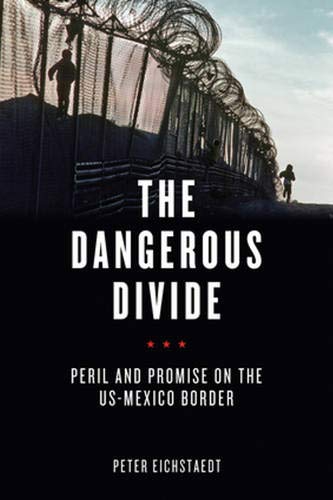 “The central question guiding these conversations is how do we balance border control and America’s need for a vital workforce through humane and viable alternatives to xenophobia and a fortress-moat mentality?”

Drones and other high-tech sensing and surveillance devices dominate the exhibition hall at the annual Border Management Conference in El Paso underscoring the escalating militarization of the US-Mexican border. “Merchants of border security ply their products in a machismo-charged atmosphere where the ethos is pure: stop a threat to America that did not exist a decade ago.”

Since the attacks of 9/11, the U.S. Customs and Border Protection Agency has ramped up security along the southern frontier because of the terrorist phobia, on top of the ongoing war on drugs and the crusade against immigration. “In the minds of the masters of border security, the threats posed by jihadi terrorists are blended and blurred with the Mexicans who desperately cross the border in search of jobs.”

In The Dangerous Divide: Peril and Promise on the US-Mexico Border, veteran journalist Peter Eichstaedt intends neither a comprehensive policy analysis nor an exposé of the Mexican drug cartels.“Plenty has been written on that already. Rather, I roamed the roiling borderlands and found that they have become something that few could have imagined.” The legendary semi-porous borderlands of shared history and culture have become a terra incognita of carnage, a frontier of fear.

The confluence of the perceived terrorist threat, the surging power of the Mexican cartels after the 1994 North American Free Trade Agreement increased drug entry overland, media reports of horrific narco-violence, and the construction of a frightening border fence has stopped normal cross-border intercourse dead.

American tourist excursions to Mexican border cities for souvenir shopping, bullfights, authentic foods, or rollicking weekends in clubs and bars are just a memory. And only the most intrepid still slip south for cheaper dental work.

Meanwhile, fewer frontier Mexicans cross the line daily to work, study, or shop. Mexican children who attend American schools often encounter resentment in the U.S. and pressure to become drug mules on the Mexican side, while it is not uncommon for school buses to be delayed by shootouts.

In his travels, Mr. Eichstaedt interviewed migrants, agricultural workers, ranchers, Border Patrol officers, and other government agents, politicians, community residents, social workers, religious personnel, and humanitarians who aid migrants at risk. He also visited a Mexican fair-pay coffee cooperative which may reduce the need to seek a livable wage in the U.S.

The central question guiding these conversations is how do we balance border control and America’s need for a vital workforce through humane and viable alternatives to xenophobia and a fortress-moat mentality?

Via vivid vignettes, we hear from migrants so desperate for work or to be reunited with family that they risk attacks from desperados, death in harsh border environments, arrest, deportation and even jail if they attempt to cross multiple times. Good Samaritans, who ignore the law against assisting illegals, cache water jugs in the desert and tell of their frustration when the Border Patrol, ranchers, and vigilantes drain the containers.

Mr. Eichstaedt’s account of his nighttime ride-along with the Border Patrol where he sees how groups of migrants are apprehended and processed is particularly eye-opening, as is a tour of the Tucson office and the complex surveillance systems at ports of entry.

“Border Patrol agents are on the front lines of what can be a dangerous and deadly war that battles the illegal importation of people and drugs.” And sometimes lines blur as agents succumb to the temptation of easy money and collaborate with the cartels. As a veteran agent remarks: “Patrolling the border is not like selling groceries.”

Equally riveting is a segment on the 2011 Columbus, New Mexico gun-smuggling scandal in which town officials including the police chief and mayor were convicted for their roles in an operation that put high-powered assault weapons in the hands of Mexican cartel killers.

“The Columbus gun-smuggling ring illustrates the corruptibility of the border communities and the cross-border reach of the cartels. But it also lays bare the gaping holes in US gun laws and exposes America’s role in enabling, abetting, and profiting from the horrific killing carried out by cartel gunmen.”

Even more chilling are the interviews Mr. Eichstaedt conducted with advocates of draconian border security measures, which came to a head in the 2010 fight over Arizona’s Senate Bill 1070, widely known as the show-me-your-papers law, which dramatically increased the mandate of police to detain undocumented individuals.

This bill was challenged for usurping federal authority over immigration control and enforcement. But in 2012, the US Supreme Court upheld the part of the law allowing immigration status to be checked under a “reasonable suspicion” that people are in the country illegally; however, the court ruled against three other parts of the law which would have made it a misdemeanor for migrants not to carry immigration papers, criminalized the search for work by illegals and allowed officers to make an arrest solely on the suspicion of having committed a deportable crime.

Despite this ruling, right-wing politicians, vigilantes, and other Arizonans continue to advocate tighter border control based on “a deplorable lack of interaction, unfortunately fueled by fear and ignorance.”

Mr. Eichstaedt concludes that not only has the massive spending on southern border security been ineffective (drugs and migrants continue to cross the line while not one terrorist has been apprehended,) but also it has further polarized American attitudes to immigration; however, he ends on a hopeful note suggesting pragmatic strategies for reducing illegal migration and legitimizing essential Mexican labor in the US via guest worker visas.

This is a provocative and engaging book—a useful read for anyone seeking to understand current challenges and opportunities along our southern border. But there are flaws.

The reliance on interview vignettes makes the narrative choppy. The segments on Latin American contract sheepherders in Colorado and on land occupations in northern New Mexico seem anomalous to the borderland focus. The historical material reminding us of past ties that bind and contentions that divide could be better integrated into the present narrative. The statistics used to bolster arguments can be tedious and lack finesse in interpretation.

Lastly, the author’s thoughtful and balanced interviews with both advocates of border control and proponents of border relaxation will likely be seen by the right as heavy-handed liberal polemics and by the left as toothless humanitarianist apologia. But that underscores the depth of the ideological chasm underlying the current controversy over immigration reform. And socially just alternatives don’t stand much of a chance without the will of the American people to sustain them.