A Dangerous Business: A novel 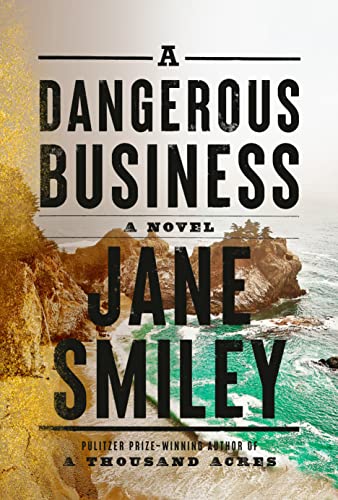 “There’s a lot of entertainment in seeing Eliza apply the methods of a fictional detective to the hazards of her dangerous life. Well-researched and smoothly told, the book is fine entertainment and offers a fresh perspective of women’s ways of surviving the frontier.”

Deftly blending a clever murder mystery with historical strands, Jane Smiley in A Dangerous Business offers an entrancing view of California life in the 1850s Gold Rush days. Framing the story of a young widow working in a house of prostitution, Smiley proves once again that society when viewed from beneath can be messy and violent—but also tender and intriguing.

Eliza Ripple is mostly better off than during her brief marriage, despite the demeaning physical nature of her job. Her employer, Mrs. Parks, both respects and supports her, as long as she performs her duties and maintains an attractive appearance and surface persona. Despite the obvious dangers of submitting to the desires of strangers who sometimes exert anger and even violence in the bedchamber, Eliza feels well protected by both Mrs. Parks and the live-in bodyguard Carlos; if she leaves the chamber door open a crack, Carlos understands that she is frightened, and if her employer is concerned, she too will set the door slightly ajar. It’s a supportive situation.

That is, until Eliza begins to explore the terrain outside the working downtown of Monterey in the company of another young woman sex worker, Jean—who tends to the physical desires of women instead, often in terms of massage and comfort, rather than what Eliza calls, for men, “doing their business.” The new allies savor a country ride . . . until the moment when they find the body of a young woman, probably one of the several who’ve recently gone missing.

In a charming if naive fashion, Eliza and Jean attempt to apply the detective methods shown by Dupin, a detective in the popular fiction written by Edgar Allen Poe. Naturally, they are quickly over their heads, and discovering yet another corpse—this time, of a woman who’d been kind to them—is an appalling experience. Yet they feel called to focus and “detect”:

“Eliza said, ‘We have to look for signs.’

‘About who did it? Yes, but then we have to remember what we saw.’

‘No way to write it down.’ Eliza glanced around. She didn’t see ink or a quill.

Jean took a few deep breaths, then said, ‘We repeat it until we can remember it.’”

Smiley crafts a neat tale of investigation and self-discovery, while managing to maintain a portrait of prostitution as a surprisingly kind necessity of the time. Eliza is methodical and insightful, and the support around her protects her from serious harm, even from threat for the most part. As in the classic Western novels, this gentling of “a dangerous business” makes the book easy to relax with—but may not be as accurate as one could hope.

Even if Eliza survives her improvised murder investigation, will she still be employed? What is the future of a woman without family in the Wild West? And what kind of friendship is she developing with Jean, whose “skills” are so different from her own?

A Dangerous Business is relaxing reading, and there’s a lot of entertainment in seeing Eliza apply the methods of a fictional detective to the hazards of her dangerous life. Well-researched and smoothly told, the book is fine entertainment and offers a fresh perspective of women’s ways of surviving the frontier.