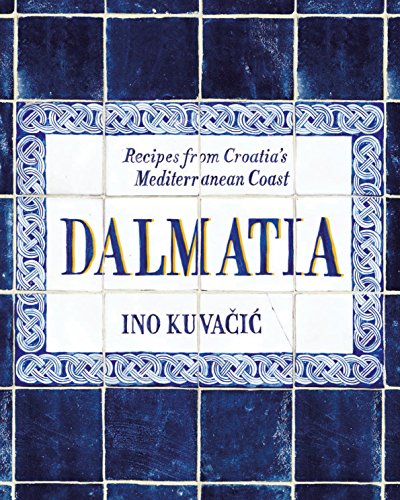 “[has] great appeal as a cookbook of Mediterranean food par excellence.”

What a great cookbook, I thought before even opening Kuvačić’s, Dalmatia: Recipes from Croatia’s Mediterranean Coast, and for a very simple reason: There are so few cookbooks devoted to this neglected cuisine that any entry is going to be great. On that note Kuvačić doesn’t disappoint.

There are several reasons why Croatian cuisine is not better known, one obvious one being it is culinarily sandwiched (pun intended) between two far more alluring and famous cuisines, namely Italian and Greek. Furthermore, Croatian cuisine is also heavily influenced by those cuisines as well as the Turkish and the Austro-Hungarian legacy. All this adds up to a perfect storm of being overlooked.

In all honesty, as unfair as it might sound, flipping through a Croatian cookbook certainly does give one the sense that the cuisine is derivative. One momentarily doesn’t remember if they are looking at an Italian cookbook instead. It’s true, as one works one’s way through a Dalmatian (the Adriatic coast of Croatia) cookbook such as this one nearly every recipe can be linked with its Italian counterpart.  After all Italy is a hop across the inland sea from Dalmatia, and the Republic of Venice controlled the Dalmatian coast for hundreds of years.

However, it should be remembered that it is within these subtleties of culinary borrowing that a distinctive Dalmatian Croatian cuisine reveals itself.  Put simply, if you like Italian food you’ll like this cookbook.

The book is very short on history, but rich with photos and delicious recipes, many quite easy to make, such as the sour cherry soup (juha od maraske) that consists of cherries, sugar, red wine, cinnamon, clove, and cream.

The stuffed bread from Vis (viška pogača) the author tells us might be related to the stuffed breads of Sicily as Vis was founded by Greek Sicilians in 397 BCE. The filling of cooked onions, tomatoes, parsley, and anchovies is quite reminiscent of the stuffed focaccia of Sicily’s eastern provinces of today. The cabbage with pasta sheets (krpice sa zeljem) sounds very much like the lagane con cavoli verze (pasta with Savoy cabbage) of Italy’s Apulia region. There are simple dishes for mushrooms, Swiss chard, zucchini, and so forth that are not only enticing but easily accomplished by novice cooks. The eggplant, potato, and tomato bake has its identical counterpart in Italy.

Befitting its Mediterranean location and its Adriatic coastline, in Dalmatian cooking vegetables as well as fish play a role. Fish tend to be cooked very simply as they are in Italy, perhaps grilled, fried, or in fish soups. The squid ink risotto of Venice appears in Dalmatia as crni rižot.

There are unique dishes as well, the most enticing perhaps being Dubrovačka maneštra, the traditional soup known as Dubrovnik soup (maneštra being derived for the Italian word for such thick soups, minestra). Just reading the ingredient list will propel you into the kitchen to make this hearty soup on a winter’s night: smoked pork hock, lamb jerky, pork sausages, garlic, pancetta, potatoes, Brussels sprouts, zucchini, and green beans.

Much of the familiarity of this cookbook derives from Dalmatia’s close proximity, geographically, historically, and environmentally, with Italy, but that does not detract from its great appeal as a cookbook of Mediterranean food par excellence.