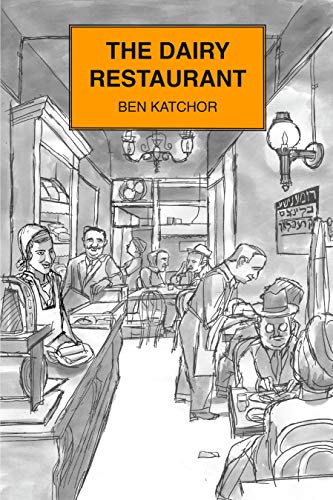 Ben Katchor has captured the spirit of old Jewish New York in his graphic novels such as Julius Knipl, Real Estate Photographer and The Jew of New York. The Dairy Restaurant isn’t a typical graphic novel, though there is art. Instead it’s a fascinating hybrid format, part history/philosophy/rumination, part graphic imagery.

There is no main character here to follow, no typical Jewish nebbish in the Katchor mold. Instead, Katchor starts with the Garden of Eden, presenting it as the first private eating establishment. From there the book is breathtakingly wide-ranging, following Jewish history through its food from early biblical history to the middle ages to the Renaissance and onwards into modern times. There’s an immense amount of reading and research crammed into these pages, all served up in an easily digested format.

Katchor looks at animal sacrifice and the origins of kashrut, the laws of what is permitted for a Jew to eat and what is not. There is an interesting section on the prohibition of mixing meat with milk, something not only permitted, but considered sacred in other religions and cultures. Katchor effortlessly bridges how a “specific ritual prohibition was transformed into a dietary law and then a culinary style.”

He segues seamlessly into the invention of the restaurant and how certain diets took on philosophical implications (vegetarianism for one, something promoted by political figures such as Leon Trotsky who wrote about the virtues of a vegetarian diet). He includes “A brief history of the vegetarian impulse [which] leads from Pythagoras to Plutarch, to certain early Fathers of the Church. . . . to Voltaire, Shelley, and Alexander Pope.”

Through it all, he mixes in the history of anti-Semitism, how Jews were separated by their unique diet and kicked out of mainstream restaurants when they turned their back on kosher laws. There is a delightful section on Tevye, the milkman star of Fiddle on the Roof, the musical based on Sholem Aleichem’s stories. “Tevye embodies the ruminant behavior of a milk-giving animal. . . . In a single sentence, he can go from revolutionary zeal to religious resignation.”

After reading Katchor, Aleichem’s stories glow with a unique depth and meaning. What seemed like mere folklore take on greater significance. “The Tevye stories were sparked by the character of an actual milkman in Boyarka. Vacationing there in the summer, Sholem Aleichem saw the black humor of a poor Jew supplying the demands of a European pastoral fantasy in late-nineteenth century Russia.”

This kind of careful scrutiny is carried into the 20th century and not-so-long-ago New York, with a description of various kosher restaurants by neighborhood, including advertisements and menus. Most people think of delis as classic Jewish food, with thick meaty pastrami sandwiches as the signature dish. Katchor focuses instead on the humble dairy restaurant, the eatery that serves only vegetarian food. Still, these places were essential cultural centers: “A neighborhood pawnbroker explains, ‘You will hear all lanquinches spoken there: Bolish and Russian and Hungarian and Dutch and German and French. You will meet people there from all parts of the United States. . . .”

The book moves to contemporary times and the last part features an exhaustive listing of historical dairy restaurants in New York by neighborhood. The one getting the most attention is justifiably Ratner’s Dairy Restaurant at 179 East Broadway. Founded in 1905, Ratner’s was a mecca for Jews worldwide until it closed its doors in 2004. Hope is not lost for these treasured eateries, however.

Katchor observes that with the growth of the modern Orthodox and Hasidic Jews, such places will always find a clientale. “And each customer embodies a complex blend of impulses; the traditional, the radical, the pastoral, the industrial.” And the nostalgic. As in all of Katchor’s books, The Dairy Restaurant lovingly chronicles and restores a vanishing cultural fixture for us. This time, though, he’s added a thick lawyer of scholarship and though-provoking musings. He has served up a very satisfying dish here.