Daily Bread: What Kids Eat Around the World 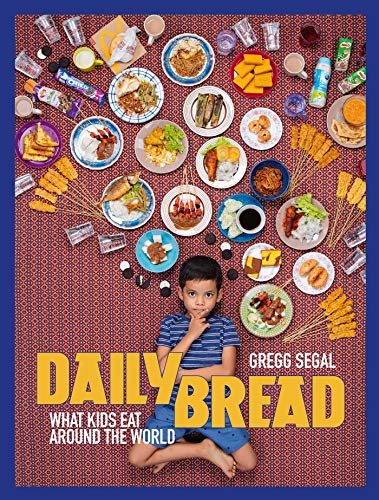 “Well-produced and intriguing, Daily Bread is a touching and sincere project with huge potential to influence the next generation and perhaps eke out some more healthful lifelong habits before they become problematic.”

Daily Bread is a rich and expressive photo-journal documenting what a weekly diet looks like for an average kid in all corners of the world, from Los Angeles, CA, to Dubai, UAE, and several stops in between. Food for thought (pardon the horrendous cliché but it could not be more appropriate) is covering each and every page, with an audible “wow” exclaimed at the turn of the next, and the next, and the next, of roughly 50 photos.

Going around the world, Segal and his crews cover nine countries. Fairly impressive in its scope, the logistics of coordinating the international variety of inquiry is somewhat remarkable, particularly in the images and stories of the kids who are from slums, outlying neighborhoods or inconveniently remote locations. He has taken care to balance gender, race, and socio-economic circumstances.

Segal happened upon this food venture idea while working on his 7 Days of Garbage book in which he photographed people surrounded by their own trash. He noticed that most of the trash was from food-related packaging and wondered what it would look like to chart seven days’ worth of food consumption. Because most of our eating habits are formulated when we are nine or ten years old, he thought it would be particularly interesting to track the kids’ eating habits and see what that might reveal.

Starting locally, Segal tested his concept with his own young son and the kids he knew near his neighborhood in Altadena, CA. All of the California-based shots are taken during January, February and March 2016. The shoot dates for each image are provided and it is interesting to track his movements. In 2017 he traveled to Italy, Malaysia, India, Germany, Senegal, and France. In 2018 he included Brazil and the United Arab Emirates. A map graphic would have made a welcomed bonus pop to this presentation.

Adding to the eclectic, cross-cultural mix is the twist that not all the kids were actually nationals of the countries in which they found themselves living. Young Majo, a seven-year-old boy in Germany, is a refugee from Syria. Surprisingly, his photo includes Heinz ketchup bottles, a juice box, a soda bottle, potato chips, and a smattering of highly familiar Western staples. Pluck little Majo out of the Hamburg photo shoot and plop him down in Any City, USA, and he would blend right in, as would his eating habits. One wonders what his Syrian eating habits might be if he was currently living there.

The same thing goes for every other child from the youngest five year old to the pushing the bounds of adulthood 17 year old. All of them look like your average US-born American citizen. All of them, it seems, have been influenced by US-born-turned-multinational food conglomerates.

Daily Bread is making a statement on just how similar our food habits are across the cultures. We all crave familiarity, comfort, and community, and food is so foundational to our humanity forming the basis of our most significant interpersonal relationships. However, we are slowly handing the power to nurture those we love over to impersonal corporate profit and loss statements.

Nine year old Kawakanih is the exception. Being raised in a tribe in the Amazonian Basin of Brazil, she is accustomed to indigenous diets of readily available fruits, nuts, and fish-based meals. She is stunningly positioned around enormous leaves and palm fronds wearing seed pods and a beaded skirt with her skin painted in a tribal design. Hers and another young Brazilian, Ademilson’s, are the only two photos to include nature as a framing reference connecting the kids with their food.

As both Segal and Wilson touch upon in their writings, food is now globalized as are the health issues that accompany said food. Obesity is not a Western debacle. The Middle East has seen obesity rates that are double the world average and in 2014 nearly 20% of the population in the UAE had diabetes. Some of the world’s poorest countries have the healthiest diets with nine of the ten highest nutritional diets found in Africa. Numbers one and two on the list are Chad and Sierra Leone, where junk food is too hard to distribute because of the terrible infrastructure and the complexity of standardizing distribution supply chains.

Wilson describes this phenomenon as the “nutrition transition,” and nowhere is this more evident than in, “these mesmerizing photographs [that] show a generation of children learning to eat in a world of radical change.” On the one hand this transition is to be celebrated because it is addressing world hunger, but on the other hand, the quality of the food is decreasing, and food related diseases are on the rise everywhere.

Most of the kids in the photos were able to see their own images, after Segal shot them, come up instantly on his computer screen. The bird’s-eye photo format offers a big-picture view of what the kids were putting into their bodies so there was no denying their consumption. Home cooking was being overrun by packaging. In several cases, the kids were convicted by what they saw: too much junk, not enough green.

Also on display among the photos are the lives of these youngsters—the intimate things they think about, hope for, and are working to make realities for their futures. They show personality in their clothing, their facial expressions, the toys they choose to be posed with, and the short interview clips that accompany their photos. It’s all too charming for words. Well-produced and intriguing, Daily Bread is a touching and sincere project with huge potential to influence the next generation and perhaps eke out some more healthful lifelong habits before they become problematic.