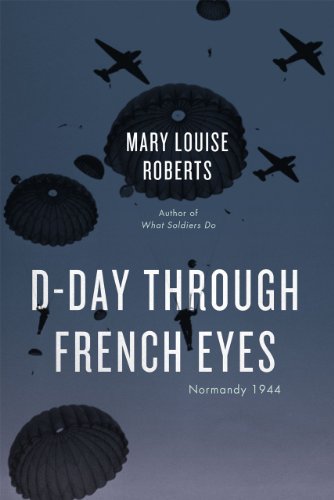 “Dr. Mary Louise Robert's work is commendable, finally, because her work reminds readers that D-Day was not only a positive event that reestablished freedom, but that its cost was tragically high for all concerned.”

Among books that examine 20th century conflict, there is a distinct and salutary trend that focuses on presenting civilians' personal experiences and narratives. Rather than memoirs and personal diaries of generals and political leadership, this movement positively focuses on firsthand accounts of people truly and directly affected by major events such as Operation Overlord during World War II. This is continued by the work of Dr. Mary Louise Roberts in D-Day Through French Eyes: Normandy 1944.

Dr. Mary Louise Roberts, a professor of history at the University of Wisconsin-Madison, examined the experiences of French citizens previously in a work entitled, What Soldiers Do. While that publication focused on the darker elements of American forces' actions during the liberation of France, her recent publication is balanced and indicates the development of an interesting and useful niche in this historical field.

After a succinct introduction, D-Day Through French Eyes is presented and organized thematically into six chapters. Each chapter is then developed through a series of excerpts from memoirs written by a wide variety of French citizens. A majority of these narratives are tragic but also full of optimism at the possibility of final liberation from the Nazi Occupation. Even then, a sense of foreboding is consistently apparent in the memoirs cited because most French citizens were unsure of how Operation Overlord was progressing or if it was succeeding. A number of narratives are also witty and anecdotal; this balance of depressing and hopeful outlooks keeps this interesting book moving.

The first two chapters, "The Night of All Nights" and "The Paras" focus on civilians' first experiences with D-Day as it initially unfolded through bombardment of the Cotentin Peninsula and the subsequent assaults upon the Norman Beaches. Chapter three, "Devastation," examines the direct destruction of French cities and villages as well as the larger perspective of the overall campaign. This is noted by the author in her introduction:

"For the French people . . . the Liberation was joyful but also chaotic and confusing. Besides the devastating effects of a war fought on their own soil, they had to deal with political uncertainty and the shame of collaboration as well as the humiliation of diminished national prestige."

This commentary is an example of the type the author uses throughout as she introduces various citizens and how they dealt with both their personal experiences and what they, in many cases, thought about the bigger picture of Europe's Liberation.

While Dr. Roberts incisively analyzes local events surrounding D-Day she fortunately does not get in the way of her source material or obscure it by over-commenting. Rather, she acts as a guide who sets up what are typically very literary accounts. One, by a schoolteacher named Madame Hamel-Hateau near Sainte-Mere-Eglise, recalls Hamel-Hateau's experience of paratroopers landing near her home. The account serves as a vivid example of the type of writing the author presents in D-Day Through French Eyes:

"Mama goes to sleep right away. But I sit on my bed and continue to study the rectangle of cloudless night carved out by the window. The need to sleep slowly overwhelms me, but my eyes remain wide open. It is in this sort of half sleep that I begin to see fantastic shadows, somber shapes against the clear blackness of the sky. Like big black umbrellas, they rain down on the fields across the way, and then disappear behind the black line of the hedges."

Such accounts as this one make up approximately 70 percent of the book. As noted, Dr. Roberts consistently provides relevant and interesting comments that turn the book into a positive cultural history of the period. Her brief discussion, for example, of how the silk from the British and American parachutes was used for multiple purposes, including serving as the material for wedding dresses, adds depth to the period.

Similarly, not many military historical accounts include what American GIs thought of the local, strong, Norman-made alcoholic beverage Calvados, or what the first reactions of French citizens were to American Jeeps, chewing gum, and other previously unknown American products. Overall, Dr. Roberts captures these and other culturally relevant details that enrich other, more traditional accounts of the period. In this regard, specialists as well as general readers will benefit from the work.

An important detail of the book's presentation includes the logical, brief, and helpful transitions between vignettes and memoir excerpts. As noted, introductions and commentary are interspersed in a manner that moves the overall narratives efficiently. Additionally, narratives are chosen that truly provide a great deal of material to consider. An example of this includes an excerpt from chapter four, "First Glimpse," which demonstrates how quickly military operations descended upon the French population as Americans moved through their villages and towns:

"The first American soldier slowly approached our dining room window. Beads of sweat were running down his grim face. He took aim at us, and once he was sure there were only civilians, he continued on his way, still on his guard. The second gave us a stone-faced look. The third winked at us. The following ones said 'Hello' or 'Good Morning,' hugged us, and said, 'Merci!' For the tenth, we took out a bottle of cider. A few dozen later, and we had moved on to the Calvados!"

D-Day Through French Eyes: Normandy 1944 is an interesting and highly useful book for scholars seeking primary source material. Importantly, readers may gain further insight into how Operation Overlord unfolded in a manner that was simultaneously grief inducing as well as liberating. Dr. Mary Louise Robert's work is commendable, finally, because her work reminds readers that D-Day was not only a positive event that reestablished freedom, but that its cost was tragically high for all concerned.