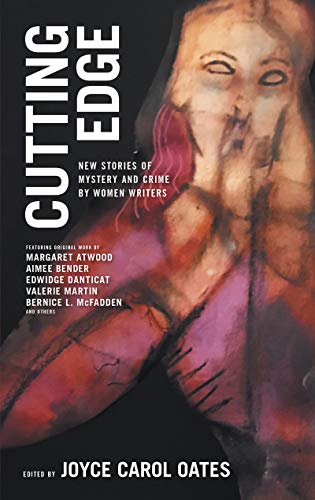 One of the best things about Cutting Edge: New Stories of Mystery and Crime by Women Writers, edited by Joyce Carol Oates, is that it is so very Joyce Carol Oates, every story imbued with that sneaky, creepy, human, usually-male-but-not-always-sometimes-female-and-when-female-it’s-the-man’s-fault darkness that begins with dread, escalates for pages, and then happens just as we feared, but not before it shows us something else, something we were not expecting.

Here is the opening story by Livia Lewellyn, titled “One of These Nights:”

“I reach across the stiff leather seat, holding out my hand.

“Mr. Miller places a bottle into it, but as I draw it toward me, he grabs my wrist. His hand is so large, his skin dark against the white of mine. He lowers his head, and in the dark of the car, I feel his lips against my skin. ‘Someday, girl,’ he whispers, his rough whiskers scratching the letters out against my flesh.

“He thinks his mouth is a volcano, that my blood is exploding into hot vapor, that my bones are shattering at his touch. He thinks he’s going to make me a woman like he did with Julie. That little girl in the changing room knows how a woman is made. He doesn’t have a clue. My heart is a cluster of wires, transmitting all the terrible longings from the dark spaces inside my body into Nicole’s gelid gaze. We stare at each other, stare at her father, who stares down the black, empty road.”

Like Lewellyn’s, the rest of the stories echo recurring themes in Oates’ own work: sexually dystopian suburbs and corporate enclaves as sources of trauma, little girls trying to grow up too fast, technology as science fiction-henchman, and men getting what’s coming to them at the hands of women who’ve more than slightly lost it.

There are also, of course, victims, but this collection is not overly concerned with them, the stories more focused on showing how the world they live in contributes to their demise, sometimes from unwarranted innocence, sometimes from comeuppance, but either way not a sentence wasted feeling sorry for them.

Here is Bernice McFadden with “OBF, Inc.” (the OBF stands for One Black Friend), a story about the job interview from hell that serves up a brilliant take on current racial politics via well-executed satire and nuanced arguments on the depersonalization of black victims of institutionally-supported crime in the United States.

“Mrs. Americus glanced at his résumé. ‘Perfect.’ She reached for the dying cigarette and brought it to her lips.

‘And according to your application, you’ve never been arrested. Is that true?’

‘Well, we will be doing a background check.’

‘Do you have any bad habits? Do you use narcotics?’

‘No judgment, Mr. Jamison. Again, I just need to know.’

‘Good!’ she exclaimed, drumming your fingers on the desk. ‘Let me tell you the specifics of the job . . .’

“Some of the faces behind the glass frames looked familiar. Again Andrew found himself squinting. Was that Omarosa? He pitched forward in his chair.

‘Um, yes,’ she spouted. That is who you think it is. She’s one of our best recruits.’

“The woman you were certain loved you

did not. Never did.

A puckered heart she had,

testicle on a plate

She used to cut your grapefruit for you,

have a Scotch waiting,

knives and poisons on her mind.

But of course, in the end, it isn’t the themes or the innovations on the format of the short story anthology that make the tales collected in Cutting Edge most “feel” as if you were reading Joyce Carol Oates herself. It is the writing. The tight plots and fresh, flowing prose that go about their business until—snap!—the story’s well-oiled mousetrap does its job.

“There was an underwater quality to the scene, a sense of the world slowly distorting, swaying to the tempo of distant currents; a lack of static dimensionality, as though the universe might, at any second, cave into something more fantastical. Standing there, rooted in the vestibule of a home that no longer felt like his, an aurora of polished glass set in rosewood bruised black by the storm-tossed dusk, Henrik felt lost. Submerged again in the Baltic, swallowing salt water with every scream.”