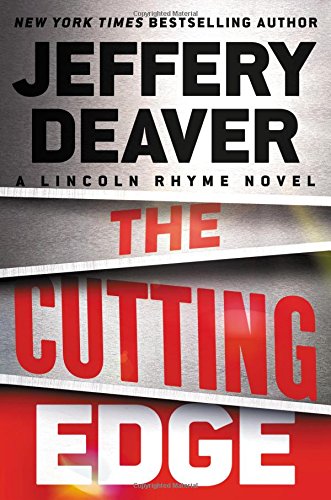 Lincoln Rhyme and Amelia Sachs return to New York City in Jeffery Deaver’s new novel, The Cutting Edge, in which Manhattan’s diamond district is gripped by terror. Three people are brutally murdered in a jewelry store while a fourth, a talented young diamond cutter named Vimal Lahori, barely escapes with his life.

Rhyme and Sachs are quickly on the trail of The Promisor, who left a fortune in gems behind in the jewelry store and who seems to be stalking engaged couples rather than their diamonds. Can they track down the witness, Vimal, who has gone underground while fearing for his life, before The Promisor reaches him first?

Deaver’s novel presents a great deal of information about diamond cutting and the industry in general. Additionally, he structures The Cutting Edge in five sections based on the stages through which a rough stone passes before becoming a finished diamond: plotting; cleaving; sawing; bruting; and brillianteering. This structure is intended to represent, one assumes, the process by which Rhyme proceeds from mystery to solution.

While the diamond-related information is interesting, the rest of the story is tedious, at best. Although readers will choose this book off the rack because it features Rhyme and Sachs, perennial favorites in the genre, our intrepid heroes are constantly shoved aside so that Deaver may write from the point of view of the bad guy, the escaped witness Vimal, various victims, and other sundry characters.

In the first 200 pages, in fact, Sachs and/or Rhyme appear in only 96 pages. That’s only 48% of the first half of the novel devoted to the central characters people buy the book to read about, as opposed to 52% spent on flat, stereotypic, and downright boring stick figures and caricatures.

This bait-and-switch approach to storytelling is typical of Deaver’s novels. In The Burial Hour, his previous offering, it seemed more palatable as a technique because the setting was Italy and the alternate characters were interestingly Italian.

In The Cutting Edge, however, we have a malevolent Russian import who talks like Gru from Despicable Me, victims who are a poor attempt at supposedly loving couples, and yes—wait for it—a nasty FBI guy who’d just love to throw Rhyme behind bars, wheelchair and all. How’s that one for something new and different?

The Cutting Edge is a disappointment. Rhyme and Sachs are very good protagonists, and the scenes in which they appear always seem to be quite well written. However, the intervening chapters that feature poorly drawn, unbelievable secondary characters and situations are dull and uninspired. At the same time, Deaver dumps a plot twist into the reader’s lap that’s half-baked at best and seems like something that occurred to him halfway through writing.

This combination of unfortunate factors makes the novel something you keep putting down so that you can go do something else. It takes longer and longer to pick it up again, you read less of it each time, and then finally you just don’t bother anymore and the book ends up on a shelf somewhere, unfinished and forgotten.

If Deaver would put more time into inventing a plausible storyline and ease up on the obligatory head-hopping to give Rhyme and Sachs more print in which to do their thing, future novels in this series might seem a little more like polished diamonds and a lot less like dull chunks of coal.