Cut It Out: The C-Section Epidemic in America 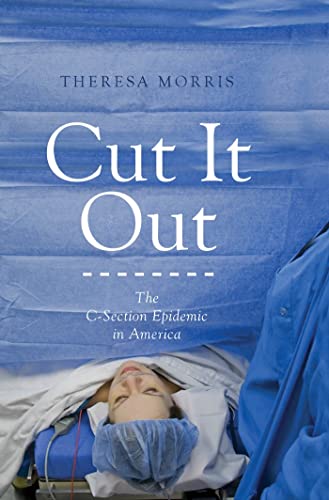 The author sets out her thesis and the major directions of her findings in a lengthy and cogently argued introduction.

She considers the number of C-sections being performed in the States—32.8 percent of women who gave birth in 2011 had a C-section—as having reached epidemic proportions. In fact, this amounts to double the number considered by the World Health Organization as the maximum medically necessary.

This number gives the U.S. a profile similar to poorer countries where health care might be expected to be less adequate. “According to the World Health Organization, countries with a C-section rate higher than 15 percent put women’s lives at risk.

While she allows that in some cases C-sections are life-savers the author considers that the majority are unnecessary and are part of a “defensive” approach to childbirth which aims to reduce the vulnerability of the hospitals and maternity providers to malpractice claims in the event of a “bad baby.”

C-sections are linked to higher rates of maternal injury and death and more dangerous to the baby than is vaginal birth. “Since 2006 several studies have been published that make clear that the out¬comes of vaginal birth for women and babies are better than the outcomes of C-section, planned or unplanned.”

In subsequent sections of the book the basic thesis is elaborated and justified with reference both to records and studies but also through interviews with “fifty obstetricians, family physicians who provide maternity care, certified nurse–midwives (CNMs), and labor and delivery nurses in Connecticut, a state that stands out for high C-section and mal¬practice insurance rates” all of whom were eager to talk to her and seemingly unanimous in their views that the C-section rate was influenced by “non-medical factors” such as fear of malpractice claims being brought against them.

Also interviewed were “eighty-three postpartum women at a Connecticut hospital. We interviewed all women the day after they gave birth. Women’s experiences are integral to this discussion.”

In the first part of the book Dr. Morris examines “the liability environment of obstetric care;” the second section looks at the paraphernalia of protocols, documentation, and control systems put in place around the birth event which she argues makes C-sections more likely and protect maternity providers from blame for “a bad outcome.”

“When protocols are followed, policies are adhered to, and guidelines are abided by, any bad outcome will be defined as “maloccurrence,” not as “malpractice.” In other words, the bad outcome will not be attributed to a medical error because maternity providers followed the “rules.”

This truth becomes quite precarious when one realizes that many negative birth outcomes will occur regardless of care. But the care a woman receives, in terms of strict following of the accepted standard of care, will allow a maternity provider to say, “It wasn’t my fault,” even when following the protocols did not prevent the bad outcome and not following the protocols would not have caused the bad outcome.

The rules reign supreme and become the overriding focus of maternity providers and hospital administrators. Ironically, although all the actors involved want perfect birth outcomes, following the “rules” in some cases will not ensure a good birth outcome and deviating from the “rules” might help a woman to attain a vaginal birth.”

This analysis is further elaborated in the third section where she discusses how these organizational constraints lead to repeat C-sections even for women who wish to “attempt vaginal birth” but who are denied that choice.”

“Because childbirth no longer belongs to birthing women, the latitude of autonomous choice they possess is determined by those who now own the proper conduct of childbirth. Women are invited to exercise unlimited autonomy within the limited range of choices presented to them by the medical profession.” In her concluding chapter Dr. Morris provides a series of measures to be taken by women, maternity providers, organizations and the government itself to stem the tide of unnecessary C-sections.

For a non-American audience it would have been useful to provide some more background as to why litigation is such a common feature of the health sector and of health care overall in the U.S. and to explore international comparisons earlier in the text.

It would also have strengthened her case had she interviewed and wider range of informants including some who supported C-sections. In terms of the increasing rate of C-sections and of maternal mortality it would have been helpful to acknowledge some of the other risk factors which may also be becoming more prevalent: obesity, hypertension, and giving birth at a very young or unusually advanced age among others.

This book retains the flavor of a PhD thesis but it is none the worse for that. It is thoroughly researched, cogently argued, and elegantly expressed given the level of detail it provides medical professionals, decision makers in the health sector, and of course actual and potential mothers and fathers who could all benefit from the information it provides.