Curvology: The Origins and Power of Female Body Shape 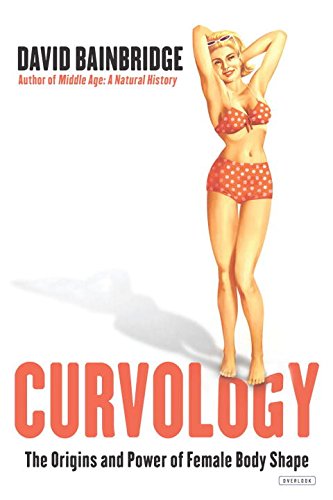 Curvology purports to take us on “a scientific journey into the evolution of women’s bodies and what that means for their brains.” Engagingly, David Bainbridge attempts to diffuse the unease or skepticism generated by the title by stating his credentials and limitations for this task upfront: “ I am a reproductive biologist and a vet, I have a zoology degree . . . I am a forty-something Caucasian male . . . I could be argued to be a dispassionate observer or a biased voyeur.” Each reader will judge for herself or himself where on this spectrum Bainbridge lies.

The inspiration for the book was two observations upon which he has pondered long and hard. The first of these being that “We are the only species in existence with curvy females . . . how did our species evolve to a point at which most females cannot run naked and unsupported without experiencing actual physical pain?” The pleasing conceit of the discomfort of the braless female runner is repeated several times in the book.

The second founding observation is that “women think about their bodies more, and in fundamentally more complex ways, than men think about theirs.” He elaborates that women’s preoccupation with their bodies is independent of a biological drive to attract a “high quality mate” though this assertion does not seem to be supported by his subsequent assertions on the “wishy-washy” nature of cultural and environmental influences.

He elects to take a “zoological” approach to answering these questions remarking that “culture and society are extremely important of course but they are changeable things which flutter around that biological core of femaleness,” which all of us have inherited through eons of sexual preference given that the evolution of our species is entirely dominated by heterosexual, child-producing unions. This appears to mean that while there is sexual selection for curvy women, body type is also inherited.

Despite his zoological bias, and in order to give mental and societal influences their due weight in explaining why women’s bodies so “obsess us,” he has divided the book into three parts: body, mind, and society.

The evolutionary biological and physiological dimensions of this discussion are the strongest and most interesting and informative. While most readers will have some notions about the adaptation of the distinctive female pelvis to the challenges of bearing large-brained, big-headed babies, the key role of the “lactation-earmarked gluteo-femoral fat stores,” and the migration of fatty depots around the body with age to reproduce a more male pattern of weight-bearing (thick waists, lean bottoms) might be less well-rehearsed. Could all of this fatty activity have something to do with why women allegedly think about their bodies more? There is so much going on.

In the sections on mind and society Bainbridge’s touch is much less deft and sometimes wrong-headed. Do men really choose younger women because they yearn for a long career as providers to their numerous offspring? The whole argument contrasting human males with promiscuous or polygamous species such as apes and chimpanzees stretches credibility.

In the presumed interests of readability bibliographic sources are not cited in the text, though a number of articles and books almost exclusively from the “zoological” end of the spectrum are listed for each chapter at the end of the book. Each chapter is preceded by two or three quotations from Anonymous (female) Interviewees, usually with their age and Body Mass Index also stated. Large stretches of the book have the appearance of speculation rather than science except in those sections where the author is on his own zoological turf.

Rather than being revolutionary Bainbridge’s approach seems controversial only in being profoundly conservative not to say reactionary. His relative neglect of broader social and economic factors leads him to conclude that women’s only route to enhanced social status is through heterosexual union for reproductive purposes, that all high status males are all-round impressive specimens of humanity.

Any reader who is looking for a balanced presentation of the influences of nature and nurture on sex and gender relations will inevitably be disappointed, though in taking such a relentlessly binary approach to this discussion Bainbridge can be congratulated on bucking current trends that place sexual and gender differences along a spectrum and see the influences of nature and nurture as closely entwined from the outset.

Bainbridge has a fluent and amusing style though it requires familiarity with this particular ironic approach not to be misled or offended by some of his satirical flourishes—perhaps better suited to a blog than a book (“All fat is not created equal, and therein lies the key to women’s distinctive and varied contours.” “Fat is inseparable from femininity.” “No matter how much we might wish to escape from the notion of biological determinism, evolution is not feminist.”).

Tighter editing could have made the thread of his argument stronger and reduced the repetitions and contradictions which are ever-present traps when working across such a vast canvas. A good example of his style reads as follows “Men hunted, and women sat around on their lardy bottoms lactating and picking a few berries, or so went male anthropology’s story.” One waits in vain for a heroic counterargument to this vivid picture only to learn that “in hunter-gatherer societies women were inevitably constrained by pregnancy, lactation and child care” and in some societies they didn’t even manage to contribute a few trifling berries.

However, in concluding and as is his practice throughout, Bainbridge hedges his bets at least with regard to women: “Increasingly, everywhere there is variety—some women challenge the prevailing ideal, some are homosexual, some choose partners from cultures with different body ideals. Our species is changing at an unprecedented rate, and we do not yet know if we will wish to drag our ancient urges and chauvinisms along with us on the journey. The ages old power of the female body shape is strong, it lies deep within us all, and taming its power will be the ultimate test of human self-determination.”

It is not clear who is the target audience for this book, but if it falls into the right hands it may well lead to a reaction against “ancient urges and chauvinisms.” Otherwise we await a companion volume on the linearity of men with impatience. Perhaps we will find out whether or not male humans are the only males who cannot run naked without support?