The Curve of the World: Into the Spiritual Heart of Yoga, A Memoir (Memoir Series) 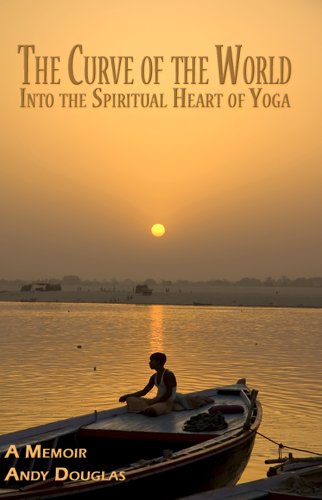 “Illness and disease force one to separate the gripping and material mind-body connection, summoning forth a previously unknown strength of spirit. This launches one on a sojourn through a higher and all-encompassing process of healing.”

Illness and disease force one to separate the gripping and material mind-body connection, summoning forth a previously unknown strength of spirit. This launches one on a sojourn through a higher and all-encompassing process of healing.

Upon an individual’s return, the material world awaits, offering up a new consciousness of the infinite. This inward journey reveals an essentially divine spirit, and we become whole in the realization of our own truths.

Living in this awareness is tantamount to dwelling in the tantric mystery that is yoga, in which living occurs on a perceptual curve where the spiritual abides and expresses itself through our material universe. But The Curve of the World: Into the Spiritual Heart of Yoga, A Memoir by Andy Douglas fails to tell that story.

For a decade beginning in 1982, Andy Douglas, a 21-year-old University of Texas student finds himself living the youthful search for truth. He is practicing meditation in Bangkok, Thailand, as a margii disciple at the feet of his guru, Prabhat Ranjan Sarkar, who founded the organization of Ananda Marga.

AM, as Ananda Marga is called, uses a yoga style comprised of meditation and Sanskrit rhetoric through a series of training centers where acharyas (teachers) teach and are otherwise active in PROUT, an acronym for Progressive Utilization Theory, throughout the eastern world as an alternative to communism and capitalism.

As Mr. Douglas informs us:

“. . . I’d come prepared, mostly, for this spartan existence. The little I’d brought with me from the U.S. was more than enough for my needs: two pairs of pants, four shirts, my father’s Zeiss-Ikon single-lens reflex, Hawthorne’s Twice Told Tales, a small cassette player, and a copy of Cat Stevens’ Greatest Hits.

“Openness to simplicity, I discovered, would serve me well here. The monks had a word for this. They called it aparigraha, which translated roughly from the Sanskrit as ‘treading lightly on the earth.’ . . .”

Soon the author finds himself questioning the guru-disciple relationship and interpretations of surrender while his life choices open him to mystery and an unexpected closeness to Baba, as Mr. Sarkar is affectionately known.

Indeed, Mr. Douglas moves to Calcutta, getting more involved with his guru and the PROUT political philosophy. Eventually, when he makes a commitment to work directly for PROUT, the organization sends him to their Tokyo newspaper office. Before leaving Calcutta for Tokyo, Mr. Douglas is already feeling symptoms of intestinal illness.

Mr. Douglas offers us concise colorful descriptions of life in Thailand, India, Japan, and Singapore while drawing for us a picture of the changing political culture and Baba’s politico-humanist agenda as a response to the squalid poverty and economic inequality.

In 1986, after a year in Tokyo, Andy Douglas moves to the Philippines where he enters the training center for becoming an acharya. Life is difficult in the training center, and Mr. Douglas becomes extremely weak with a foot infection, loses 40 pounds during a four-week hospital stay, and is released but never actually recovers.

From this point forward Mr. Douglas manifests a protracted series of weakening chronic illnesses and hospital stays with no cure in sight. Finally immobilized, Mr. Douglas is hospitalized for many weeks and diagnosed with hepatitis. After an intense and lengthy climb up the organization’s hierarchy, through his daily pain and chronic illness Mr. Douglas is unable to take his exams to become an acharya and is emotionally devastated.

It will take a year of rest in Singapore before Mr. Douglas recuperates to the point where he can travel back to India for his final exams.

“On a level beyond my control, something had waited for me, floating, something which would have a great impact on my long-term health, a reckoning of accounts for which my immune system would claim insufficient funds. I hoped, as a new acharya, to come out of the gates running, to make my mark, to please my guru. I would go on to India for my final acharya exam, and then to my posting in South Korea. I would throw myself into the work and accomplish many things, but always with the companionship of pain, fatigue, and a body that couldn’t quite do everything I wanted it to do.

“Perhaps the lesson to be learned was the inevitability of human frailty, of physical breakdown. If so, it was a hard lesson.

“For now I floated.”

The Curve of the World: Into the Spiritual Heart of Yoga is a wholly unsatisfying and disappointing read because it never meets the promise of its title. Following chapter two, the work clearly illustrates the growth and internal structure of a political organization while the spiritual heart of yoga drops off the map.

As he did in life, in the book Mr. Douglas relegates his illness to the background and his political activities to the foreground.

The Curve of the World might have been written as the illuminating story about a spiritual sojourner stricken down by a life altering devastating disease who becomes the proverbial phoenix rising out of the fire with a new universal awareness gifted to him through the tantric process of yoga.

And perhaps a personal spiritual healing is at the heart of the story; if so, this aspect is hidden. The Curve of the World chooses to focus on the political business of PROUT, and if Mr. Douglas had not promised otherwise with the title of the book, perhaps that would have constituted a fair choice. As it stands, the book’s title and first two chapters are completely misleading as to The Curve of the World’s true focus.

Youngbear Roth (YB) is a journalist, academic research scientist in mental health, and an Integral Yoga therapist. His feature articles have appeared in such magazines as Massage, Tathaastu, and L.A. Yoga.