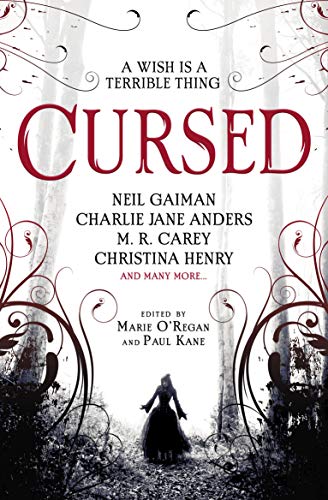 The world of fantasy is alive with short fiction, and those wild-growing stories are bundled together by a league of anthologists who carefully arrange tales by theme. In a crowded market, an author’s name, carefully teased on the cover, can make all the difference. Cursed, like not a few anthologies before it, bears the seductive promise on its cover: Neil Gaiman.

Fantasy-horror fans gasp. They rush forward, ready to buy, grabbing at the book.  Only later, sitting at home, do they discover that Cursed is like so many collections before it. It does contain a Gaiman story, but not a new one: “Troll Bridge,” almost 30 years old (though still a magnificent piece of writing) peers up from the number-three slot on the Table of Contents. (“Troll Bridge” and “Chivalry” remain Gaiman’s mostly widely anthologized stories.) Sorry kids: no new work from Neil. And if you’re a devotee of his tales, you already have multiple copies of this one.

That disappointment aside, Cursed is a fine collection. It features genre stalwarts like Jane Yolen (author or co-author of no fewer than three of the included pieces), playful gender-bender Charlie Jane Anders, and slipstream master Karen Joy Fowler. For the unfamiliar, Gaiman’s “Troll Bridge” modernizes the obvious tale, and haunts every new reader.

Christina Henry’s “As Red as Blood, As White as Snow” belongs to the long tradition of updated fairy tales edited volume after volume by Ellen Datlow and Terri Windling. (The first such anthology carries a variant of that title, and featured Gaiman’s included story.) A powerful stepmother-queen steps into a Snow White story, not to poison the daughter but to destroy a toxic prince: “I am tempering the charm so that it will not poison you to sickness. It is just enough to make [the prince’s] ring sick of your blood. But you must only eat one bite of the apple a day, and take care that the ring does not see you doing it, for anything the ring sees so too will the Prince see.”

This deep into the forest of reimagined fairy tales, there’s limited mileage in rehashing the core Grimm fairy tales made popular by Disney. They’ve been deconstructed so often that little of the original structure remains. More is possible in Catriona Ward’s “At that Age,” an eerie update of Hansel and Gretel. Beautiful twins draw in an under-parented boy, leading him down a dark path: “Daisy cooks. She makes things John has only read about in old books; stuffed marrow followed by trifle. He didn’t even know you could get marrow anymore. He eats everything he is given.”

Jen Williams’ “Listen” offers something even better: a story all bloody and without its roots showing. This is the story of a curse, barely recognizable as that of Artemis and Actaeon. No deer hunters here, but instead a gesture of revenge that encompasses both the object of the curse and its caster, trapping them in a centuries-long horror.

The stories in Cursed are at their best when they focus on the title, and not the broader fairy-tale theme. Thirty-odd years into the anthology project, fairy tales are exhausted. Some originality is possible by shifting focus. What Cursed needs, though, is what nearly all of these collections need: a new perspective. By drawing from core writers of the fantasy market, O’Regan and Ware have excluded those writers who work outside the mainstream. A more global range of authors would offer innovation and originality that are largely absent here.

Cursed, finally, is a book to go on the shelf with dozens of books like it. It offers friendly fare for readers seeking more of the same, and frustration for those seeking real difference.