The Cure for Hate: A Former White Supremacist's Journey from Violent Extremism to Radical Compassion 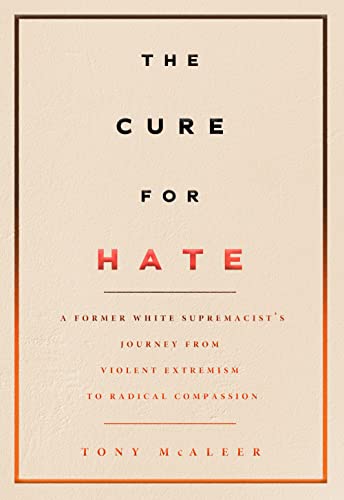 “In the post-Charlottesville world where the President of the United States continues to enable these “very fine people” with a deliberate blind eye to the intensity of their hate, McAleer’s story and call to action is the right book for these difficult times.”

It is easy to affix the surge of white supremacy and violent racism around the world to the 2016 election of Donald Trump—and rightfully so. His reactions to violent white supremacists marching through the streets of Charlottesville—where protestor Heather Heyer was killed by a domestic terrorist who drove his car over her like a bomb on wheels—was incomprehensible to any rational mind. Two days after Heyer’s murder, the embattled president held an impromptu and unhinged press conference, declaring that in Charlottesville there were “very fine people on both sides.” The white supremacists could not have been more thrilled. David Duke, former Grand Dragon of the Klu Klux Klan, tweeted “Thank you President Trump for your honesty & courage to tell the truth.”

The worldwide river of blood spilled in the name of white supremacy is now a touchstone of nouns that need no explanation. The Tree of Life synagogue in Pittsburg. The mosques of Christchurch, New Zealand. The Walmart of El Paso. And so many others.

But the presence of white supremacist and Nazi groups is nothing new to our culture. Though it goes through periods of dormancy, the hatred always finds ways to organize and unleash. The German-American Bund of the late 1930s dreamed of a Nazi flag flying over the White House. George Lincoln Rockwell, a WWII and Korean War veteran founded an American Nazi Party during the 1960s. Duke made the movement seem respectable in some circles when he was elected as a representative to the Louisiana statehouse in 1989.

The harsh reality is that these groups do not appear from nowhere and are not filled with fringe extremists. There is an international presence, connected by rage, fueled by hatred, and propagated through a targeted use of modern technology. “Nobody becomes Adolf Hitler overnight: there is a learning curve, a progression, a desensitization,” writes Tony McAleer, a once loyal soldier and then leader of the movement, in his book The Cure for Hate: A Former White Supremacist’s Journey from Violent Extremism to Radical Compassion.

In this long dark search of his own soul, McAleer tells an unflinching tale of how he grew up a troubled kid seduced by the excitement of the white power underground, then evolved from a hardcore fascist to a man devoting his life to help others get out of the movement.

McAleer’s father was a psychiatrist and his mother a flight attendant. After catching his father in the midst of an adulterous liaison in the family basement, McAleer broke from his family, searching for a loving bond through other means. It made him an ideal target for white supremacists who saw potential in this alienated kid.

McAleer had a gift for organization, which made him an ideal recruiter for other lost boys like himself, both in the streets and throughout the digital world. White supremacists were among the first to embrace the unifying reach of the internet, as McAleer writes, which was seminal in connecting neo-Nazis and fascists, first in his home in Canada, and eventually worldwide. McAleer rose to the top, working with the notorious Richard Butler, founder of the violent semi-covert army Aryan Nations.

As a leader in the movement, McAleer enjoyed the power he had to influence others and in a perverse way felt the love he always yearned for as a child. A different kind of love was his key to escape. He became involved with another white supremacist and together they had two children. Again McAleer’s perspective was radicalized, but this time for the better. Through the eyes of his children McAleer looked at himself and asked the hardcore question: Who am I?  “Having children was utterly transformative,” he writes. “I came to an understanding that it was safe for me to love then, so I could let my guard down and my heart could start its overdue thaw.”

Another factor played an important part of this process. McAleer’s children witnessed their father undergo a savage beating from two other white supremacists. He considered retaliating with an assault weapon. For his kids’ sake, McAleer chose a more reasoned direction. He felt not only a psychological need to leave the movement, but spiritual one as well. As part of his disengagement he went to a Buddhist retreat, something McAleer wouldn't have considered just a few years earlier. Counselors encouraged him to delve deep into himself, find the young man he once was, and give that inner child a break from a personal flagellation as payment for his sins.

Acceptance and forgiveness of one’s self—certainly no easy tasks—were emphasized. McAleer surrounded himself with people who understood where he had been and his strong desire to extricate from that mindset. He writes with deep feeling about visiting Auschwitz, led by a tour guide whose family members perished there. His transformation from Holocaust denier and advocate for killing Jews had an emotional and physical collision. “I felt that disgust and revulsion deeply connect to my previous activities, and I had to own those feelings at a deep emotional level,” McAleer writes. He embraced the Jewish concept of tshuvah, a personal atonement that leads to the spiritual return from the world of sin to the world of healing. His talents for reaching out to others metamorphosized him from hate leader who once vandalized synagogues to becoming a welcome speaker in their sanctuaries.

McAleer’s prose is compelling in its simplicity. He blames no one other than himself for his actions but periodically steps back from the narrative to analyze the psychological factors that led him to embrace each new element of the ferocious underground step by step. He ends his story with a new beginning: the founding of the non-profit group Life After Hate and his innovative crusade to help others extricate themselves from the life of white supremacy and racist-fueled violence.

In the post-Charlottesville world where the President of the United States continues to enable these “very fine people” with a deliberate blind eye to the intensity of their hate, McAleer’s story and call to action is the right book for these difficult times.