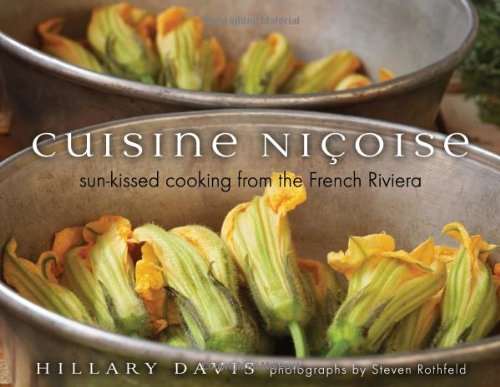 Some books can win a reader over by simply looking “right.” Cuisine Niçoise does just that: This lovely book design perfectly fits its theme of French Riviera cooking and the sweet, slightly mysterious stories that go with the recipes.

Without getting precious, author Hillary Davis takes readers in to a life that sounds sun-kissed year round.

Better yet, the recipes meet the expectations the design sets up. Some of the recipes will feel familiar to experienced and well-read (or well-traveled) cooks, but readers will forgive those for their evocative headnotes. And many others provide startling twists. You may have made a cold cantaloupe soup before, but did you top it with a raw beet salad? And was it as simple as this recipe, with just seven ingredients and eight sentences of instructions? (Readers weary of many of today’s cookbooks that call for components pulled from multiple other recipes will appreciate the self-contained nature of even the longer recipes in this book.)

Ms. Davis, who lived in the village of Bar-sur-Loup for 11 years, notes that even after traveling extensively, living in Paris for two years, and spending years cooking from books on the cuisines of Normandy, Alsace, Provence, and other regions, she had never encountered the term “cuisine Nicoise.”

Seeing Niçoise style as “the most ideal culinary match of Italian and French traditions,” Ms. Davis decided it needed larger exposure in a cookbook of its own. Unlike the cooking of other French regions, which can be found elsewhere in the country, cuisine Niçoise remains hard to find outside of the area around Nice, she says.

Have you, for example, ever had Swiss chard “sandwiches” of fried stalks wrapped around a tuna filling? As above, this has just eight ingredients (one of which is salt) and quick instructions, perfect for a casual appetizer with friends congregating in the kitchen.

Or return to the familiar; the headnote about trees “pregnant” with figs will pull readers in to a recipe for lightly roasted figs with a fig dressing. Often in these it’s the little details that matter anyway—chilled mussels with tarragon mayonnaise may not be overly exotic, but the detail of pulling off the top shells, leaving them resting in the bottom shells to serve, sells the recipe—like the bare touch of anise extract in that fig salad.

Vegetables and fish take up much of the space in this book, and deservedly so, nearly all with very simple preparations. As well as chapters on appetizers, soups, salads, pastas, and vegetables, Ms. Davis offers “easy weeknight” and “Sunday suppers” chapters, filled with more vegetables and fish, as well as some pork and chicken dishes.

Ms. Davis also includes appreciated variations on traditional recipes; for small fried turnovers known as “Uncle Johns,” she substitutes puff pastry for fresh egg pasta, baking instead of frying (though with instructions for using pasta as well). And not all the recipes come from generations of Niçoise grandmothers; Ms. Davis includes some from up-and-coming chefs as well, and includes contact information for restaurants and vendors she favors.

By the end of the desserts chapter, with its frozen fresh fig mousse with white wine caramel sauce dancing or giant mocha meringues, this golden-tinted book with its perfect illustrations and photos offers a fantasy of French village life that likely can’t possibly be as sweet and sunny as it seems—but readers will happily buy into the dream and dig into the food.