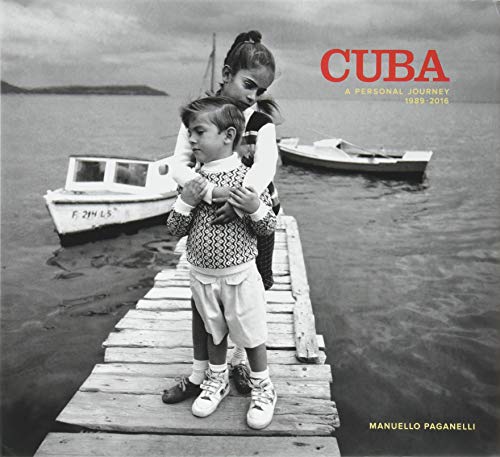 Manuello Paganelli’s Cuba: A Personal Journey, 1989–2016, begins with his story of lost family connections and trying to rediscover his Cuban roots. It is this predetermination of connection that establishes a powerful undercurrent of context for his images in documenting the struggles of the Cuban people.

Paganelli’s story is a very personal journey. It is told through anecdotes involving his relatives living in Cuba, photo captions, and diary-entries from his many trips to the island. Although the story is engaging on a visceral level, the images themselves lack an unvarnished dynamism, which are evident in other books on Cuba such as Anna Mia Davidson’s book, Cuba: Black and White. Perhaps that is because although some of the images feel like street photography they are actually photographs shot while he was on assignment in Cuba for magazines like Forbes, Time, and VIBE.

In a classic sense, street photography is born out of an insistent curiosity of the human condition, how we interact with each other, and what our societies look like as a result of that interaction. Assigned photography operates on a dictate to show a specific aspect of life or a story.

I have never been to Cuba but have spent quite a bit of time in Puerto Rico and understand the context. While the photographs accurately document the general conditions of life in Cuba, for the most part, they unfortunately fail to capture a quintessential image of Cubans that is deeply involving on an emotional level.

Paganelli’s photojournalism is more akin to family snapshots that tell a story. Rarely do they have the incisive vision of a Bruce Davidson (Brooklyn Gang) or Robert Frank (The Americans), and never to the level of a Diane Arbus. Perhaps this is due in part to the lack of a central character, an emotional center that would drive the story, as with W. Eugene Smith’s photo essay, Country Doctor. Or perhaps because the lighting, compositions, and chiaroscuro tonalities of the final image do not support the emotional context. Such is the case in the image of the butchered pig, Fresh Meat (page 142), or a man turning his mule and cart, El Panadero. Both images would have gained a great deal of power had they been printed very differently in the darkroom.

All of the images in Cuba: A Personal Journey are in black and white, which is a perfect vehicle for this story, perfect for dramatic storytelling and street photography.

Paganelli does show some truly outstanding images in the book and they are the exception to my previous comments. Images such as a portrait of Juan Gonzalez Perez; El Santero; as well as El Zapatero; and Guajiro and Canary. These are images that have real stopping power, and one lingers over these images because of their emotional impact.

Paganelli has chosen to arrange the photos according to categories, such as Daily Life, Transportation, Religion, Sports, Portraits, etc., rather than in a chronological order, and as such there is a discernible disparity of quality from shot to shot, some of which we assume were shot years apart and yet placed in consecutive order. Some photographs appear to have noticeably better technical quality, a more accomplished grasp of capturing the moment, or greater sharpness and dynamic range than others.

Overall the book presents a compelling picture in documenting the hard life Cubans endured during the years 1989 through 2016, and still suffer through, due to political circumstances in the 1960s. But one is left to wonder if Paganelli avoided showing anything unseemly or disturbing as a photojournalist because he felt compelled to show the people of Cuba at their “best” as noble and long-suffering, precisely because of his emotional ties and need to champion a worthy cause. Manuello Paganelli has written from a very personal perspective, and his book is a fascinating portrayal of a people’s determined endurance and the political price paid by families.

The book is a 12 x 11 inch coffee-table sized book and although printed on a good medium-weight paper the images are lackluster and do not impress with the quality of its printing or finish, which is unfortunate.