Cuba: This Moment, Exactly So 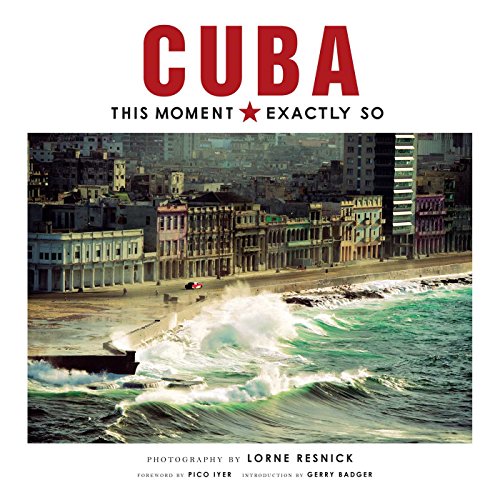 “Cuba: This Moment, Exactly So is a feast for the eyes and all the senses, celebrating the human spirit exulting in the sheer joy of living . . .”

Communists, cigars, and vintage cars probably first come to mind when we think about Cuba. Our stereotypes about the forbidden island only 90 miles off our southern shore tend to be blinkered by assumptions around a draconian socialist regime and severe economic deprivation from our half century trade embargo of the country that threw out corrupt dictator Batista and expropriated American property. So Cubans today must live in pitiful poverty as virtual prisoners under the iron fist of the Castro regime.

Yet we also hear glowing reports about free public education at all levels with a 99.8 percent literacy rate, as well as about universally accessible, quality health care which is streets ahead of the United States. And Cubans may have limited material resources, but they enjoy minimal economic inequality compared to the Western world.

Most of all, as more and more Americans have taken advantage of the Obama-era loosening of travel restrictions, word is getting back to us that Cuba is a warm, welcoming, safe, and simply fun place to visit, where much life is lived outdoors  and in community, making for a vibrant public culture.

The tropical setting is enticing, the beaches are glorious, colonial and more recent histories seem to live on in a time warp, and the culture is a simmering stew of African and Iberian roots with Latin American influences and a unique Caribbean flavor. This heady mix is exemplified musically in Cuban music such as Son Cubano’s syncretisms of Spanish guitar with Afro-Cuban rhythms and percussion. And it is music to be participated in and lived out loud with dancing in the streets and almost any public space.

Paradoxically, Cuba still shares many passions with its estranged northern neighbor, which treated the island like its personal steamy playground and economic tributary until Fidel and Che ousted the American puppet government in 1959. Baseball is the national obsession, Hemingway is still revered for his love of Cuba as much as for his writing, and lovingly maintained classic and vintage 1950s American cars are kept running with incredible ingenuity in part from necessity but also out of nostalgia.

These contradictions between our preconceptions and the exuberant vitality of life in Cuba today are exposed by award-winning fine-art and travel photographer Lorne Resnick in Cuba: This Moment, Exactly So. This lavish coffee-table production features more than 250 extraordinary color and black-and-white photographs taken on multiple visits over the last 20 years, including 16 new images not included in a 2015 edition presented in a different format paired with text.

The outcome is a visual feast celebrating the soul of the culture and the spirit of the people, sharing what it feels like to visit and live in Cuba as much as offering a vicarious travel experience.

For once, a statement from the publicity blurb does not feel hyperperbolic:

“Being in Cuba feels like falling in love with the person you knew you were meant to be with. It’s exhilarating and bewitching . . . Lorne Resnick has sought to capture the experience of being in Cuba: moments filled with passion, desire, and laughter. Those moments, exactly so.”

The photographic moments Resnick shares were shot mainly in Havana, some were taken in the colonial city of Trinidad and in Santiago de Cuba, and only a handful represent smaller towns and country scenes like sugar plantations. Overall, the body of work seems quintessentially urbane. Although his sun-drenched landscapes and seascapes are stunning works of art often with nuanced textures like paintings, Resnick’s strengths are portraits of Cubans engaged in their everyday lives against the backdrop of the crumbling but colorful building facades for which Cuba is famous.

We see young boys exulting in diving into the ocean from Havana’s waterfront boulevard (malecon). There’s a uniformed schoolboy racing down a street just for the joy of it. A man drives a canary yellow classic coupe past an old cigar factory. A woman industriously sweeps the sidewalk under a colonial arcade. Two young girls are engrossed in a game of chess. A portly man leads a group of seniors in an exercise class in an alley. Two old women share a couple of eggs through an upstairs window. A little girl rides her gaily tasseled scooter around a room in a formerly grand mansion, now empty except for drying sheets.

There are a number of photos of people engaged in sports, particularly boxing and in outdoor recreation such as fishing. But what really leaps out at the viewer is the section Resnick devotes to dance and music.

A number of these photos were taken at Havana’s world-famous cabaret, The Tropicana Club, capturing the movement, rhythm, colors and sensuous heat of the moment so that you can almost feel the pulsating music through the dancers’ expressive joie de vivre.

Other photos show quieter times. A solitary man plays a trombone sitting on the malecon wall at sunset. An expressionless old man purses his lips around his cigar, deepening the wrinkles on the roadmap of his life. A pensive young girl gazes out of the door of her home, perhaps wondering where life will take her. A couple exchange an intimate embrace, oblivious to everything but each other. Children pose for portraits wearing their blue and red kerchiefs, once the symbol of the Communist youth movement and now just one component of a regular school uniform.

In the Introduction, photographer-curator Gerry Badger notes that Resnick concentrates on portraits of the young and old, appearing to deliberately omit the middle-aged from his gaze. Is this because he is interested most in Cuba’s past and future rather than the current period of transition? Or maybe this very exclusion underscores the imperative of living in the moment, the here and now, because nobody knows what the future will bring in these uncertain times.

This book will appeal not only to photography buffs, but also to armchair travelers, those curious about the real Cuba today and people who appreciate first-rate visual storytelling.

Cuba: This Moment, Exactly So is a feast for the eyes and all the senses, celebrating the human spirit exulting in the sheer joy of living that many of us suppress under the material imperatives of our everyday lives. These photographs underscore that in many ways Cubans live richer lives than Americans. And we end up motivated to see this for ourselves before the window of travel opportunity closes again, if it is not already too late.