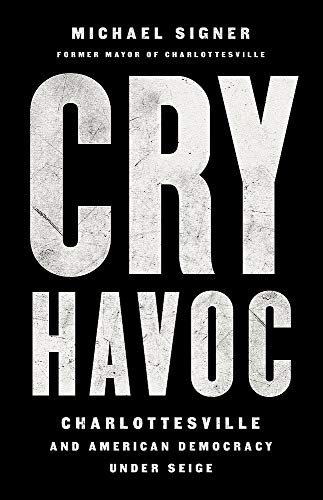 In Charlottesville, VA, a statue honoring Confederate General Robert E. Lee has stood for generations. Erected in May 1924, the larger than life figure of Lee, sitting tall and proud astride his horse, was meant to serve a dual purpose: honor the great leader of the Southern “Lost Cause” and put Charlottesville’s African American population on notice.

Though the Confederacy and all it stood for was defeated on the field of battle, the deeply ingrained culture of white superiority still reigned. To celebrate the unveiling local factions of the Ku Klux Klan held a cross burning, then paraded in their white hoods and robes through the Charlottesville streets. A brass band accompanied them. Spectators numbered in the thousands. The statue, mounted on a granite pedestal and standing 26 feet high, was unveiled in new public space dubbed “Lee Park.”

Ninety-two years later the sight of Klansmen and their supporters marching en masse through Charlottesville in support of the Lee statue was repeated. The second demonstration was a response to public calls for this archaic monument to Confederate pride be removed. Instead of cheering crowds lining the parade route, this time the white supremacist hordes were met by a multiracial coalition opposing the Lee statue and all that it represented. The confrontation became a public crucible. What ensued transformed the city name of “Charlottesville” into a touchstone word defining extreme right wing American terrorism.

“What happened on the weekend of August 11–12, 2017, in Charlottesville, Virginia, was so horrific, was such a tear in the fabric of a small city’s ordinary experience, that it strains one’s power to describe,” writes Michael Signer in his new memoir Cry Havoc: Charlottesville and American Democracy Under Siege. As mayor of Charlottesville, Signer was hurled into a maelstrom of history. His position, it will surprise many, was a part-time job, an unusual situation given Charlottesville’s position as a major Virginia city and home to the University of Virginia (UVA) founded in 1819 by Thomas Jefferson.

The move to take down the Lee statue (as well as another monument to Confederate hero Stonewall Jackson) was well underway when Signer took office. Clearly the Charlottesville of Confederate veterans and hooded Klansmen that erected the Lee and Jackson monuments was no more. The statues were reflection of an antediluvian past. Though on the surface taking down the statues was an easy decision, the nuts and bolts behind the idea wasn’t just a simple matter of a bringing in some construction workers, shop tools, and trucks. The overall process of removing and storing near century-old public monuments would cost considerable dollars that were not in the town coffers.

And then there was official bureaucracy. The administrative trail of laws and regulations requiring the removal of an official monument required navigation that could take months, if not years. As nothing could happen with any immediacy, Signer and members of the Charlottesville city council came up with an interesting compromise: change the narrative of the statues and what they stood for, both literarily and figuratively.

By unanimous vote the name Lee Park was changed to Emancipation Park, with additional plans to develop an educational space on the grounds detailing the terrible history of slavery.

No such move could be made without controversy. On the night of July 11, 2017, 50 Klan members from North Carolina came to Charlottesville, intending to hold a rally at the Stonewall Jackson statue. They were greeted by nearly one thousand counter protestors. Police were able to keep the two groups separate—no easy feat given the passions percolating through the enormous crowd.

The July situation was only the beginning. Supporters of the Lee statue included UVA graduate Jason Kessler, a former member of the leftist Occupy movement and one-time supporter of President Obama, now turned leader within the dark world of the extreme right wing and its support of white supremacy. Kessler rallied his supporters. So did another UVA graduate, fellow white supremacist leader Richard Spencer. Through their internet outreach the call was sent out. A rally in support of the statues—dubbed “Unite the Right”—would take place in Charlottesville on August 14 and 15. White supremacists throughout the country were charged up and ready for action.

What happened next was a perfect storm of disaster. It was an unprecedented gathering in modern American history, and the Charlottesville city resources were ill equipped to meet this challenge. Though coming from disparate groups of neo-Nazis, Klan members, fringe independent militias, many loners filled with hate, and other assorted white supremacists, the Unite the Right leaders were efficient organizers. Their Friday night march resembled a Berlin rally, circa 1933, complete with torches (tiki, in this case) and chants of an old Nazi slogan “blood and soil!” and “You will not replace us!” When passing a Charlottesville synagogue (where Signer was a congregant) the cries of “you will not replace us!” transformed into “Jews will not replace us!” As frightening as the scene was, this march proved to be only a warmup. The next day Signer’s worst fears came to fruition.

Signer points out that much of what happened leading up to those terrible days was a social media event. Tweets, Facebook posts, and other instant communication channels were a cesspool of ideas that didn’t require thought, only reaction. Signer himself pleads guilty to a gross misunderstanding of how social media could be manipulated and misinterpreted. His Facebook posts were reactive and not well planned: a picture of himself jumping for joy like a college team cheerleader in front of a sign read “LOVE” only made him look foolish.

Another overwhelming factor clearly emerged in the days leading up to the march and its ugly aftermath: President Donald Trump. Signer pulls no punches in his contempt for the current occupant of the Oval Office. “I’m not going to make any bones about it,” he says. “I place the blame for a lot of what you’re seeing in America today right at the doorstep of the White House and the people around the president.”

Even after a white supremacist terrorist deliberately drove his car into a crowd of counter protestors, injuring many and killing Heather Heyer; and the deaths of Virginia state troopers H. Jay Cullen and M. M. Bates who were killed when their helicopter monitoring the scene crashed, there was only silence from the White House. The Charlottesville terror unfolded in real time on national television. Yet, despite calls for the president to take action, Trump was silent. However, Signer was contacted Tom Bossert, a White House homeland security adviser. “He offered me some bland generalities and said a call from the president might be forthcoming,” Signer writes. “Yet there was no call from Trump.”

In the meantime David Duke, a longtime and well known Klan leader who had supported Trump’s 2016 campaign, gave a statement to reporters. “This represents a turning point for the people of this country,” Duke declared in the midst of the riots. “We are determined to take our country back, we’re going to fulfill the promises of Donald Trump, and that's what we believed in, that's why we voted for Donald Trump, because he said he's going to take our country back and that's what we gotta do.”

It wasn’t until Tuesday, August 15, that the President spoke about Charlottesville, at an impromptu press conference held in the lobby of his eponymous New York tower. Though it was clear that the Unite the Right protestors were an amalgamation of white supremacists, KKK members, and neo-Nazis, Trump declared that the majority of marchers were a well-intentioned group that only wanted to protect the Lee statue as an important part of history. Trump even compared the removal of the Lee statue to a hypothetical confiscation of a George Washington memorial. “They didn’t put themselves down as neo-Nazis,” he added. “And you had some very bad people in that group. But you also had people that were very fine people on both sides.” Not once did President Trump mention Heather Heyer or Troopers Cullen and Bates.

Signer’s book is fueled by anger. His wrath is directed at many: the crowds of domestic terrorists and their leaders Kessler, Spencer, and Duke; Trump and his enablers; and black clad members of the leftist group Antifa, who were determined to spread anarchy while battling the white supremacists. People came to city council meetings with single minded intentions of disrupting the proceedings. When Signer insisted that meetings would be conducted by Robert’s Rules of Order, he was called a “fascist” by people from both the left and the right. The siege went beyond the public arena into the mayor’s personal life: anonymous emails and tweets poured in with threats to harm Signer’s family. His contempt for all these people seethes throughout the book.

But Signer also uses Cry Havoc to settle political scores. He raises particular ire with Charlottesville City Councilor Wes Bellamy, who Signer feels did not do enough in the days leading up to the march to help prevent the potential for civil unrest. Bellamy, for the record, disavows Signer’s story of what happened and wrote his own account of the events, which was published as a Kindle single. The facts most likely stand somewhere in between the two men’s stories. The cliché is true: in war the first casualty is truth, and what happened in Charlottesville was war.

Cry Havoc works best when Signer gets into the march and the riot that ensued. Too often he gets bogged down in the minutia of bureaucratic procedures that circle the main event. Signer also relies too much on metaphors, particularly the idea that the various elements before the Unite the Right riot were a series of brushfires that grew into an uncontrolled blaze. It makes for tedious reading in what should be a compelling page turner. At times Signer’s story feels like a magazine article about the Unite the Right rally and its immediate aftermath, padded out to book length.

Ultimately Cry Havoc is a frustrating book. Signer has much to say but his subject deserves a better narrative.