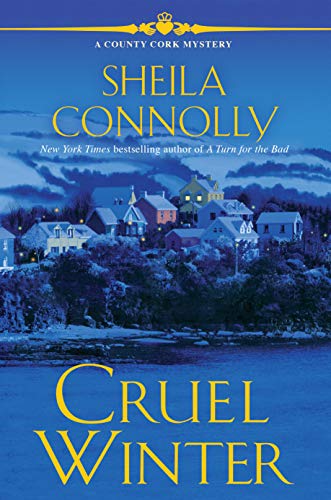 Snow is a rarity in Maura Donovan’s small village of Leap, in County Cork, Ireland, so she’s caught unaware when a major snowstorm rolls in around Sullivan’s pub—hence the no wearing of a coat as she enters the premises, alarming barman, Mick Nolan.

“You’ve no coat? It’s winter now isn’t it? And you from Boston.”

Maura had left Boston after the death of her grandmother and made her way to Ireland as a last request from the grand old lady to say her farewells to anyone who still remembered her all those decades ago in the tiny village. Maura had packed lightly, believing she would be in Leap no more than a few days before returning home to her beloved Boston.

That was almost nine months ago. In all that time, she had inherited Sullivan’s pub, and a house on the hill, all from a distant relative of her grandmother, Old Mick Sullivan. Knowing little or nothing about pubs, Maura depends on the help of locals, Mick, Jimmy, and Rose, who also happens to be Mick’s daughter.

As the evening progresses, other local patrons begin to enter the old pub, some for their habitual thirst wetting, but some because of the predicted snowstorm as alerted by local radio and TV. Better to be in a secured structure such as Sullivan’s than to stay at home wondering if the roof and walls are going to come tumbling down upon them like the Walls of Jericho!

Among those taking shelter is a middle-aged woman with an English accent. The woman is not known by Maura, but from the cold stares the stranger is receiving from the others, Maura quickly deducts they not only know her, but don’t want anything to do with her.

When Maura inquires of Mick the barman about the woman being rudely treated and practically ostracised, he quickly informs her that she is the infamous Diane Caldwell, a suspected killer allegedly involved in a ghastly unsolved murder almost 20 years ago in the village.

The victim’s name was Sharon Morgan, a neighbour of Caldwell’s. Both Morgan and Caldwell had lived in England, and each owned a holiday cottage in the village. Morgan had been found stabbed multiple times and left in a pool of blood.

It had been alleged at the time, that Caldwell’s husband was having an affair with Morgan, so motive had been firmly established. Yet the cops failed to unearth any forensic evidence linking Diane Caldwell to the grisly murder. She was questioned constantly by the cops, but never arrested.

Prior to the murder, crime of any scale to the villagers was a rarity in their small community, so for a murder to be perpetrated on their own doorstep was devastating, shaking their belief in the cohesiveness of their village. The fact the murderer escaped justice, and is still able to roam their streets freely at-will only helped compound a sense of betrayal and suspicion.

Some people might relish the thought of being in their local pub on a stormy night, but obviously having a suspected murderer, one who is allegedly handy with a knife and bloodletting, sitting beside you in the gloomy darkness may dampen that enthusiasm somewhat, causing you to nervously look over your shoulder as the unhurried hours tick away.

Which is exactly how the locals are feeling. They’re not too happy to be trapped inside with Caldwell, but they have little choice but to remain. The snow has now more or less ice-cubed them inside the pub, sealing them as de-facto prisoners in their favorite waterhole. No one will be leaving until at least the early hours of the morning. If even then . . .

To try and ease the tension, Maura believes Diane should be given the chance, if she wishes, to help clear the air and set the record straight. Another customer, Bart Hayes, who was a young cop at the time of the murder, will be keen to hear what she has to say and hope to discover some parts of the missing puzzle.

After 20 long years, will Diane be willing to talk and reveal what she knows? And if she didn’t murder Sharon Morgan, who did? Will the villagers be able to live with new, possible devastating revelations, if Diane’s words point them at a new suspect; a suspect perhaps sitting among them tonight?

A crafty and marvellous twist to the classic whodunit, Cruel WInter is the fifth in the County Cork Mystery series from bestselling New York Times author Sheila Connolly. Atmospheric with no let-up in the tension and drama it’s a totally captivating page-turner of a book, perfect for winter nights with a storm beating against the windows.