The Crowded Hour: Theodore Roosevelt, the Rough Riders, and the Dawn of the American Century 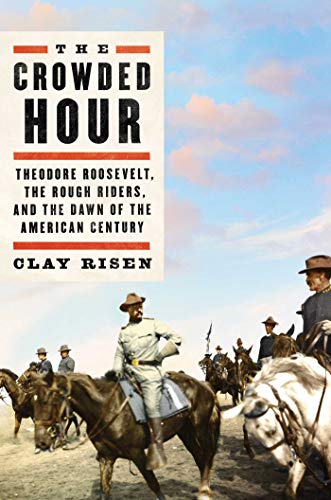 “The Crowded Hour, with a rousing narrative, does Roosevelt justice, but it serves even better in explaining the 1898 war."

Books on Theodore Roosevelt, always popular, have recently enjoyed a renaissance. Clay Risen's The Crowded Hour tells of how Roosevelt and his 1,000-man volunteer regiment, the famed Rough Riders, "captured the national imagination."

The Crowded Hour begins with a massive unprecedented celebration in New York City on September 29–30, 1899 not, author Clay Risen argues, for American's victory in the brief war with Spain as much as "a new, confident global American Empire." Theodore Roosevelt and others envisioned "a nation brought together by common values and a mission to bring those values to the world."

In that parade, New Yorkers also celebrated their local celebrity Roosevelt, "naturalist, historian, war hero, and now governor of New York." Within two years, he would become president of the United States.

The Crowded Hour includes detailed background on Roosevelt and the war. The last of Spain's Empire fell apart in deadly rebellions. Its end came in 1898 "because America was at a turning point." Its population exploded from immigration, it had just recovered a deep economic depression, and "a collective soul-searching about America's place in the world and each citizen's place within that quest.

Risen explains how the war  in Cuba war began because the United States Congress, to deal with Panic of 1893 created an economic downturn in Cuban by rain taxes on sugar imports. "This time, both sides [in the Cuban revolution] pursued a scorched-earth strategy."

The Crowded Hour attacks many misconceptions. The war was anything but "splendid" or "little." Thousands more Americans died from disease than bullets, often in training camps in the southern states.

The American battleship Maine "was only marginally more powerful than some of the Spanish navy's best ships." Spain's army outnumbered America's regular army "about five times as many in Cuba." The battle for San Juan Heights had no meaning beyond making Roosevelt a national hero.

America's war with Spain did not come about from the sinking of the Maine in Havana Harbor on January 25, 1898. That incident did led to Senator Redfield Proctor calling for "righteous interventionist sentiment" and "a dam seemed to break in the remaining opposition to war." Although Spain "offered to enact real reforms" and "to suspend hostilities," American fervor for war became too much to stop.

America's initial involvement lasted less than six months, but the war had covered some seven years, "left at least 200,000 dead," and "many died of torture and in concentration camps at the hands of Spanish and American troops." The Spanish also exiled Cubans to Africa and used starvation as a weapon.

Risen does not give Roosevelt a pass on race, an interesting aspect with the modern trend of attacking ghosts of heroes past on that issue. The hero of San Juan Hill Heights "enforced its [America's] exclusion of its population behind disenfranchisement and Jim Crow."

The Rough Riders (the First United States Volunteer Cavalry) similarly represented "a type of American 'unity' that excluded blacks, Latinos, and women." "Not coincidently, there was never even the suggestion of including African American soldiers in the unit, despite the availability of thousands of black veterans." The Rough Riders did serve with the black soldiers of the regular army at Tampa and in the Cuban campaign.

No longer living in an isolated frontier, thousands of Americans traveled abroad. Wars sell newspapers, and America's media promoted this war, even "recounted fictional battles" and "simply rehashed rumors and made up stories." "Most of the 100 reporters who traveled with it [the American military] to Cuba felt no special urge to reveal the ugly truth behind the expedition."

The ever-enthusiastic militant, "one didn't just listen to Roosevelt, one felt him," Theodore Roosevelt was planning for the war with Spain and the creation of the Rough Riders, before the war began. He plotted and planned, while serving as assistant Secretary of the Navy and reforming that department.

The Rough Riders, "drawn from all walks of life and all parts of the country," and their camp in Texas became a media sensation. "They represented a quintessentially American story: ragtag, provisional, drawn from the country's vast distances and disparate communities, forged by patriotic fervor and sent into the world to fight for what was right." "Roosevelt took no small satisfaction in having the spotlight cast on him and his fledgling regiment."

Most of the book covers forming the Rough Riders in San Antonio, such decisions as smokeless powder, the size of the whole expedition, the mismanagement of the army, and the political reasons for using Tampa as the point of exit. "The bigger enemies, more so than the Spanish, were heat, disease, rats, and rainstorms."

"There was no plan" could have served as a campaign slogan. Risen, however, goes into detail of how the troops starved and otherwise suffered from failure to move supplies. "The problem was, the American Army was anything but efficient."

In the climactic battle, the Spanish army had better weapons, but they defended an isolated ruined Santiago that every day becomes more unsustainable. Both armies suffered from incompetence, inexperience, hunger, and disease. Finally, Roosevelt with his Rough Riders charged the Spanish regulars fortified at San Juan Heights, "no rank, no order, just a halting, furious run up the hill, cheering, jostling and falling along the way."

The Crowded Hour, with a rousing narrative, does Roosevelt justice, but it serves even better in explaining the 1898 war. This book has ample and appropriate illustrations, endnotes, an organizational chart of the army, and a bibliography.